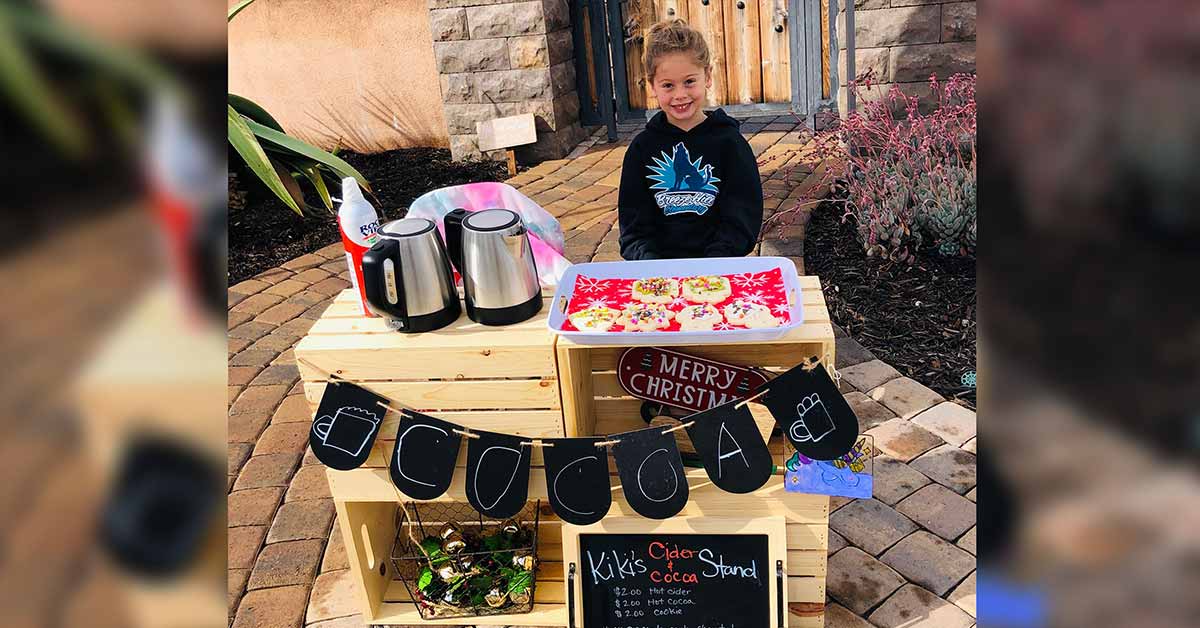 “To teach a child kindness is to make the child a rainbow. Wherever she goes, she spreads love and creates other little rainbows.” – Anonymous

Five-year-old Katelyn Hardee was upset when she heard a mom at an after-school program say she couldn’t pay her child’s outstanding lunch bills. Hardee goes to school at Breeze Hill Elementary School in Vista, California. The sweet girl began to ask her mother what she could do to help pupils in need at her school.

“I just tried to explain to her that sometimes people aren’t as fortunate and that we need to try to be kind and give when we can,” her mother, Karina Hardee told CNN. [1]

Karina helped the five-year-old set up a hot cocoa stand where she sold cocoa, cider, and cookies to her neighbors for $2. She started her ‘business’ on December 8, and before school was closed for the holidays, she donated her entire profit of $78 to the cafeteria. She had received $30 from a family friend who was touched by the child’s determination.

The outstanding lunch balances in the school totaled $616.85. Katelyn was able to pay $78 for 123 students to be taken off the roll.

The staff and pupils of Breeze Hill Elementary were amazed when news of Katelyn’s altruism got out. It had such a resounding effect that other children began to think of ways to help their community and spread kindness all around them.

“Everybody is just so proud and happy and other students are already talking about ways they can also make a difference,” said Principal Lori Higley. “It goes to show that even one small, kind act from a five-year-old can mean the difference for someone in their life.”

“[We’re] very proud. Both my husband and I are just amazed Katelynn’s cutest thing she said was she didn’t want her friends to have ‘rumbling tummies,’” her mom told Good Morning America. [2] “She wished her friends could have lunch and snacks no matter what.”

Katelyn isn’t backing down. She told GMA that she planned to host a mega hot cocoa sale on Saturday, December 21. She hopes to raise enough money to clear the 1,206 negative lunch balances in the entire Vista Unified School District. This will be after she’s cleared the remaining 93 balances at her school, Breeze Hill. She’s also receiving donations in a crowdfunding account from people who want to help in her mission: #KikisKindnessProject.

“I started crying,” Breeze Hill’s cafeteria manager, Teresa Sharp told KGTV in San Diego. “I couldn’t believe that a five-year-old could think of doing something like that.”

The little girl plans to use some of her earnings to support school programs about to be scrapped due to budget cuts.

“Her one kind act has rippled and affected the community,” Hardee said. “It’s starting conversations [around] food for kids. Especially this holiday season, and with everything that’s going on in the world, we just need a little bit more kindness out there.”

Katelyn is a loving elder sister to Lardon Hardee, 2.