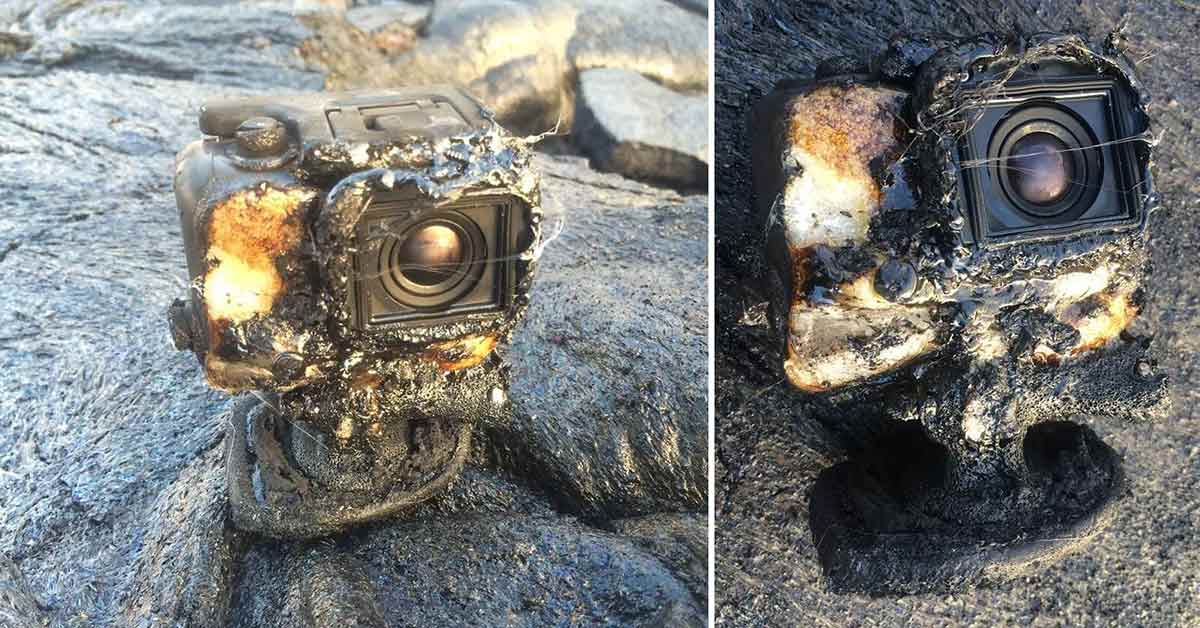 This is probably one of the most up-close views of lava anyone has even captured. Some of the best flowing lava videos and images we see online were captured by drones flying over the fiery hot fluids at a safe distance. Flowing lava beds burn at almost 1000 degrees Celsius, hot enough to burn through almost anything and set fire to bushes and trees.

This is why it was a shocking surprise in 2016 when the video of a camera surviving and recording a lava attack went viral online. [1] GoPro cameras are often said to be indestructible, and the company just got all the proof they need.  The incident occurred in 2012 at the Hawaii Volcanoes National Park in Big Island, when a photographer set his camera down to capture the intense flows from a suitable angle. Sadly, the lava flowed faster than it usually did and his precious camera met a fiery demise.

Erik Storm is a professional photographer and tour guide who owns the Kilauea EcoGuides, a Hawaiian tour company that provides guide services to volcano-enthusiastic tourists. He also serves as a professional guide to photographers aiming to capture the best pictures of the volcanoes during eruptions and afterward.

Just as he had done several times before, Storm wedged his camera between two rocks where it would have the most extensive view of the flowing lava. He continued his tours with excited tourists and forgot all about the $400 camera. He wasn’t worried because he had done this lots of times before and the lava always flowed very slowly.  Sadly, that day in August, the flows were much faster, as though they had somewhere to be. When Storm finally whipped his head around, his GoPro had gone to rest in red-hot peace.

“I was telling a story when the molten lava completely engulfed my GoPro (with housing on) and it caught on fire. We never intentionally would put anything in the path of the lava,” Storm says. “That was a $400 mistake.”

Survival of the fittest

The GoPro was pulled out much later when all the lava had cooled to form rock and the case was safe to touch with leather gloves. Storm had to use a geology rock hammer to hack the camera out of the crevice since it had been molded into the rocks. After that ugly extraction, he though the item had been completely damaged.

While the camera’s waterproof casing and most of the exterior had been destroyed, the lens and the SD card managed to survive.

He later released the remarkable video showing how the lava slowly crept into rock crevice where he had wedged the camera. It was mesmerizing to watch the reddish-orange fluids — bright, fiery, and coated on top with traces of still-melting rock — as it crept toward the camera. Finally, the lens was engulfed and we see flickering images as the lava boiled over the crevices.

From the video, a man can be seen approaching the camera to remove it from the rocks. Storm said the Wi-Fi light of the GoPro continued to blink even after the lava bath it just had.

“The camera even still worked although not as well as it did before. Truly amazing it survived.”

Storm later sent the surviving part of the camera to a technology recycling center and has acquired three more GoPros ever since.

Touching the lava is a taboo to the locals

Storm explains that he had no intention of altering the flow of the volcano with his camera. To the Hawaiian locals, the volcanoes are sacred, almost “like church,” and having his camera in the way of the flow is equivalent to desecrating a holy place.

“I respect the place where I work to the fullest and work hard to make sure people understand that this is a very sacred place that commands respect,” Storm said to National Geographic. [2] “We want the whole world to know how sacred and special this place is.”

“If you’re going to come to the active volcano, we just ask people to respect the place and not touch the lava” Storm called the GoPro incident, an “honest accident on my part.”