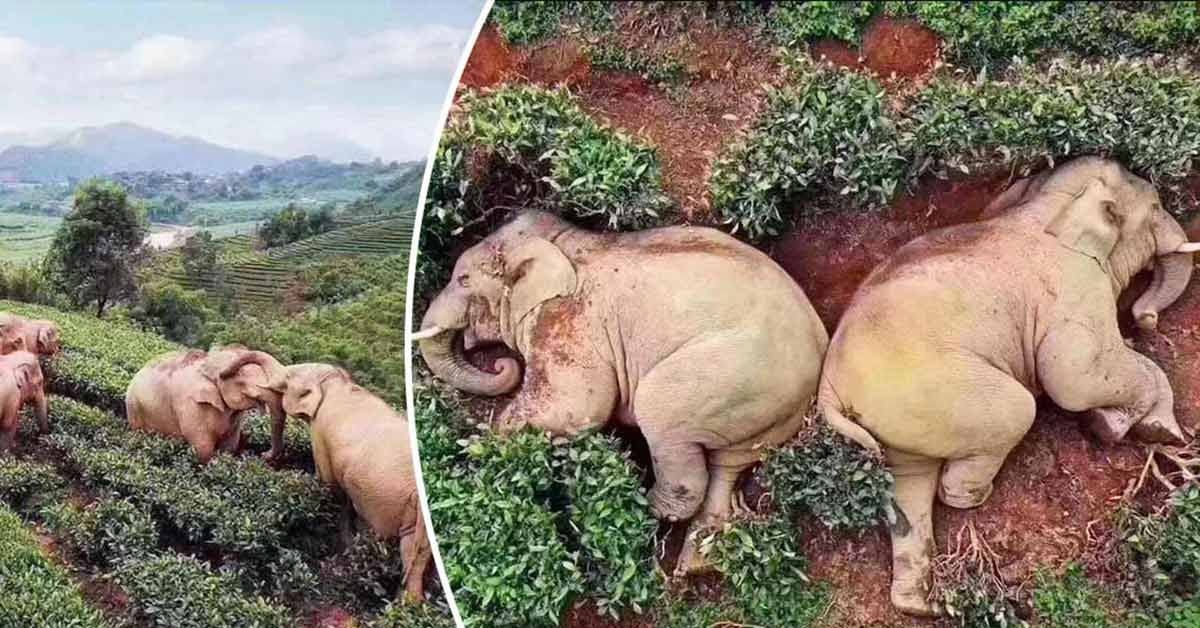 The coronavirus outbreak has gotten people scared and worried about the end times. However, while many people are practicing social distancing and self-isolation, this group of elephants is having the time of their lives. And their story is sure to bring us a little cheer in these dark times.

What’s an even more incredible sight than a herd of 14 elephants?

A herd of 14 drunk elephants sleeping with actual smiles on their faces, that’s for sure. The gist was originally posted on Facebook and has since gone viral with over 180,000 shares.

According to the story, 14 elephants went in search of food at a village in Yunan province, China, when they came upon “liquid gold.” Well, corn wine to be a little more specific.

The stash the lucky group found was 30kg (66 pounds) of corn wine. Of course, they downed the entire stash, became drunk, and fell asleep in a tea garden.

On Facebook, the story was posted with a nice little summary, “While humans carry out social distancing, a group of 14 elephants broke into a village in the Yunan province, looking for corn and other food. They ended up drinking 30kgs of corn wine and got so drunk that they fell asleep in a nearby tea garden.”

Despite the seriousness of the coronavirus pandemic, people still manage to make light of the situation, at least to put a smile on our faces

Parveen Kaswan, a conservationist and an Indian Forest Service Officer shared the story on Twitter with a little joke. He said the elephants took the alcohol in a bid “to sanitize their trunks” and were simply sleeping off the effects. [1]

Hey! Can you blame them? Even elephants need their version of hand sanitizer… even if they have to drink it.

The merry band of thieves had been previously sighted

According to Long Yunhai, Deputy Director of the Menghai Forestry and Grassland Administration, there had been reports of 14 Asian elephants entering villages and “damaging vats of grain alcohol.”

Also, they had previously reported that the same herd entered their village on separate days in March and even went to people’s homes. According to reports by the villagers, the herd had destroyed corn storage vessels, solar panels, windows, and doors, in addition to the grain alcohol. Luckily, no one was harmed.

If you had a confused look on your face when you got to the part of the story where the elephants drank corn wine, then you are most likely not the only one. Most people have never even heard of corn wine, talk less of tasting it.

This ‘wine’ is made from — you guessed it — corn in a distillation process. Jereme Zimmerman of Real World Survivor recalls corn wine as being one of the best homemade wines he’s ever made.

“The process for making country wine is simple,” he said. Then he goes on to explain the technique for making corn wine. So, if you’re willing to be open-minded about what wine can and can’t be, then, perhaps you should check out the recipe here and see how it goes. [2]

How much alcohol will it take to get an elephant drunk?

Most people, especially those who cannot hold their liquor start to get tipsy after just a glass of alcohol. However, you can’t compare a human being and the largest land animal on earth.

A study published in the journal Physiological and Biochemical Zoology entitled “Myth, marula, and elephant: An assessment of voluntary ethanol intoxication of the African elephant (Loxodonta africana) following feeding on the fruit of the Marula tree (Sclerocarya birrea)” answered the question.

The authors carried out the study to get the truth of whether or not elephants get drunk off the marula fruit as is claimed by folklore. After thorough research and calculations of the elephant’s body weight, digestion rates, and more, they concluded that it will take about a half-gallon (1.9 liters) of ethanol to make an elephant tipsy. [3] That said, 30kg of corn wine could probably do the job.

The decline of the Asian elephant population

The herd in the news came close to the village in search of food. Also, the surviving population of the elephants is about 50,000. This is as opposed to the over a hundred thousand that were around a few years back.

This decline in population is primarily due to the loss of their habitat. The increase in human population and their actions has reduced the habitat of these elephants drastically. [4] This rise in population has led to greater development projects, agricultural plantations, as well as an increase in their settlements.

All these have led to a reduced availability of food for these animals which means they go into human settlements in search of food. Unfortunately, this has led to increased human-wildlife conflict. Also, poaching of Asian elephants, while not as rampant as that in Africa is still a problem. The reduced habitat also makes it easier for poachers to find them. [5]

Regardless of the unintended benefits of the coronavirus lockdown, such as a noticeable drop in pollution, the habitat of these animals is still threatened. Government policies, as well as efforts on the part of people to protect them, will be beneficial in the long run.

Hopefully, more can be done to salvage the situation of the great Asian elephants.