A Stunning Cathedral in Italy Is Made Of Living, Breathing Trees 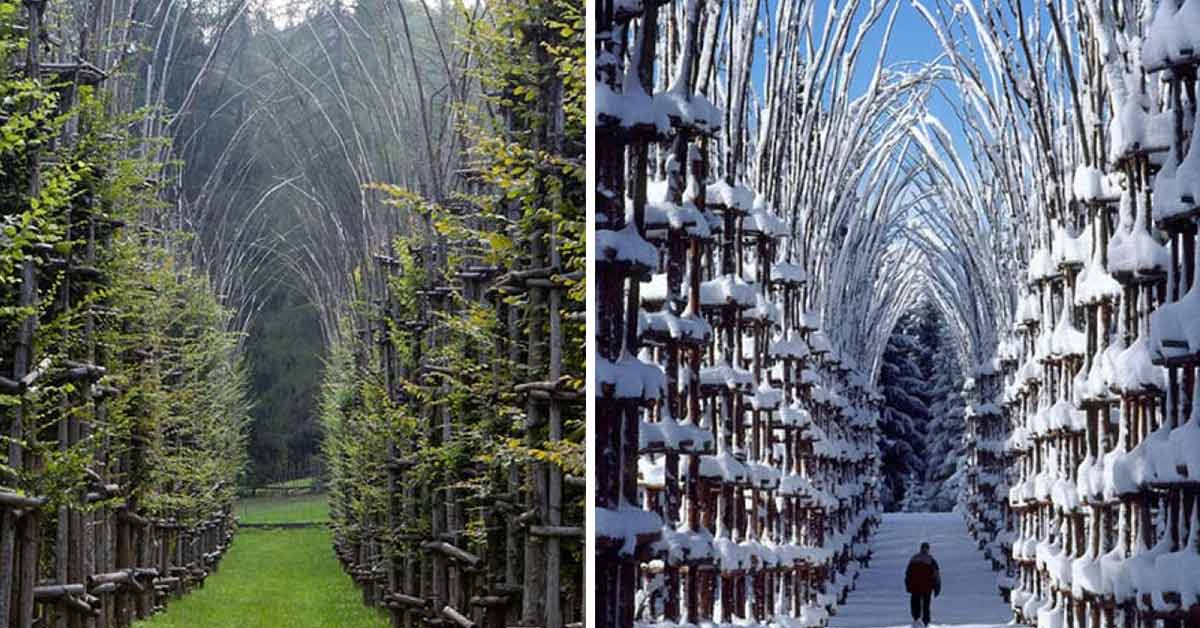 A building where people come to feel the very essence of spirituality shouldn’t be made of stone-dead concrete. Trees have been regarded as the historical inspiration of cathedrals. In nature, they represent strength, beauty, immortality, a source of life, protection to others, and home to several species. These traits are exactly what a cathedral should be to the people whose denomination of Christian worship it congregates.

European churches are known for their magnificent structures and historical feels, with high wide naves, arched windows, stained-glass windows, and lower aisles. However, one of the most beautiful edifices of worship in Europe doesn’t have any of these and it’s still stunning. The Cattedrale Vegetale or Tree Cathedral, designed by Guiliano Mauri is located at the foot of Mount Arera in the Province of Bergamo, Northern Italy. This lovely Church is a large, real-size cathedral, made of 42 columns of young Beech trees forming five aisles in total. [1]

The cathedral was created by the late Giuliano Mauri (1938–2009), an iconic Italian artist and architect known for his expertise in natural art and architecture. He specialized in using branches and twigs to create astonishing and ageless structures all over the world.

The basilica was perhaps Mauri’s most famous and most celebrated work. The current appearance of the cathedral is not the intended look, as it’s only a framework to support the growth of 80 hornbeam trees. Nonetheless, it still looks amazing.

Mauri knew that the hornbeam trees would not turn out as he wanted if left unguided, so he created dozens of frame-works using 1,800 spruce trunks and 600 chestnut tree branches secured with 6,000 meters of hazelnut twigs to guide the growth of the hornbeams. He then planted two groves of trees including 80 hornbeam saplings at the center of each framework.

When the frameworks die and rot away in years to come, the canopies of the hornbeams will mesh together to form a leafy, gothic cathedral.

Every single part of the tree is done and fastened with natural materials. It’s entirely living, breathing, and giving priceless life.

A wonder to behold

The cathedral’s life-giving effect is complete with a small pond of fresh water on the side that’s surrounded by a barricade of conjoined spruce trunks.

When it came to the location of the cathedral, Mauri was very purposeful when he built it within nature.

“I spoke with Mauri, but he did not consider other places,” said Andrea Ferrari, the city’s councilor for culture. “The cathedral was to be built there, in an area where nature was not contaminated by the city and that would have left intact the evocative power of the work.” [3]

Mauri began the project in 2001 and the framework structure was completed in 2010. Sadly, he wasn’t there to see his near-finished work since he passed away in 2009. In 2002, Mauri completed his first cathedral project using a similar design in Valsugana, Italy, as part of a natural art exhibition.

To everyone’s sorry, the cathedral suffered after violent thunderstorms and rains in November 2018 in North Italy. The structure was heavily damaged, and for a while, it was uncertain whether it would be able to be repaired. As of December 2019, according to the Atlantis Obscura, the cathedral is regretfully being set to be demolished.