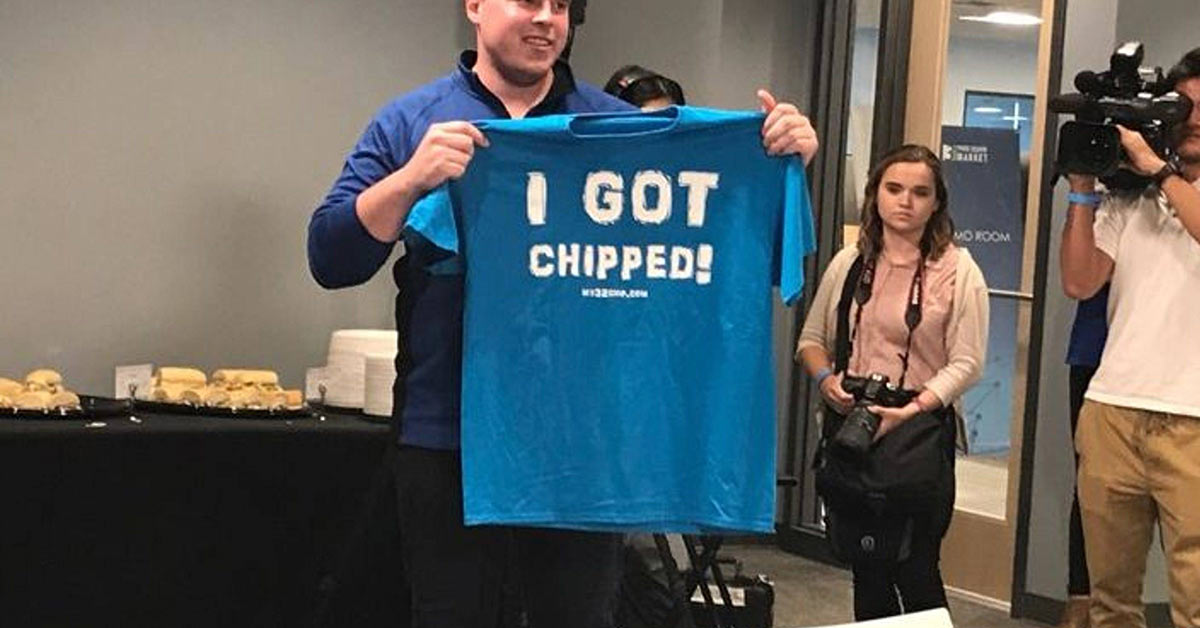 Anyone who has ever watched a sci-fi movie knows that in the distant future the robot overlords will rise up against humanity and cause the end of the world. Fortunately, we are still a long way from developing the technology required for that to happen. Or are we?

This technological development sounds like a conspiracy theorist’s wet dream or something out of a sci-fi movie: a company implanting microchips under their employees’ skin. However, this is not a conspiracy, and rather than running away in fear, their workers are lining up for the opportunity to be implanted with microchips.

Employees at Three Square Market, a technology company in Wisconsin, were given the option to have a chip the size of a grain of rice injected between their thumb and index finger. Although the program was an entirely voluntary one, more than 50 employees at the company’s headquarters in River Falls volunteered to undergo the procedure.

This chip allows them to accomplish any task involving RFID technology — including opening doors, swiping into the office building, and paying for food in the cafeteria — all with a simple wave of the hand.

“It was pretty much 100 percent yes right from the get-go for me,” said Sam Bengtson, a software engineer. “In the next five to 10 years, this is going to be something that isn’t scoffed at so much, or is more normal. So I like to jump on the bandwagon with these kind of things early, just to say that I have it.” [1]

According to a statement put out by the company’s officials, the chips are a convenient way for employees to bypass using company badges and corporate computer log-ins. It also falls in line with the company’s philosophy since Three Square Market makes cafeteria kiosks aimed at replacing vending machines in hospitals, hotels, and company break rooms.

Now, employees with embedded chips can have their hands scanned by a reader, similar to making payments with their smartphones or credit cards. Company officials say that the chip is a passive device and does not have a GPS tracker in it.

Heralding the future of Big Brother

Patrick McMullan, president of Three Square Market, says that the idea for the chips came to him in 2017 when he was on a business trip to Sweden. Many people in the country are voluntarily opting for subcutaneous microchips to allow them to do things like book train tickets, enter secure buildings, and monitor their health. [2]

Although microchip implants have been around for quite a while, Sweden is one of the few places where the process has taken off successfully. The embedded microchip functions as a kind of electronic handbag that replaces one’s need for keys, credit cards, train tickets, and even gym cards.

The chips used at Three Square Market come from Biohax International, which claims that it currently has more than 3,000 people using its chips in Europe. Company founder, Jowan Osterlund, has secured deals with several companies across the globe to have the chips installed into their employees. [3]

Biohax claims that their chips are passive like many RFID chips — they don’t include any batteries, but instead get their power from RFID readers when they scan the microchip. For instance, McMullan’s chip only contains his unique identifying information that grants him access to the building, his office, and computer, as well as some necessary medical information.

That is not for me, please

However, not everyone is so excited to have chips stuck in them. Software engineer Jon Krusell and sales director Melissa Timmins were both hesitant about the procedure. Krusell said he was excited about the technology but wary about implanting a device under his skin. He says he might get a ring with a chip instead.

“Because it’s new, I don’t know enough about it yet,” Ms. Timmins said. “I’m a little nervous about implanting something into my body. Still, I think it’s pretty exciting to be part of something new like this. I know down the road it’s going to be the next big thing, and we’re on the cutting edge of it.”

As you would expect, the issue of implanting employees with chips has raised some questions, both privacy- and health-related. Nick Anderson, an associate professor of public health sciences at the University of California, claims that the chips can also be used to track an employee’s whereabouts. [4]

Alessandro Acquisti, a professor of information technology and public policy at Carnegie Mellon University’s Heinz College, says that the security of the chip may be at risk. “Companies often claim that these chips are secure and encrypted, but encrypted is a pretty vague term which could include anything from a truly secure product to something that is easily hackable.”

So, what do you think? Would you be willing to give up privacy for convenience in this modern world?