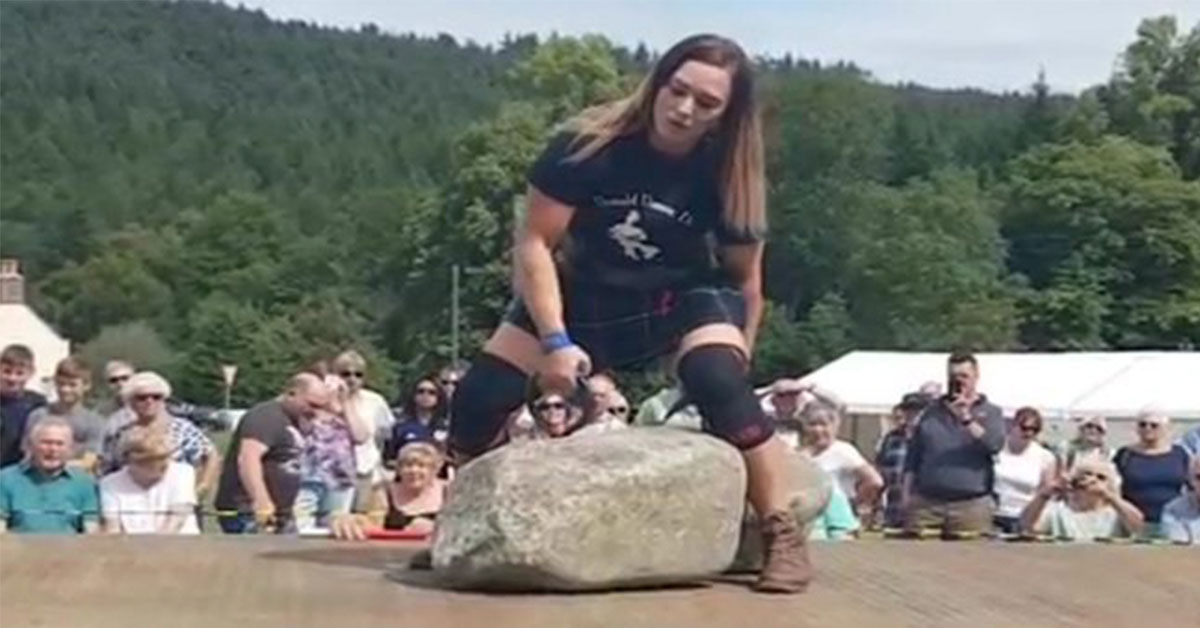 Records are set to be broken, and it is the dream of many sportsmen and sportswomen in the world to break records set by legends in their fields, from Usain Bolt breaking and setting new land speed records, to a strongwoman lifting a combined weight of 733 pounds.

Leigh Holland-Keen is arguably one of the strongest women in the world, but the 29-year-old registered nurse from Townsville prefers to describe herself as a ‘strongwoman competitor.’ And that she is, as she set new records in 2018 for being the first woman to lift the “Dinnie Stones” in almost 40 years.

The Dinnie Stones are a pair of Scottish solid granite lifting stones that have a combined weight of 332.49 kilograms (the larger stone weighs 188.02 kilograms while the smaller stone weighs 144.47 kilograms.) They are also referred to as Stanes or Dinnie Steens and can be found in Potarch, Aberdeenshire.

The stones came into the limelight in 1860 after they were lifted and carried barehanded across the width of the Potarch Bridge by popular strongman, Donald Dinnie. This was a distance of 17 feet and 1.5 inches, which is a feat considering that the current record for holding the stones up by one person is 41 seconds. [1]

Since then, the stones have been a big part of strongman and strongwoman competitions and have even been featured on the History Channel show, The Strongest Man in History. They remain in use as lifting stones and have spawned a local tradition from the 1950s. To date, only 106 individuals (102 men and 4 women) have successfully managed to raise both stones for any period of time.

Breaking the Stereotypes in Strength-Based Competitions

Since the stones were lifted in 1979 by Jan Todd, who was the first strong woman to do so with straps, they have been a mostly male affair. That is, up until 2018 when Leigh Holland-Keen achieved the same feat of lifting both stones for a few seconds while assisted by straps.

This feat made many consider Holland-Keen to be one of the strongest women in the world, and she received several sponsorship deals on her return home. More importantly, she set off a spark to women lining up to conquer stereotypes. [2]

So far, her record has been broken twice. First, by Emmajane Smith, a strongwoman who lifted the stones without straps on January 19, 2019, making her the first woman to do so. And most recently, Annika Eilmann, another strongwoman from Finland, became the first woman to successfully lift both stones for over ten seconds without any assistance.

When asked what a strongwoman competitor is, Holland-Keen says, “Most people are familiar with ‘world’s strongest man’ competitions where they pull trucks and heavy tires. Well, it’s exactly that, except, it’s women.” [3]

Holland-Keen, who juggles her full-time nursing career with attending international strongwomen competitions had to face a fair share of stereotyping comments on social media. Some troll claimed that she was only able to achieve the feat by using performance-enhancing drugs.

“The amount of media coverage that has come from this has been overwhelming,” said Holland-Keen on the matter. “I don’t take drugs; females are quite naturally strong, you don’t need performance-enhancing drugs.”

Holland-Keen maintains that she worked hard for her success as she has trained for at least two-and-a-half hours in three training sessions a week. However, she had to adopt a different approach while training to lift two giant boulders.

“I’d been consistently in training for strongwomen competitions since 2010, but six months before the Dinnie Stones challenge I started on deadlift holds, to train my grip. Luckily enough, there is a person in Townsville who has replica pin handles in stones; I was able to borrow the boulders and train in my garage.”

Asides from her newfound fame after lifting the Dinnie Stones, Holland-Keen has also become a role model for young women who aspire to break barriers as she has.

“I have a younger sister as well, and in today’s fake Instagram culture, I want to be an advocate for women. You can be strong, and that’s okay. It’s good for your mind also. When you put in the hard work and you reach that goal, it’s a good feeling.”

The international strongwoman industry, which involves women performing feats of strength, is open to women of all ages who are willing to take up strength training. Strongwomen can compete in events such as the annual World’s Strongest Woman (WSW) competitions among others. [4]

Most international strongwoman competitions are sanctioned by the International Federation of Strength Athletes (IFSA) and televised nationally on ESPN.