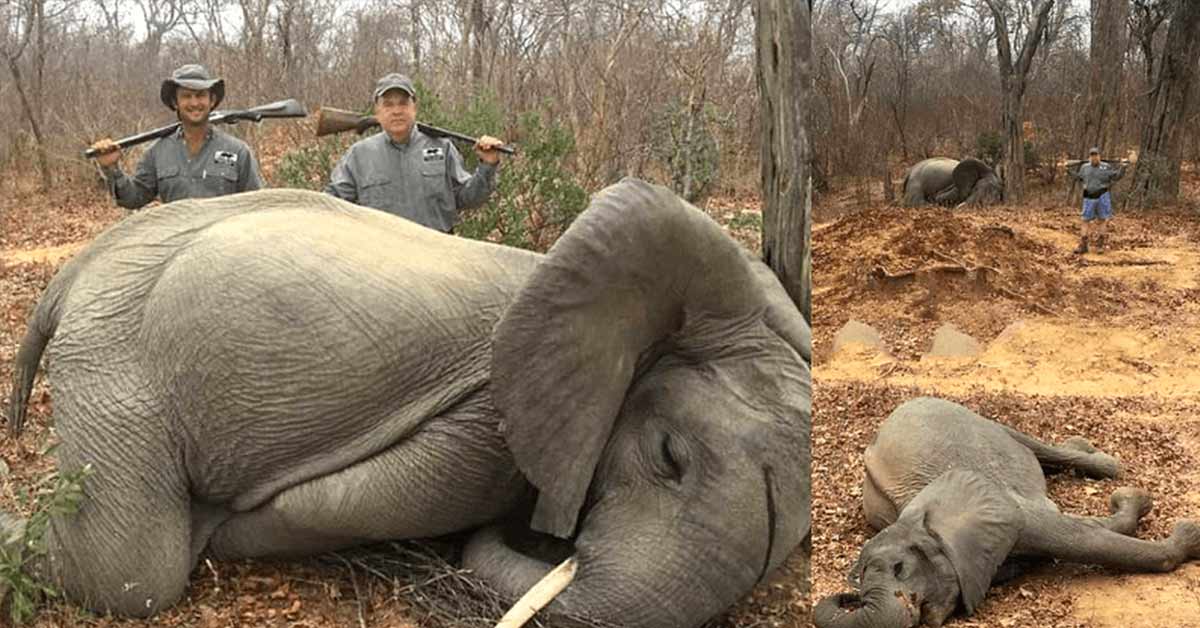 A tremendously upsetting photo that evokes a visceral reaction from anyone who comes across it has gone viral over the past couple of weeks. The photo shows 60-year-old Mike Jines — U.S. energy executive and partner of TopGen Energy from Alpharetta, Georgia, and his partner, professional hunter Max Delezenne, posing with the lifeless bodies of the two baby elephants they killed in Zimbabwe. This was during a hunting trip in October 2018.

The gruesome photo depicts the dead bodies of the elephants as well as gunshot wounds in their foreheads with blood flowing. The two men are smiling with pride whilst carrying their rifles on their shoulders. [1]

Facebook user Darrell Eisman first uploaded the photos with the caption, “Apologies for the disturbing photo. If you’re really upset by what you see, then make this go viral along with an email letting Mike Jines know what you think [sic].“

The post went viral and was shared by almost 100,000 people who made sure that Mike knew what they thought of his actions, which were mostly along the lines of “despicable and heartless.”

Mike gave an in-depth recount of the incident on a hunting forum where he wrote, “The hunt started with a bang… literally. Less than 30 minutes into the first day, we experienced a double-elephant charge. We positioned ourselves to get a good lock at the tuskless and concluded that since it was just Day 1 we would pass. An instant later she came in an all-out charge. Buzz and I both fired two shots apiece and she went down.“

“Then from behind us, a large one-tusked cow charged at full speed. We each fire one shot and she crashed to the ground with her hind legs out behind her, indicating the speed and determination of her charge. The two cows were less than forty feet apart with Buzz and I in the middle. Fortunately, we had positioned ourselves in some open ground so we had good visibility when the charges came. Certainly, a little more excitement than we had bargained for on Day 1.” [2]

Talk about a PR Nightmare

Mike believes that he has not only brought retribution upon himself but also on the company he works with. The company’s website was blasted with angry messages and rated “does not recommend” on Facebook. It’s also inconvenient that their customers who type TopGen into Google get results that have something to do with dead elephants. That is certainly not a good look for the company. [3]

People online have taken it upon themselves to drop the full contact information of Mike and the company, including their phone numbers, email addresses,  P.O. box number, and website address of the company. One can only imagine the number of angry messages they’ve received so far.

That single act affected Mike’s business and personal life so much so that he had to make a statement about the issue.

Mike said in an interview that they shot the elephants in self-defense, in a designated safari area and in compliance with the U.S. and Zimbabwe hunting laws. He also went ahead to refute the claims of the elephants being juveniles. He said they were both adults.

In his own words, he said, “The two elephants that are shown in the photos were shot in self-defense, in an unprovoked charge and both elephants were fully mature cows, not juveniles. While I can appreciate that hunting can be polarizing and that views on hunting can vary materially, I am sure that you can appreciate what it is like to deal with the vitriol particularly when the underlying information, in this case, is inaccurate.”

Unfortunately for Mike, that didn’t seem to go down well with people as they still seemed to want his head on a stake. Not to mention, the internet never forgets. They dug up Mike’s hunting profile which reads, “Mike has hunted extensively across Africa and has shot multiple species of each of the Big Seven with the exception of rhino. His hunting passion is hunting elephant on a classic tracking hunt with a double rifle.” This seems to contradict his statement.

Then again, the other side of the story can only be told by two dead elephants.

A few decades back, as many as 10 million wild elephants could be found in Africa. However, years of poaching has significantly reduced that number to just a little over 400,000. If care is not taken, the largest land animals on Earth could become extinct. [4]

Future generations might not even get to see these majestic creatures. How sad is that thought?

The key threats steering the species dangerously close to extinction are poaching for ivory, human-elephant conflicts, and habitat loss. Also, trophy hunters — who seem to have chosen the aesthetics of having rare and magnificent body parts of these creatures over the ethics of preserving wildlife — are certainly not helping matters in any way.

If we don’t want this to turn into a regular occurrence that will eventually lead to the extinction of these animals, then we all need to ‘join tusks’ and fight against poaching and especially trophy hunting.