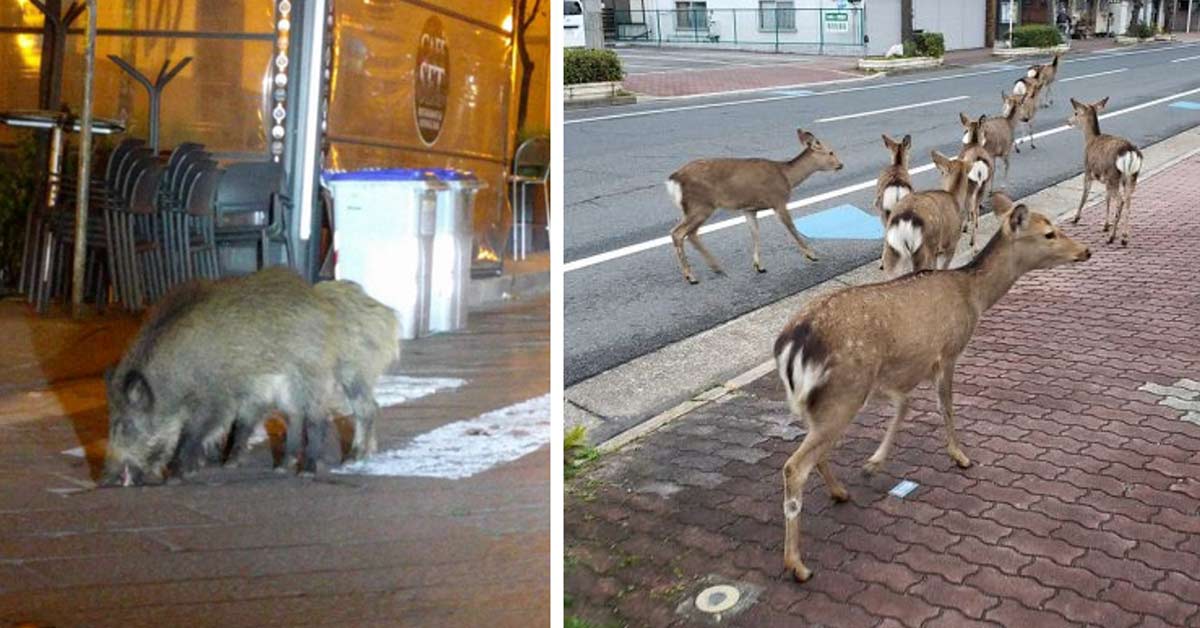 As the novel coronavirus continues to spread, a number of countries have placed strict measures in order to mitigate the spread of the virus. Public gatherings and travel have been banned, and the simplest of interactions are being discouraged. Many cities in the world are strictly observing this strategy, with the knowledge that the life of their citizens hinges on the compliance levels. [1]

Global economies have also been on a steady decline, with several countries deliberating whether or not to go into full lockdown mode to stop the spread of the virus.

For animals who do not understand the severity of the current situation, this is an opportunity for them to experience total freedom and explore without the presence of humans. In countries such as Japan, Thailand, and Italy, animals have been observed roaming the streets.

People in Japan have been reportedly seeing deers on the streets. While deers are not an uncommon sight, owing to the presence of Nara Park of which they are local, it was surprising for citizens to wake up one morning and find their streets taken over by these animals. The reason for this is not far-fetched. Tourists usually buy crackers to feed the deers. An absence of tourists means that they have nothing to eat, leaving them with no option to take to the streets to find something to munch on. [2]

Several videos and pictures have surfaced online, with many residents expressing awe or shock at some of the images.

In Thailand, animals, specifically, monkeys, are taking this newfound freedom of theirs to a different level, viciously fighting over food scarcity. Residents who were left shell-shocked said that they have never seen a fight of that magnitude in Lopburi.

Speaking to Thai Examiner 65-year-old Byo Um-in said: “I haven’t seen a fight like this for many years that I can’t remember. Normally, the fights involve five to ten monkeys.” [3]

The reason for this vicious war isn’t far fetched. The effects of COVID-19 have seen tourist activities come to an abrupt halt. Since tourists are fond of feeding the temple monkeys, they have come to rely heavily on their activities for sustenance. The city monkeys, on the other hand, are accomplished thieves that have no difficulty stealing food from grocery stores. This spurred the temple monkeys to brave all dangers and wade into enemy land in search of food.

“It’s the summer, so usually we see a lot of tourists, but now because of the outbreak, there’s so few that the markets are very quiet. Not enough tourists come to leave food for the monkeys at Prang Sam Yod [temple],” said Sasaluk Rattanachai, who posted a video of the brawl online.

The result of this single action was brutal. In the video, which has since gone viral, temple monkeys can be seen invading the territory of the city monkey. Thirty seconds later, all hell was let loose as both city and temple monkeys could be seen engaging each other in a brawl that left locals amazed. Unsurprisingly, many of the primates from both ends of the divide sustained injuries that were tended to by the locals. Additionally, they laid out food in both territories to forestall any further fights.

But this is not without the worry of how far these monkeys may go if the situation doesn’t improve. They hope that a cure will be found, and activities will pick up before the monkeys are driven to do something worse, such as breaking into shops or attacking humans in the streets.

In Italy, pictures of wild boars and a horse wandering the streets have also been posted on the internet.[4]

The economic impact of the Covid-19 virus on tourism

For countries who rely heavily on tourism, this period is indeed a devastating one. The recent surge in the number of infected persons has seen Italy impose stringent measures, which include banning any movement within the country and closing off all non-essential businesses. Still, the disease is not letting up, having infected over 74,386 people and claimed over 7,503 lives already, as of March 26. [5]

The Portugal tourism industry, on the other hand, is already feeling the brunt of the virus, with 60% of hotels within the country, especially Southern Algarve reporting cancellations. [6]

What’s worse? Employers are scared that the worst is yet to come, and they hope that a reprieve will come soon.