Are these the coolest selfies ever? Gorillas pose for selfies with anti-poaching rangers in DR Congo 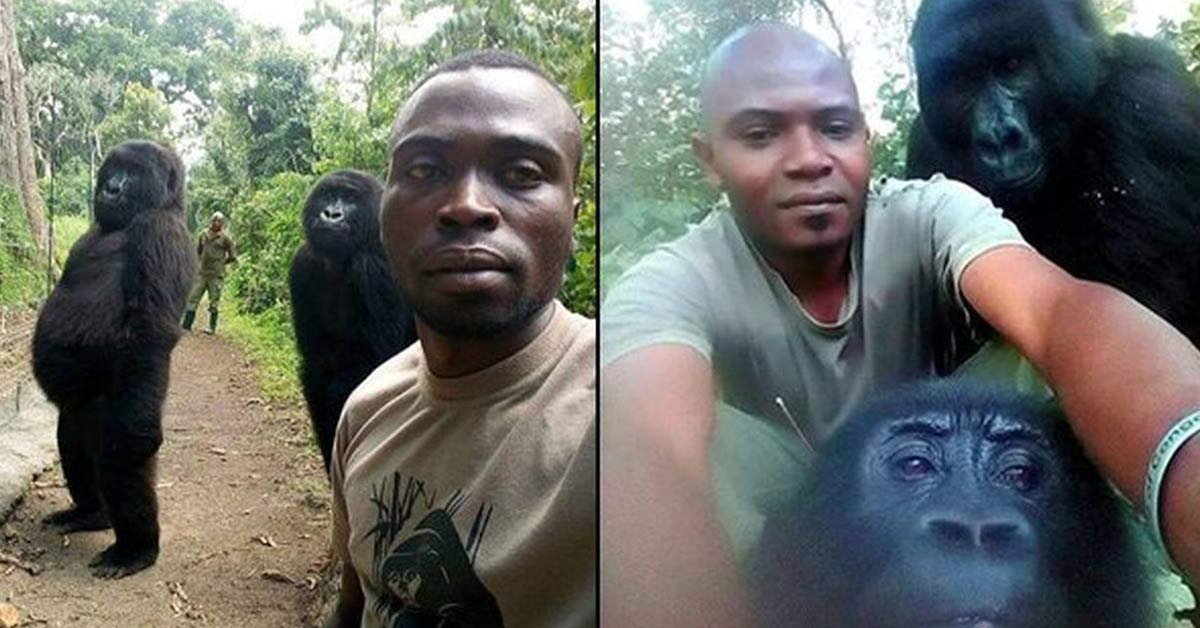 Taking cool selfies should be considered a superpower. A lot goes into taking the perfect selfie. You have to check several boxes like finding your most flattering angle, getting the light right, not to mention your pose. Some people take up to a hundred selfies only to end up deleting all of them. Sigh… Celebrities make it look so easy.

The Virunga National Park in the Democratic Republic of Congo is home to around one-third of the world’s endangered mountain gorillas. These gorillas, however, do not seem to let that damper their moods at all. They take selfies like a couple of professionals at a photo shoot. Our stars are named Matabishi and Ndakasi. These two are super eager to try new things, posing for multiple selfies being one of them. There are three selfies in all.

The first, captioned by ranger Mathieu Shamavu: “Another day at the office” is quite fitting. It shows one of the rangers with the two gorillas flexing their muscles in the background.

The second is a shot of Matabishi and Ndakasi with another one of the rangers, Patrick Sadiki. They captioned this one: “Family portrait.” How cute!

The third depicts a tender scene of a gorilla being carried on the shoulders of a ranger. This particular shot evokes a lot of heartwarming emotions as it is particularly sweet. It is titled: “Words to Live By – Sagesse Intemporelle.” The words written in French are translated into English thus: “When one is still young, it seems very simple to be a hero or a martyr. But as one marches on in life, one understands the price of a simple act of virtue, and only God can give us the strength to achieve this.” [1]

How do you get gorillas to pose for pictures?

Everyone knows how difficult it is to get the kids to stay put for just a few seconds to take a photo. And these are kids who can stand upright and understand instructions fully. Now, imagine how difficult it would be for animals who are only comfortable walking upright (bipedalism) for only short periods.

Deputy Director of the Park, Innocent Mburanumwe, explained why the gorillas were comfortable enough with the rangers to take those photos. Both their mothers were killed in July 2007 and they were moved to safety in the Senkwekwe center, located at the park’s headquarters in Rumangabo. He said the gorillas have taken the park rangers as their parents.

“They are imitating the humans,” said Mburanumwe. [2]

When the pictures surfaced online, the park, in the caption, noted that “the gorillas are always acting cheeky so this was the perfect shot of their personalities.” And they were right. Already the pictures have been shared more than 20,000 times. Online users are delighted and have described the photos as being “the best selfies ever” as well as using adjectives such as “magnificent.” [3]

Former BBC journalist now working for the UN in Kenya, Yvonne Ndege, referred to one of the photos as “Selfie of the year, no question!” [4] Even the park’s director, Mburanumwe had his thoughts about the photos: “I was very surprised to see it… so it’s very funny. It’s very curious to see how a gorilla can imitate a human and stand up.”

Who did it better?

As we all know, selfies are huge in today’s social media age. Everyone wants to take the perfect selfie. Celebrity Kim Kardashian-West even has a selfie book titled Selfish. The book costs $19.95 and over 32,000 copies were sold. That’s pretty impressive. But did she have gorillas casually chilling in the background for candid shots? No, she did not. But, maybe we should give her a break; after all, in the book’s 445 pages, there was one selfie of her with an elephant. Not as dope as the ranger’s shots were but it was okay. [5]

This park is a UNESCO World Heritage Site located in the lush forests of DR Congo. Over the past few years, the military unrest in the area has made it so that the park is dangerously close to becoming open for damage from the war and poachers. Despite all the difficulties facing them, there are more than 600 rangers — male and female — who have joined hands to try to save this park and preserve the wildlife that lives there. The anti-poaching team members “risk their lives on a daily basis to safeguard the park’s exceptional wildlife,” according to the park’s website. [6]

While the photos are stunning, it is, however, important to note that they were taken under “exceptional circumstances,” and that “it is never permitted to approach a gorilla in the wild.” These were said by the park, probably because they envisaged people trying to recreate those photos in a bid to trend online.

When the photos hit the net, park officials have called on people to “make a difference” and donate to Virunga’s Conservation’s efforts. And that is our duty. We have to help these rangers keep these animals safe. Who knows what cool thing they’ll do next? Let’s keep them safe and we’ll find out.