Are You Ready for the Solar and Lunar Eclipses coming up this June? 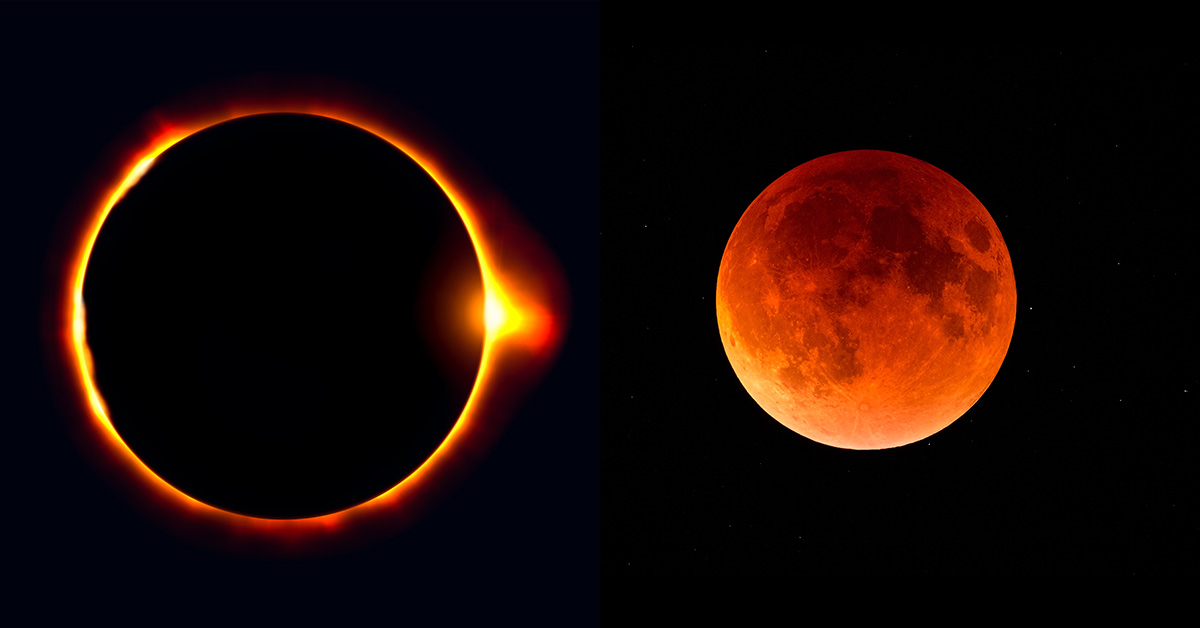 Skywatchers have been totally spoiled this year, and we are nowhere near finished! There are still several celestial events to be enjoyed this 2020 and finally, June is almost here with the double eclipse tourney. April’s ending saw the last of the planet trifecta where Jupiter, Saturn, and Mars lined up behind the moon in their planetary orbits to grace the night sky. The four supermoons of 2020 have all made their appearances, ending with May’s Flower Moon. Now, we are set two for more exciting astronomical events coming up in June: a solar and lunar eclipse. [1]

What differentiates a solar eclipse from a lunar eclipse?

The alignment of the moon, sun, and the Earth determines which eclipse will occur. When the moon rotates around the Earth and moves in the same place as the sun, the light of the sun obstructs the moon and casts a shadow on the earth, causing a solar eclipse. [2]

A lunar eclipse, on the other hand, occurs when there is an alignment of the Earth between the sun and the moon, blocking the light that reflects from the sun and casting a shadow on the moon. During a lunar eclipse, Earth’s shadow ensures the moon turns from a full moon to a completely black one. Other times, the moon also takes on a reddish color owing to the absorbance of all the colors by Earth’s atmosphere.

When the outer shadow of the Earth falls into the moon, the Penumbral Lunar Eclipse occurs, causing the Earth’s shadow to be visible on the moon.

Whether or not, you can view this will hinge on the weather conditions on that day and your level of observance. The eclipse will commence on the 5th of June at UTC 17:45:51 and will be visible from Australia, South America’s southwest, Antarctica, Europe, Asia, and Africa. It will peak at UTC 19:24:55  and end at UTC 19:24:55.

While the penumbral lunar eclipse may not be visible, the annular solar eclipse will be apparent. This is because the moon is close enough to be aligned between the Earth and the sun without completely blocking the sun. If you will be viewing, expect to see the entire disk of the moon, also known as the ‘ring of fire’ in front of the sun and a bright ring of sunlight surrounding the moon.

For more information on specific time and dates in your city, click here.

This is an important precaution for EVERYONE, so we’ve all got to take note of the dates and times. Remember to also get special-purpose solar filters or eclipse glasses. This way, you can view the eclipse without causing any damage to your eyes. It is important that you avoid substituting eclipse glasses for dark sun shades or watching directly without any filters. No matter how dark your sunglasses are, they can never be replaced by solar filters.