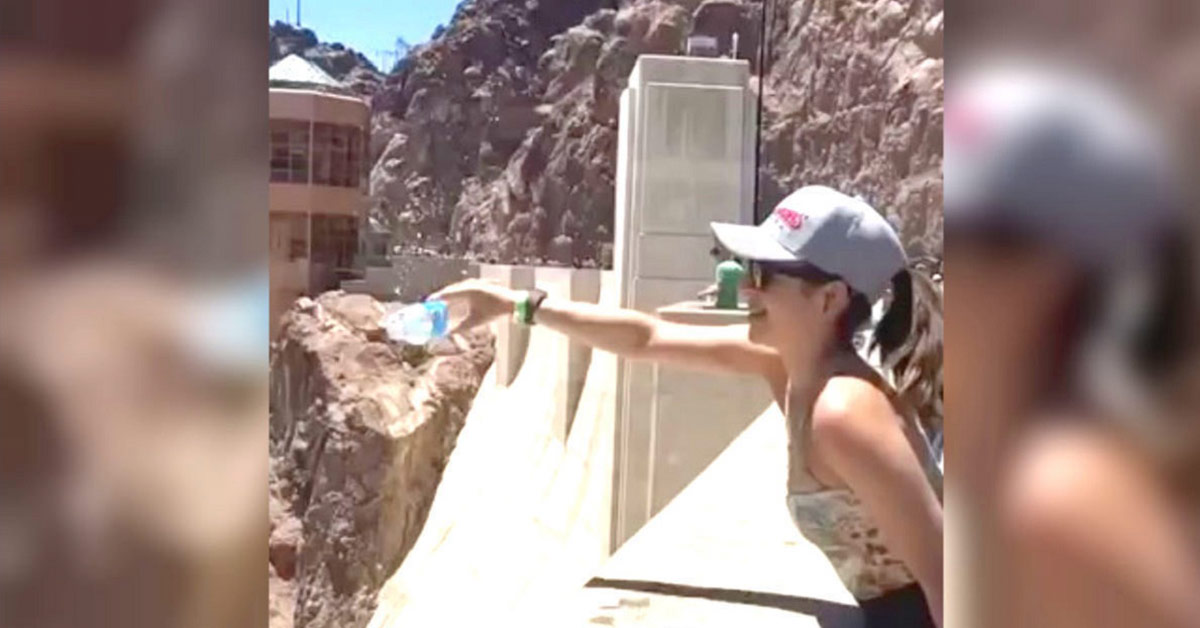 Trust me, this video is not reversed or doctored in any way. It’s just the insane gravity-defying upward drafts working over the curving surface of a water dam.

Dams are one of the greatest inventions of humanity. These structures allow humans to take advantage of the creative power of nature by controlling the flow of water to generate electricity. [1]

The 221-meter high Hoover Dam is a concrete arch-gravity dam located in the Black Canyon of the Colorado River, on the border between Nevada and Arizona. According to the U.S. Bureau of Reclamation, the Hoover Dam generates about 4 billion kilowatt-hours of hydroelectric power annually for use in Nevada, Arizona, and California – enough to serve about 1.3 million people. [2] It’s also a popular sightseeing spot that’s free for everyone, although you’d have to pay for parking and optional tours.

The dam is a magnificent embodiment of several laws of physics and engineering, and they are way cooler in real life than they appear in the textbooks.

A lady named Leslie Hutchings posted an insane video of gravity being put in the pocket at the Hoover Dam. [3] Leslie stood on top of the dam and poured water downward, and what followed next was mind-blowing. It’s such a thrilling sight to watch the water flow out of the bottle and straight up in the opposite direction.

The dam’s management has been accused of doctoring these videos to boost tourism to the site, and some others actually said it’s voodoo. Well, it does appear pretty magical, but it’s just the structure of the dam playing hilarious tricks on your mind.

Thousands of people visit the dam with the sole mission to ‘see things for themselves.’ It’s worth every trip to pour water into an open space and watch it slap right back on your clothes and up into the air. People online attributed it to the slow trickle from Leslie’s bottle. Perhaps, the low pressure of the water aided the upward float against light wind.

Well, even if you dump a large amount of water out of a wide-mouthed hat, as some people illustrated, it will incur the same effect and you’re going to get sweetly wet.

So, what’s the science behind it?

It’s pretty simple if you can visualize the process. The structure of the dam creates an upward draft that made the water defy gravity. It followed the curve of the dam and got carried upward by wind and air. Lots of people who have poured stuff over the dam said they don’t actually feel the force of the draft, which is what makes it so eerily fascinating.

According to Leslie: “It’s an upward draft from the dam — can’t feel [the wind] otherwise! You have to see it to believe it! We didn’t know just how powerful it was until we experimented and poured water over the edge. A must-do on your trip to the American Southwest!”

Seriously, I have to experience this too. Bucket list updated!

Fun facts about the Hoover Dam

As at the time of its completion in 1935 and opening in March 1936, the 221-meter high Hoover Dam was the tallest dam in the world. Now we have the Jinping-I Dam, a 305-meter arch dam in China that was completed in 2014. The dam was built under five years, two years ahead of the proposed schedule, and cost a total of $49 million, which is worth under $750 million today.

At the start of the 20th century, coastal farmers had tried to build canals and waterways to divert the turbulent waves from the raging Colorado river destroying their farmlands. [4] All their efforts were wasted in 1905 when the river broke through all the canals and flooded their land. The task fell to the U.S Bureau of Reclamation, which later came up with a plan to build a dam in the Boulder Canyon on the Arizona-Colorado border.

The dam would not only prevent flooding and control the raging river, but it would also serve as a source of hydroelectricity to be generated and sold for internal revenue. The project was later authorized in December 1928 by the outgoing President Calvin Coolidge and the construction location was changed to the Black Canyon. However, the project was still being called the Boulder Dam until U.S Secretary of the Interior at the time, Ray Lyman Wilbur announced the project would be named after his boss who had just left office, Secretary of Commerce Herbert Hoover. Hoover had brokered the 1922 Colorado River Compact which led to the division of the water proportionally amongst the seven states in its drainage area.

The dam became a source of massive employment in a time of great economic distress. [5] A total of 21,000 men worked there, with an average of 3,500 daily, and towards the end of the construction, the total daily number peaked to over 5,000. About 5,000 of the workers lived in a makeshift settlement called Boulder City in Nevada, where many settled with their families. The men were paid an hourly wage ranging from 50 cents to $1.25. Contrary to popular myth, no worker was buried alive as concrete was poured to build the dam.

The Hoover Dam is a major point of recognition in America’s history and development, where the dissemination of the river gave rise to the urbanization of cities such as LA and Las Vegas. It became a National Historic Landmark in 1985 and one of America’s Seven Modern Civil Engineering Wonders in 1994.