Bear Attacks Plane and Shreds It to Pieces to Get His Hands on Fresh Bait, Pilot Fixes the Damage with Duct Tape and Flies Home 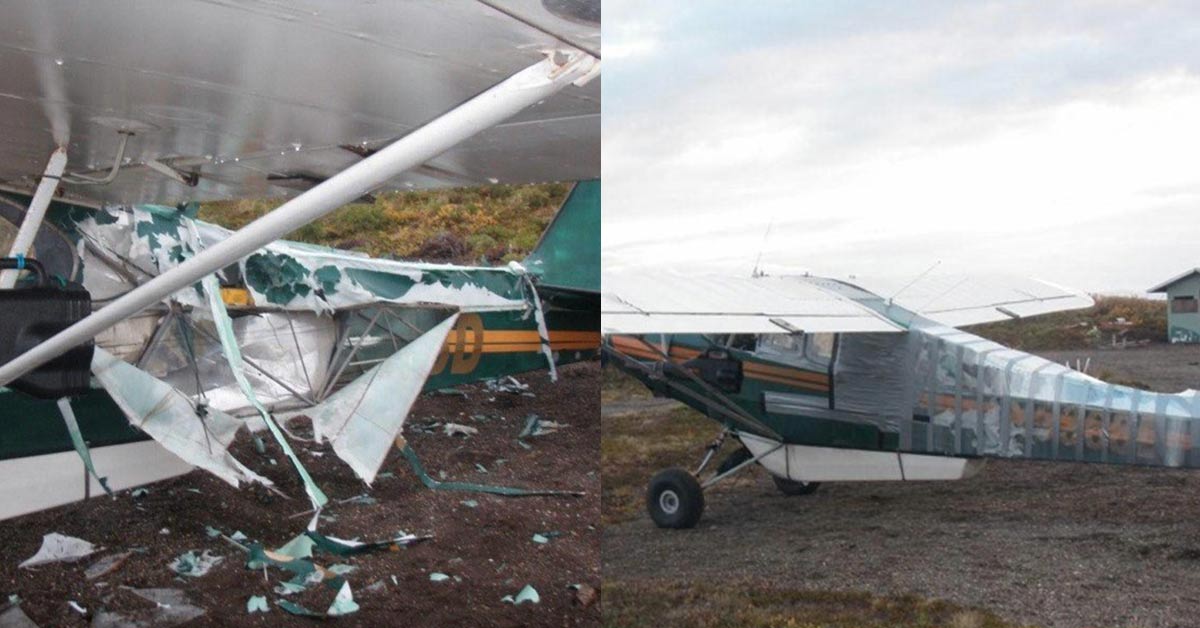 Bears are fond of being in the news for all the wrong reasons and this particular local bear isn’t about to clear the species’s name. This story supposedly happened in 2009 and has been called an “online myth” because there are way too many bear tales out there, most of which are far too colorful to be true. However, credible pictures are proof enough. Anchorage Daily News has reported the pilot’s name, location, and an interview with his father and hunting guide. [1]

One plane and one hungry Alaskan bear

During a quick, overnight at a friend’s lodge, 28-year-old pilot Luke Miller underestimated the freedom of Alaskan bears. These guys can do whatever they want and get away with it. Luke parked his plane at his friend’s place in Southwest Alaska, reportedly making the mistake of leaving fish bait in a cooler on the plane.

One of the hungry, local bears happened to pick up the scent of the well-garnished snack. Bears have an incredibly acute sense of smell. They can detect animal carcasses upwind and about 20 miles away. It makes total sense that this not-so-gentleman could pick up the scent of fresh bait sealed in a cooler and locked in a plane.

The bear decided to go the unsubtle route: tearing the plane apart

The average bear is about four to six times stronger than a human. While hunting, all a bear needs to do is slam its hands down and even the most agile cougar is permanently paralyzed. [2]

In search of his bait lunch, the bear attacked the 1958 Piper Cub plane and ravaged the outer structure, crushing it in many places and eating as much of the cover fabric as he could. [3] He could have just gone for the door, but that’s not important anymore. When the plane was found, it was badly damaged and there was no way anyone could get it up in the air.

Duct tape has been saving lives since 1942

Pilot Miller assessed the massive damage and called in for backup. A true pilot at heart would do whatever he possibly could to take his plane home. He requested for three cases of duct tape, two new tires, and several layers of industrial cellophane. When the materials arrived, he got to work patching up the plane with help from his father, Mark Miller, and his hunting guide Gary LaRose, who had been flying for 38 years.

The creative pilot replaced the tires and used the cellophane to patch up parts of the plane that were bashed in. He held everything tightly together with duct tape, and after a few days of solid work, the plane was airworthy to be flown back to Anchorage.

According to LaRose, despite all the damage he’d done, the bear didn’t find the vacuum-sealed meat in the plane. He probably wandered off somewhere to digest all the fabric he ate and recover from the metal bending exercise.

“He just disappeared into the night. He doesn’t know how famous he is,” said the pilot’s father, Mark Miller.

Moral of the story: do not leave aromatic food in your plane when you’re in bear country, always carry a phone with you to call for help, and never, ever, leave home without duct tape.