Beer stealing bear gets drunk and passes out in the woods 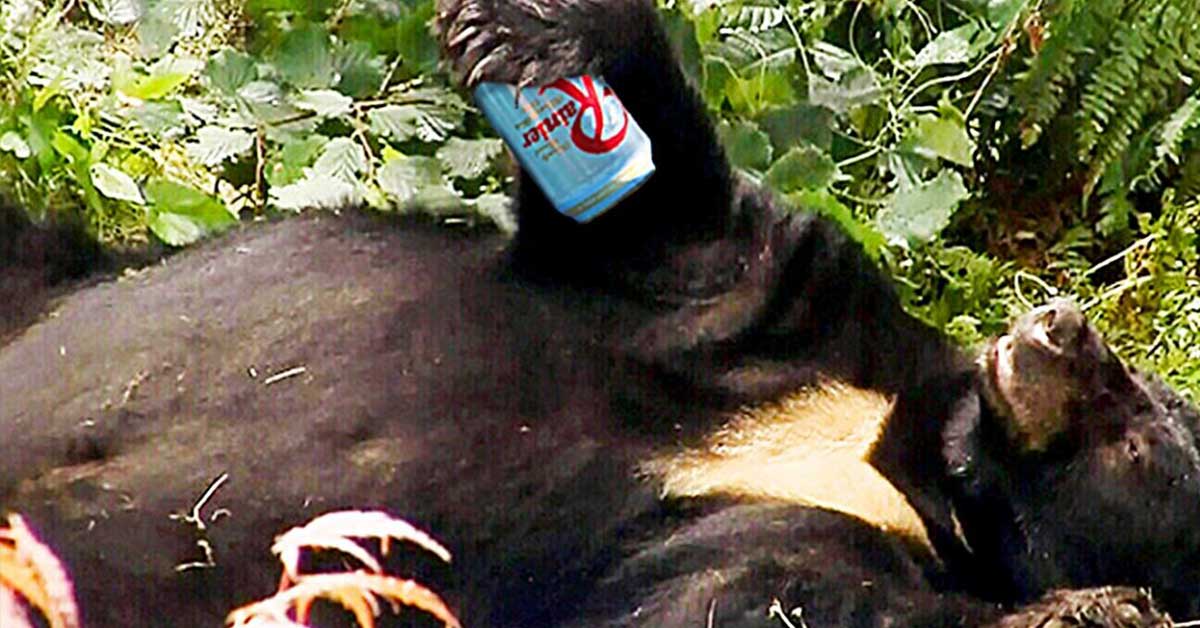 You’ve probably heard that chocolate is bad for dogs, right? Well, have you ever wondered what other “people food’” animals should not eat? In Swift Creek Campground (formerly Baker Lake Resort), we found out exactly what beer does to bears.

Then the Department of Fish and Wildlife found a black bear passed out on the lawn of a campground.

The bear was wandering near the campground when it came across a large stash of Rainier and Busch beers in a cooler. The campers were not around at that moment; they probably went hiking or swimming, or some other ‘campy’ thing they had to do.

Apparently, curiosity kills not only the cat but the bear as well. However, satisfaction brought it back. Despite the obvious difficulties of opening the cans, the bear was not one to shy away from challenges.

He helped himself to a whopping 3-dozen cans of Rainier beer. He had a party all by himself. This one was not so big on sharing.

Funny enough, although there were two types of beer there, the bear drank only the Rainier and rejected the Busch.

And this wasn’t just a coincidence, they did find an empty can of Busch in the mess. It had claw marks on it which implied that he punctured it but preferred the Rainier.

Now that’s a bear that knows exactly what he wants. [2]

Mr. Bear might have been able to hold his liquor in the beginning, but the high number of cans he took was more than a match for him. Eventually, he passed out on the lawn of the campground.

Reminds me of when people pass out on the curb, drunk out of their minds.

Still, no amount of experience could have prepared those wildlife agents for the sight that lay before them: a massive drunk bear. Not something I’d like to stumble across, thank you very much.

One of the agents tried to chase the animal away from the campsite, but he was just too tired and groggy. Nevertheless, the bear managed to climb a tree and sleep off the alcohol for four hours.

Guess it’s a good thing he didn’t have to get to the office that morning. One can only imagine the sort of hangover he must have had.

Eventually, the agents were able to get him away from the campground, but he returned the next morning. Surprise, surprise.

Wildlife officials had to get creative. They needed to come up with a way to capture it for relocation. They settled for a humane trap using doughnuts, honey, and of course two open cans of Rainier as bait. [3]

Guess who fell for it, hook, line, and sinker?

“This is a new one on me. I’ve known them to get into cans, but nothing like this. And it definitely had a preference,” said Bill Heinck, the Fish and Wildlife Enforcement sergeant.

From the way the ‘crime scene’ appeared, the agents figured the bear got into the camper’s coolers and used his sharp teeth and claws to puncture the cans. There was a trail of cans leading back to the campsite. The scene bore enough clues and evidence to get him convicted of the crime of stealing beer.

And of course, the big drunk bear was sleeping in the middle of the chaos.

If I were the owner of Rainier beers, I would have used the situation to my advantage. Imagine a beer commercial that says, “Rainier, the thirsty black bear’s choice of beverage on a hot day.” Unfortunately for Busch, it’ll be one heck of a P.R. nightmare. Especially since everyone was talking about how the bear refused their beer.

Something in the Fish?

Valid question, is there something in fish (a bear’s regular meal) that makes bears want to break into people’s places and steal beer?

A while back, a family of bears broke into the holiday cabin of Even Borthen Nilsen in Norway. They got in through the windows. They drank over a hundred cans of the family’s beer supply.

The bears did not stop there. They ate all the food in the kitchen and smashed up the furniture in the cabin. Talk about a band of merry thieves. [4]