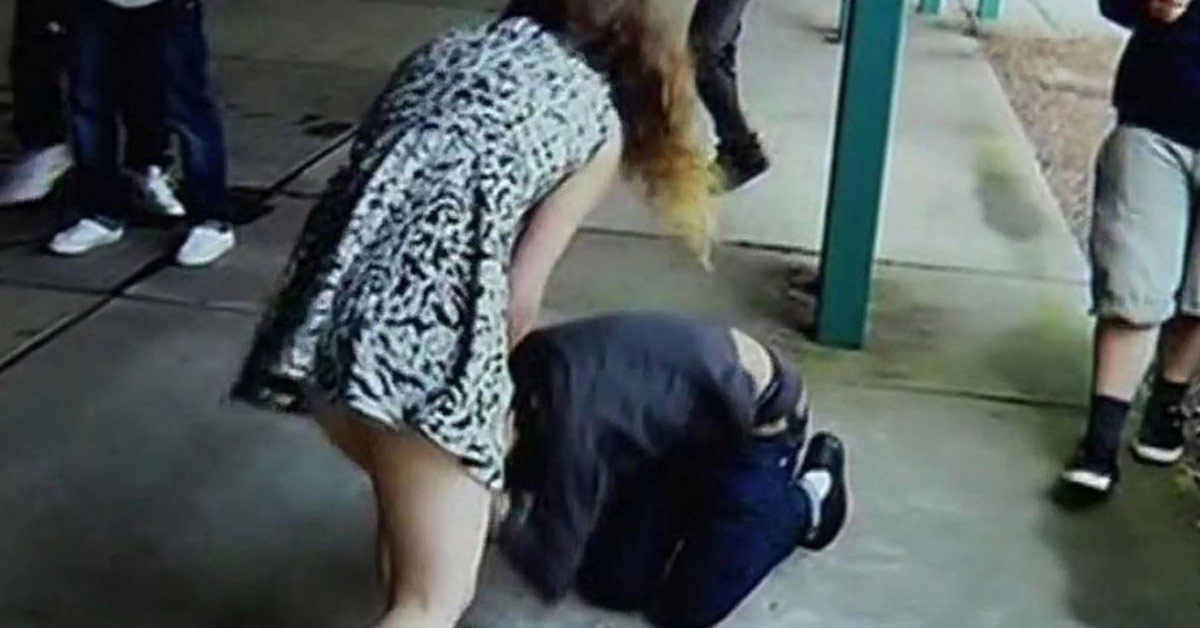 It’s not as much ‘fun’ when the shoe’s on the other foot, is it? This high school boy probably has the best answer to that question — especially after the experience he had. A girl’s use of her combat skills to defend herself against a bully has generated so many conversations and controversies on the topic of cyberbullying and how to deal with it.

That might be the ultimate ‘tease material’ for a school kid. Unfortunately, that’s what this boy is going to have to deal with for a long time. In a viral video of Sonoma Valley High School in Sonoma, California, a female student was seen beating up a boy. The boy who was allegedly cyberbullying the girl must not have expected her to have such an intense skill set.

Using the term “fight” is rather inappropriate; it was more of a beat-up than an actual fight. The girl employed a variation of mixed martial arts methods for striking and grappling, either while standing or on the ground.

First, she tackled him, then wrestled him to the ground. Next, she kneed him in the face several times, after which she body-slammed him. The dazed boy was left lying on the ground looking on, just like every other student who cheered on the girl from the sidelines. After less than a minute of the humiliation, the girl ran off. [1]

The fight elicited different reactions from the public

After the video was posted on Facebook, it went viral with many people commenting to applaud the girl for standing up to her bully. However, not everyone felt that way. They thought she went too far by using her MMA skills. They also believed it was quite dangerous to use the combination of martial arts and combat sports she used that day.

The school administration said, “We never condone violence in any shape or form. People are commenting on Facebook without any knowledge of the incident, and it’s just unfortunate that those are the things we deal with.” Indeed, violence is not the answer, even in cases as upsetting as bullying. [2]

What exactly caused the fight?

The fight, which was captured with a cellphone, was between a 17-year-old girl and a boy who had been cyberbullying her. The girl, who was thought to be a student of Sonoma Valley High, ran off when a teacher tried to catch her. The Sonoma County Sheriff’s department went to the school to file a report; however, it was discovered that the girl is a student of Creekside Alternative High School.

According to the school district, the fight began when a student posted something online which irked the teenage girl.

She is going to be charged

The girl will be charged with one count of battery on school grounds. She will be referred to the Sonoma Valley Youth and Family Services program, but if she refuses to go, she will have to appear before the Sonoma County Juvenile Center.

Parents were assured that the school district takes student safety very seriously. They were notified of that by phone calls and emails in English and Spanish. While the school district won’t be making any changes to the school’s anti-bullying policy, some parents are outraged by the incident. They think the school can do more to address the issues of cyberbullying.

One parent,Vassie Dalakiaris, when asked if she thought the school was doing anything about this fight said, “I think they are, but not to make a big point… they need to do more.” [3]

Cyberbullying story with a happy ending

Cyberbullying can be devastating to the victims. Dannie McMillan, a teen from Texas was cyberbullied by her high school classmate who opened a Twitter account just for making fun of Dannie. She called Dannie a “fat whale.” But rather than letting it get to her, Dannie turned the situation around.

She reached out to plus-size model Laura Lee with an idea to create t-shirts that will help the whale-saving cause. The t-shirts, which read, “Dee the Fat Whale Saves the Whales,” has so far generated $3,380 to help save the whales. What a perfect ending to a story that started grim. [4]

Here’s what you need to know about bullying and cyberbullying

Bullying is repeated behavior of aggressiveness which is either physical, verbal, in-person, or online. Cyberbullying involves the use of digital technology — the internet, emails, texts, or social media — to harass someone else.

Bullies are relentless, their victims might end up living in constant fear of them. Bullying and cyberbullying affects victims by making them feel hurt, angry, scared, and a host of other emotions. The victims are also likely to suffer mental health issues including depression, low self-esteem, and anxiety.

There are ways to prevent cyberbullying

Cyberbullying is notoriously hard to control because it’s a coward’s game. These bullies hide under false usernames and profiles or anonymous accounts to say mean things they could never say in front of anyone. Thus, it is difficult to trace them.

Nevertheless, parents can help prevent cyberbullying by talking to their children often about the topic, and by monitoring their kid’s social media. It’s also very important to take note of your child’s behavior after using social media; if they become withdrawn, anxious, or nervous, you might want to check up on them. [5]

Cyberbullying is difficult but not impossible to deal with. Keep a close eye on your kid and you might help them avoid getting into a fight for vengeance. Notwithstanding, in case of physical bullying, a little self-defense would not be a bad idea — maybe you should let them take karate lessons.