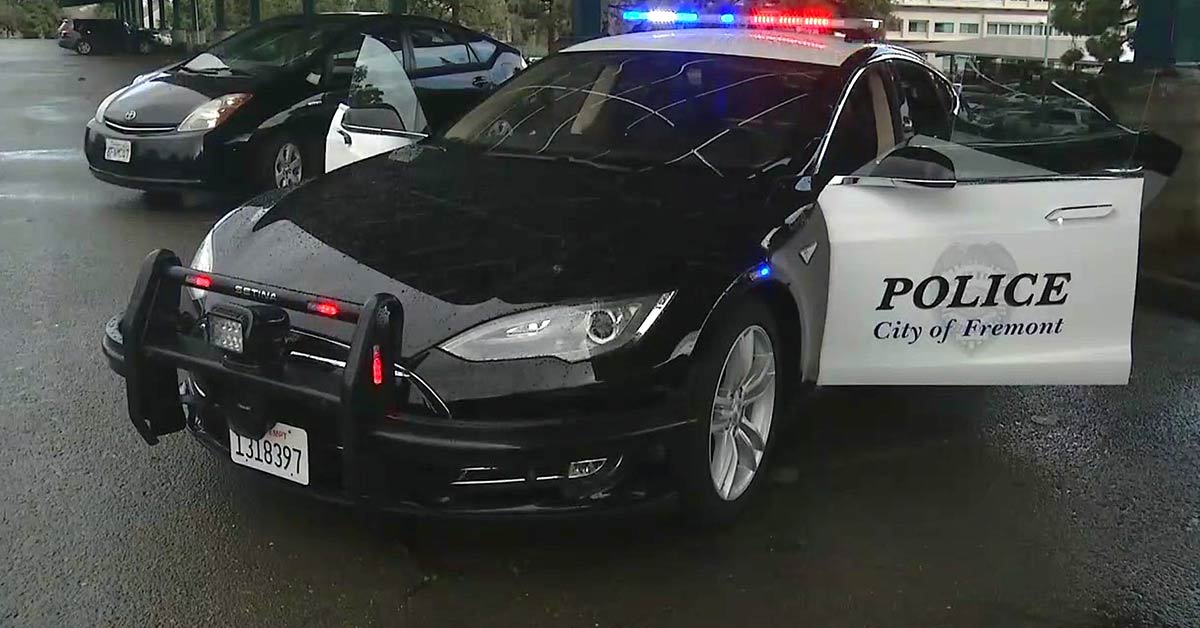 Most people agree that electric cars are the future of motoring. In fact, that could be said in the present as more and more electric vehicles can be seen on our roads today. It’s only a matter of time before they overtake fuel-based cars, but should they?

A Californian police officer driving a Tesla Model S during a high-speed chase on a Bay Area freeway was forced to end a high-speed car chase after the battery of his patrol car ran out on him. He was forced to radio his colleagues for someone else to take over, saying that he was running low on battery.

The dispatch providers blog reports that at about 11:05 p.m. on September 21, the Fremont Police Department patrol vehicle spotted a Toyota Avalon that had a “seizure order” on file from when it was involved in a previous pursuit. An audio recording of the officer’s dispatch was also posted to Broadcastify. [1]

Upon receiving this information, the officer at the scene switched on his siren, but the Avalon fled, causing him to call for backup. Both cars were then engaged in a chase that reached speeds up to 120 mph before the officer signaled that his patrol car could not continue.

According to The East Bay Times, the officer said, “I am down to six miles of battery on the Tesla so that I may lose it here in a sec. If someone else is able, can they maneuver into the number one spot?” [2]

Shortly after the officer had called in the issue, the police sergeant in charge had to call off the chase since the suspect had driven onto the hard shoulder alongside heavy traffic. A few days later, the vehicle was found abandoned in San Jose, and a felony warrant has been issued for the driver.

At least that’s what Fremont Police Department spokeswoman Geneva Bosques said in a statement on the issue. “His battery never died,” the statement read. “There were several additional patrol units behind him.”

Bosques admitted that the Tesla was not fully charged as it should have been. The officer driving had begun his shift by 2 p.m. that Friday, and if the vehicle had been fully charged, it would have lasted well over his 11-hour shift with battery life to spare.

“The Tesla wasn’t fully charged at the beginning of the shift,” a Fremont police officer told reporters. “This, unfortunately, happens from time to time, even in our vehicles that run on gas, if they aren’t refueled at the end of a shift.” [3]

When asked about why this could have happened, spokeswoman Bosques had this to say:

“There could be a variety of reasons why it wasn’t fully charged and I, unfortunately, can’t comment on the exact reason on this particular day,” Bosques said. “It happens from time to time, especially if an officer returns to the station to take a report and then they never go back out in the street.” [1]

Despite the battery issue, Bosques says that this was the second pursuit the electric vehicle had “performed well in” since the first six months of its pilot program. She added that this one unfortunate instance does not, in any way, change the Fremont Police Department feeling regarding the performance of electric vehicles for patrol purposes.

Although there are currently more fuel-powered cars than electric ones, a growing number of environmental activists, business analysts, and auto executives are predicting a sea change as battery-powered electric vehicles grow in popularity.

According to the NPR, non-gas car models on U.S. roads are likely to nearly triple by 2025, this includes cars using alternative powertrains, such as electric power, fuel cells, and plug-in hybrids. Some experts believe we will experience a complete phasing out of gas-powered vehicles in the next few decades.

Not only is this good for the environment and global warming as a whole, but it could also help reduce the cost of transportation. Felipe Munoz, a global analyst at JATO, predicts electric vehicles will outsell conventional ones by 2030.

“Probably in the mid-2020s time frame, it becomes comparable or cheaper to actually buy and operate an EV than an internal combustion vehicle,” says Sam Abuelsamid, an auto analyst with Navigant. [4]