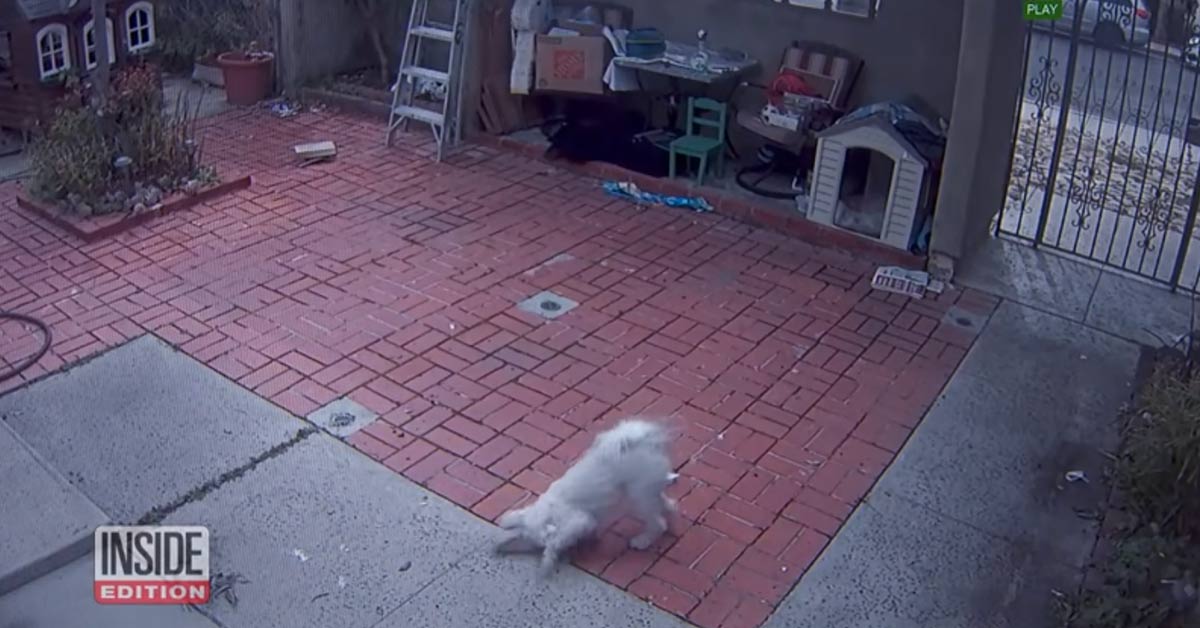 This incident proves how right the expression “to lead a dog’s life” is. The statement, which denotes a person with an unhappy existence, goes to show just how crappy a dog’s existence can be. While for the most part, people in the United States love their dogs and care for them, there are people whose animal cruelty levels are at an all-time high. This mailman from Southern California should be the poster boy for animal cruelty.

The beauty of having home surveillance systems

Alfonso Galindo from Otay Mesa, San Diego, owner of Pupa, a beautiful 7-year-old Poodle-mix, first noticed the strange stains on his patio floor a few months back. The red eyes on Pupa made him understand that the dog was somehow involved in the situation. Unfortunately, Galindo could not quite place a finger on the cause of both issues.

Eventually, Galindo installed CCTV surveillance systems in his house — best idea ever. Of course, the culprit had no clue that cameras were installed. He had gotten away with his callous acts for so long, he figured there would never be any consequences to his actions.

Galindo came home one day and saw the same stains on the floor and the red eyes of his dog. He decided to go through the surveillance footage. First, he saw clips where Pupa was writhing in pain and rubbing her eyes and face on the ground. Galindo went further back until he got to clips from 11:00 am. He then saw a USPS mailman walking towards his mailbox.

Was he just an innocent mailman going about his business? Certainly not. The mailman comes much closer to his gate than is necessary and sprays pepper-spray through the fence in Pupa’s general direction. He then put the mail in the mailbox and went on his jolly way. The video showed the can of pepper-spray in his hand, which he placed under the mail in an attempt to appear less conspicuous. [1]

Such an unfortunate dog

Another camera at a different angle showed Pupa begin to writhe violently. Since she’s a dog, she can’t turn the tap on and run water over her face. There certainly is no calling 911. All she can do is ride out the pain.

“Heartbreak,” said Galindo. “That gut-wrenching feeling. You see the dog withering in pain, and it goes on for a minute and then you’re like, what was that?” [2]

The incident was not a one-time thing

Galindo decided to go back a few months in the CCTV footage. That was when he found out that the incident was recurring. He found nine other similar occasions where the mailman sprayed Pupa. And that was just after the CCTV was installed. One can only imagine how many other times it had happened before.

“It’s a total betrayal of the trust. You would think the postal service is somebody you can trust,” said an angry Galindo. What’s worse is that the dog was not a threat to this man. The mailbox wasn’t even within the compound. It was outside the fence, the house had a locked gate and a ‘BEWARE OF THE DOG’ sign.”

Galindo showed Fox5 the surveillance video with a little commentary. He said, “You can see the mace hanging from his other hand. Right there he is pointing directly at the door not even close to our mailbox.” [3]

Mail carriers are meant to notify their supervisors if they have any concerns about an animal. However, not once has Galindo received a complaint about Pupa.

Aside from the emotional trauma of seeing their beloved pet in so much pain, Galindo has two children who have unwittingly become victims of the abuse. Three-year-old Alfonso Jr., and one-year-old Regina are inseparable from Pupa. What’s not to love? Galindo refers to Pupa as a beloved member of the family.

He said, “Me and my wife are now concerned. This is a family dog. My kids wake up and hug the dog. The dog sleeps inside.” He wonders if the pepper-spray incidents have anything to do with the respiratory issues his kids recently developed. “Countless trips to the ER and urgent care, and countless medications. I get livid thinking about it. This is the health of my children,” said Galindo. [4]

The case is reported to the police

“I believe what he’s done to our family is criminal,” said Galindo. He reported the case to the local police and showed them the footage. He also complained to the postal service who have launched an internal investigation.

USPS released a statement to NBC 7 which read, “We do not condone our employees behaving in a manner which is not professional and courteous. The appropriate personnel and corrective action will be taken, as well as training given to all local carriers.”

When Galindo filed the claim with USPS, he received a letter from the post office saying he had to move his mailbox or they would cancel mail service to his home. Galindo said the letter was like adding salt to the wound — or pepper in this case. “Never did I suspect the mailman. Never did I suspect someone that you trust with your mail, with your packages. It was heartbreaking, it was really heartbreaking.” [5]

The mailman who was previously unknown was eventually identified as Nestor Medina. The former mail carrier as of August 2019 was charged with three counts of animal cruelty, to which he pleaded “not guilty.” His fate will be determined by the court.

Galindo is also concerned about other families. He wonders how many other dogs are regularly pepper-sprayed by their resident “mailman from hell,” especially if he’s threatened by sweet little Pupa.

What is it with people and hurting dogs

Just a few years back, 35-year-old Adrienne Martin of St. Louis was arrested after bragging on Facebook about how she killed a dog. The three-year-old shepherd/terrier mix was tortured, set ablaze, and left for dead. Rescuers did everything they could to save him, but he eventually died of organ failure. Martin was put behind bars and made to face felony charges of Animal Cruelty and Knowingly Burning. While that won’t bring the dog back, it’s nice to know that she will face the consequences of her despicable actions. [6]

If you have a problem with a dog, there are several ways to handle them that do not involve torture or murder. You can talk to the owner or report them to Animal Control. Most unruly dogs are kept on a leash. It’s ironic that the victims of these dog abusers are hardly big dogs. They choose to hurt the fluffy little dogs that pose no harm to them whatsoever.

Every dog owner should keep a close eye on their pets. You must protect them from people who enjoy hurting them, especially the little ones.