Could Mainstream Media Be Igniting Pedophilia With ‘Victoria Secret’ Lingerie For Five-Year-Old Girls? 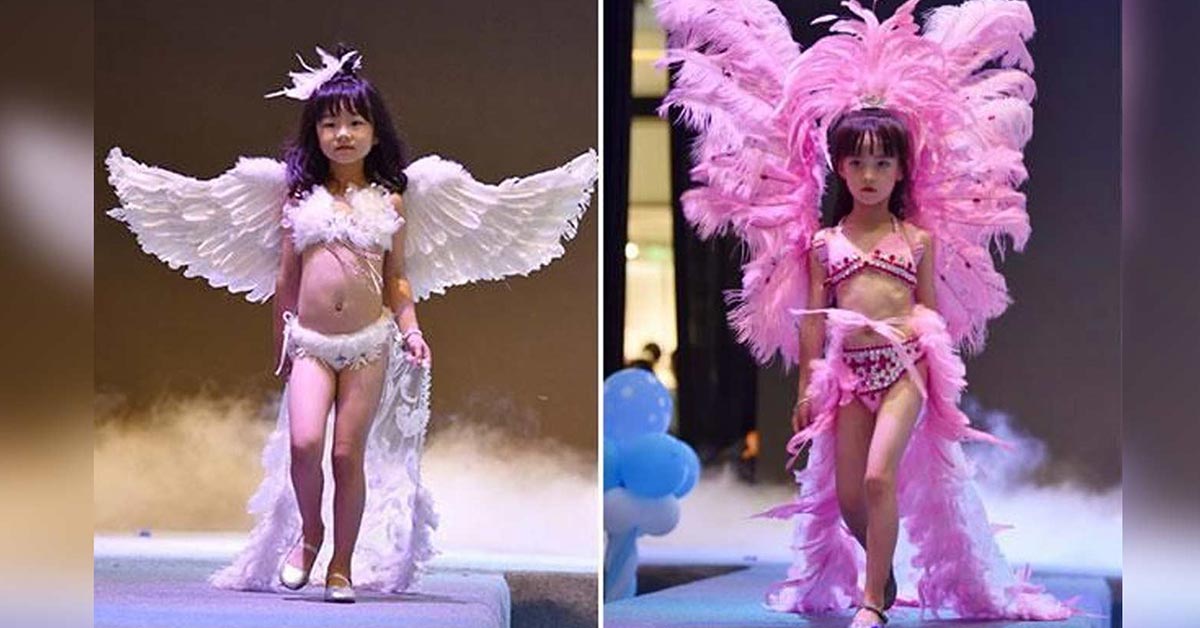 Although technology is super useful, convenient, and necessary, the digital revolution comes with certain drawbacks. Chief among them is its potential for perversion and spreading uncensored content to extremely suggestible individuals.

Over the last couple of years, there have been a growing number of incidents involving adults acting inappropriately towards children. This led to several investigations into elite pedophile rings, leaving many asking how big of a problem pedophilia is in politics, government, and Hollywood.

This is made even worse by the way mainstream media inappropriately portrays children as sex symbols to strangers with questionable characters. A recent fashion show held in China had five-year-old girls dress in revealing lingerie and walk, no, sashay down the runway. The show, which was held at a shopping mall in China, revealed shocking images of young girls as young as five-years-old performing in a Victoria’s Secret–style show.

To say the children look uncomfortable with the whole ordeal would be an understatement. Although dressing a young girl up in revealing lingerie and having her strut down a runway in front of the entire world isn’t quite the same as pedophilia, it sure comes close. More damaging is the impression it gives people of weak moral standards who could start getting ideas as a result of these images.

No matter how you look at it, this act confirms that it is a socially acceptable norm to portray children as sex symbols. According to The Free Thought Project, “The latest movement within media and Hollywood pop culture is a distinctive agenda to normalize pedophilia and the sexualization of children.” [1]

To explain further, this article on The Free Thought Project says:

In the current age of political correctness, some sects of society know no limits as to how far they will go to force acceptance to avoid offending others. In one extreme case of forcing such political correctness, Salon magazine implies that society must be accepting of pedophiles. In two separate articles, Salon refers to pedophilia as an ‘alternate sexual preference’ and suggests that society should embrace these differences by insinuating that this poor man is just misunderstood.

The article and video on Salon deal with pedophiles known as ‘non-offending’ — meaning while these individuals admit they are sexually attracted to prepubescent children, they claim they’ve never acted on it. However, the subject of one Salon article, Todd Nickerson admitted to seeking out jobs as a babysitter and noted that he “fell in love” with a five-year-old whom he babysat. [2]

The above report was published in the beginning of 2017, and it seems to be coming true already. The New York Times recently published an op-ed proclaiming that pedophilia is “not a crime” and instead sympathetically characterizing pedophilia as a “disorder” that pedophiles are living with. This essentially says that people who exploit or fantasize about exploiting children are victims of their condition.

The article went on to cite some tidbits about “recent studies” to give the impression that their claims were backed by science. It included quotes like: “Men with pedophilia are three times more likely to be left-handed or ambidextrous, a finding that strongly suggests a neurological cause.”  This leaves readers to discern the credibility of the author’s unprofessional interpretation of the actual study. [3]

In 2011, blogger Jack Minor wrote that pedophiles had started using the same tactics as gay rights activists and begun to seek for a similar status. They argue that their desire for children is a sexual orientation no different than heterosexual or homosexual. In the same vein, some notable psychiatrists have started advocating for the redefinition of pedophilia in the same way homosexuality was redefined several years ago.

Last year, TFTP reported a move to normalize pedophilia by rebranding it as “Minor Attracted Persons,” in the hope pedophiles will be accepted as a part of the LGBT community.

The CEO of the New York Times, Mark Thompson, was involved in covering up of the case of radio and TV host Jimmy Savile, who raped about 500 children during his career, while being defended by media moguls and celebrities.

More suspicious is the fact that major news outlets including the New York Times, ABC News, and the Washington Post deleted previously published reports on a massive pedophile ring that was busted in Norway.

These facts make one pause to consider the amount of power and influence mainstream media has over our beliefs and perceptions, and what could be their ultimate goal.