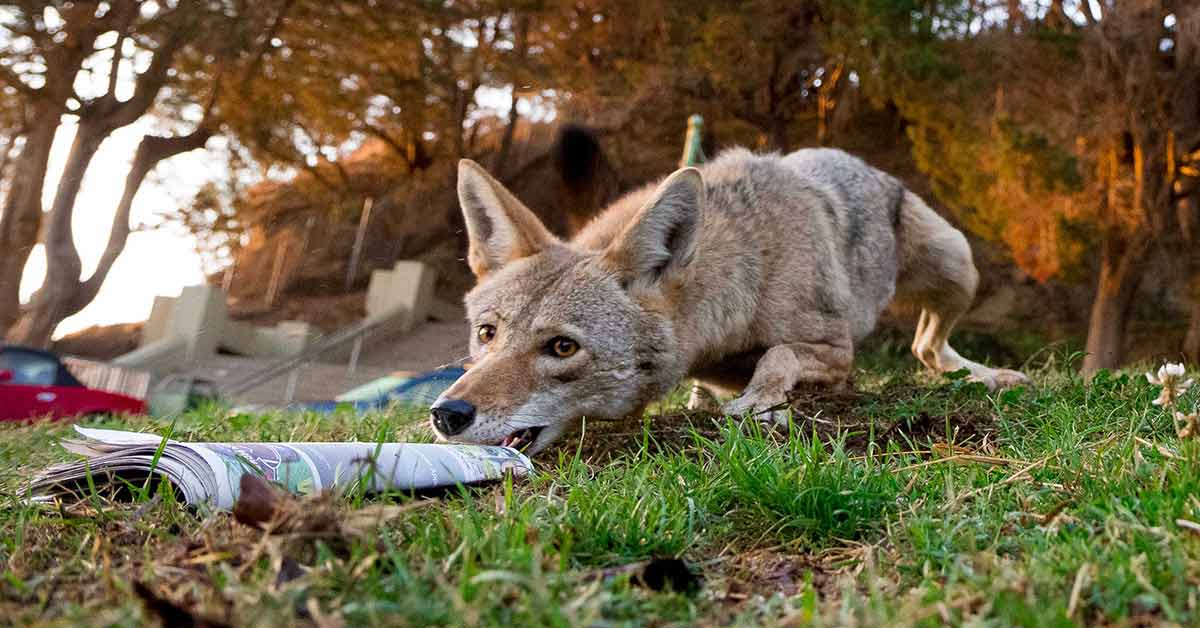 Lately, there has been an increase in coyotes spotted in cities. As suburbs and quieter towns fill up, young coyotes looking to stake out new territories are moving into urban areas. While coyotes are natural predators, they cannot be classified as extremely dangerous. Their presence in cities means we have to find ways to live with them without conflict. For one San Francisco man, the price of coexisting peacefully with a coyote is an extra copy of a daily. [1]

The San Francisco resident — a newspaper delivery man — is charged with delivering copies of newspapers to clients’ doorstep. But trouble arose when he started getting calls from disgruntled clients that the paper wasn’t being delivered. Knowing fully well that he delivers it to their doorsteps every morning, this left the man bewildered.

One morning, while on his daily route, he saw something unexpected that solved the mystery. On a lawn was a coyote playing with a newspaper. He stood at a safe distance and watched this happy coyote toss the paper in the air, catch it and then slide down the hillside with it. When the coyote was tired, he grabbed the paper in its mouth and ran in circles. [2]

It turns out that the coyote was stealing the newspapers from porches right after they were delivered and using them as toys. Armed with this knowledge, the man came up with a game plan.

Each morning, before delivering newspapers to the porches of clients, he made sure to drop off one for the coyote. That way, the coyote had its ‘toy’, and he stayed out of trouble with his clients.

While coyotes do not feed on domestic animals, there have been instances when they have reportedly attacked sheep, poultry, and livestock. However, the most significant source of conflicts between coyotes and human beings centers around dogs. These attacks stem from a lack of sufficient information on how to act if coyotes are encountered when walking our dogs.

The media has reported with fervor conflicts between coyotes and humans/pets, even when it’s a clear instance of a coyote defending itself. If interactions must be prevented or reduced to the barest minimum, certain modifications of human behaviors need to be done. If we are to coexist peacefully with these animals, we need to be better informed. These tips below will tell us what we need to know and how we need to act if and when we encounter this creature. [3]

Do not feed coyotes

The most effective way to prevent a coyote attack is to avoid feeding coyotes. Although coyote can be calm, this should not be an excuse to feed it. Feeding coyotes will eliminate any fear they have of humans and may prompt them to test humans and dogs as possible prey.

Unintentional feeding should also be avoided. Do not leave garbage or pet food out at night. Although coyotes are usually not interested in bird food, they will hunt other rodents that are attracted to your trash.

Keep dogs on a leash

When walking your dogs in areas known for coyote activity or hiking in parks, ensure your dog is kept on a six-foot leash. That way, your dog will have enough freedom to roam about while allowing you to bring it under control in the event of a coyote sighting.

Do not run away from a coyote

If you encounter a coyote, stand tall and assertive. Shout, yell, wave your arms, throw something in its direction, but do not run away. Typically, coyotes are not supposed to be brazen when a human is in sight; however, running away will spur the coyote to attack you. If you spot coyotes in the daytime, exhibit caution  because the coyote may have become habituated to humans and will more likely try to attack.

Report fearless coyotes to the authorities

If a coyote does not respond to hazing, become aggressive to humans or pets, follow you around or come too close for comfort, report it immediately to the appropriate authorities.