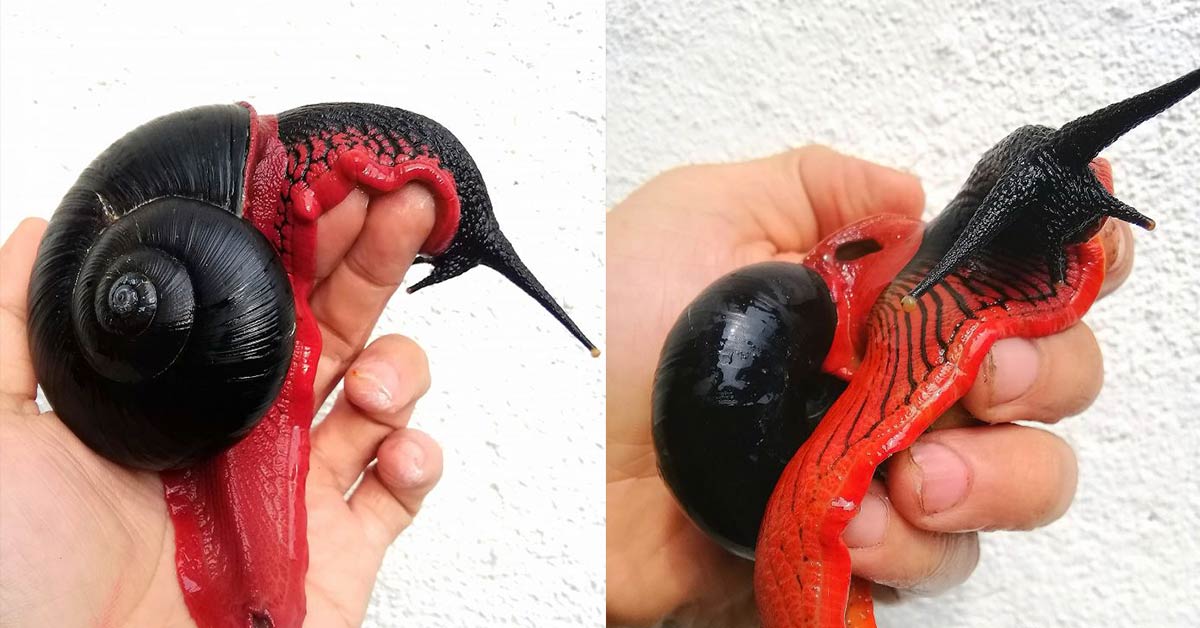 I’m not sure Dracula and his followers would appreciate the description, but I find this gastropod intensely… beautiful. Even snails have cool goths and vampire-inspired personalities, and you’ll have to admit, this species pulls it off effortlessly well.

Fondly known as the fire snail, the incredible Platymma tweediei is found in the Montane Forests of Cameron Highlands, a district in Peninsular Malaysia. [1] These animals are extremely rare and are found only in a 100 km section of these forests in the Titiwangsa Mountain Range. They are said to be the largest land snail from the Peninsula, although some people argue that the Bertia brookei from Borneo may be larger.

There are about 60,000 species of snails and slugs in the world, and quite a number have red and black body colorations, such as the red-bellied black snail. However, the fire snail is the only species where a large percentage of the muscular foot is a bright-red color, and only a fraction of the upper part is black. If this isn’t awesome enough, the shell and the elongated eyes are a jet-black color that completes the entire Dracula effect. For the first time ever, I’m impressed by the shiny effect snail slime has on a gastropod, because it weirdly highlights the unique colors and gives everything a twinkle.

The black color of the snail is due to an abundance of silky black periostracum, a naturally occurring compound that makes up the outermost layer of the shells of many mollusks. [2] The black periostracum is quite rare and found only in the most unique species. Although calcium carbonate makes up about 98% of the shell content of most mollusks, the fire snail’s shell has a high deficiency of this compound, made up for by the robust supply of periostracum.

Most people in the world either belong to the dog or cat group, and a small percentage is split into hamsters, guinea pigs, birds, rabbits, goldfishes, and a few other house pet choices.  Perhaps, thanks to SpongeBob and his pet snail, Gary, people are now buying snails as pets, and the fire snail, although rare, is one of the top choices.

However, the snails make for difficult pets to care for at home. They were abundant in the Tanah Rata forests and have been excessively handpicked from the region to be sold as pets in many places around the world.

Unfortunately, fire snails can only survive in very cold and humid environments, and anything short of the conditions they are adapted to would cause them to die off very quickly. While most places can be as cold as Tanah Rata, the humidity in the district is highly unbeatable at 79%. Outside of Southeast Asia, these animals are highly unlikely to survive. To solve the problem, most snail breeders who sell these species choose to keep them in temperature-regulated tanks where the humidity can be controlled.

However, these animals are not supposed to be taken out of their native regions. Due to excessive trade and increased habitat degradation, these snails have come under alarming population threats in recent times. [3] Urban and agricultural activities have led to massive destruction of their habitat in the Titiwangsa Mountain Range, and snail conservationists are now raising the red flag for the country to set up protective policies for the species. Also, because of their unique body coloration, the snails are in high demand all over the world, further aggravating their conservation troubles.

The animals are so rare that they are found in only one part of the world, outside of which they are not likely to survive. The least any human can do is to admire them from afar and let them stay home in peace.

The fire snail can lay up to 88 eggs in one clutch, most of which are easily eaten by spiders and rodents in the wild. While the life expectancy of most snails depends on their habitat, the fire snail is expected to live as long as three to five years if allowed to thrive in its natural environment.