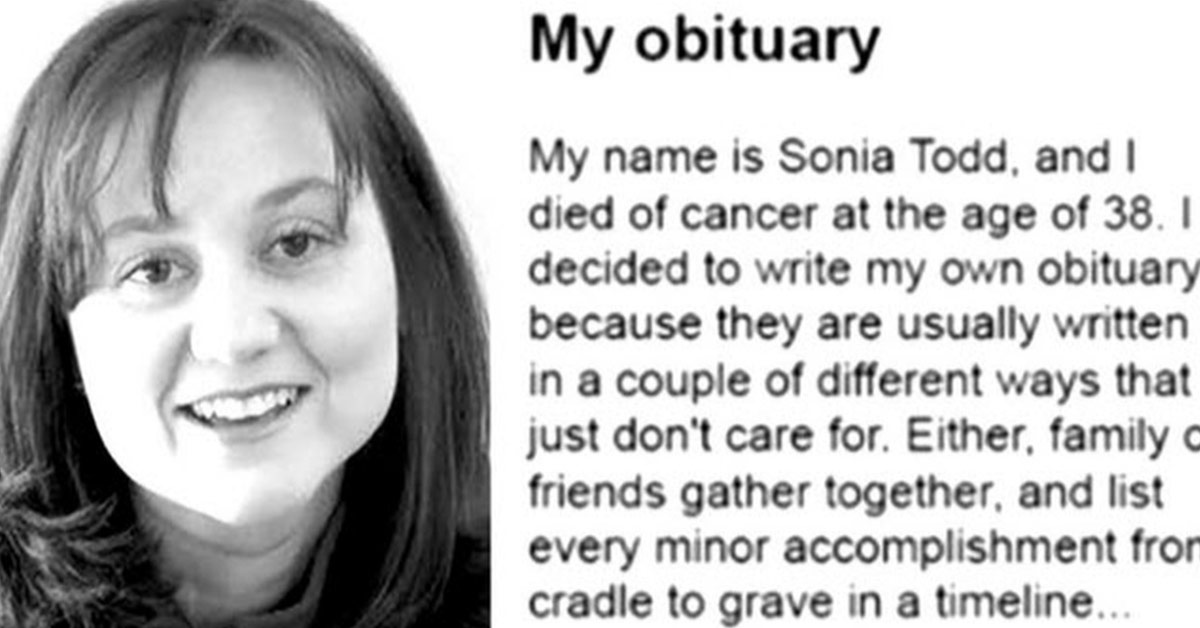 People put a lot of effort into planning parties, be it a birthday party, wedding, quinceanera, or retirement party. However, you don’t expect the same energy when it comes to death, let alone when the planner is the one dying.

Death typically brings up morbid feelings. No one knows for sure what’s on the other side. For most people, it’s one of those “it will happen when it happens” moments. They’re content to let someone else worry about their deaths when the time comes. But this woman took the bull by the horns.

In 2012, 38-year-old Sonia Elaine Todd passed away from cancer. However, after she was diagnosed with the terminal illness, she penned a touching and truthful obituary. The mother-of-two from Moscow, Idaho, poured her heart and soul into the piece. It reminded her friends, family, and strangers of the important things in her life. While the obituary is several years old, the message remains true. [1]

Why did Sonia choose to write her obituary?

“My name is Sonia Todd and I died of cancer at the age of 38. I decided to write my own obituary because they are usually written in a couple of different ways that I just don’t care for. Either, family or friends gather together and list every minor accomplishment from cradle to grave in a timeline format, or they try and create one poetic last stanza about someone’s life that is so glowing one would think the deceased had been the living embodiment of a deity.”

We might not want to admit it, but this does make sense. Despite being such a sad read, it still is comforting. [2]

First, she wrote about her accomplishments

This part of her obituary goes to show just how straight her priorities were. She didn’t waste time mentioning immaterial things, rather she acknowledged what meant everything to her.

“I don’t like the timeline format because, let’s face it, I never really accomplished anything of note. Other than giving birth to my two wonderful, lovable, witty, and amazing sons (James and Jason), marrying my gracious, understanding, and precious husband (Brian), and accepting the Lord Jesus Christ as my personal savior — I have done very little. None of which requires obit space that I have to shell out money for.”

Sonia did not ‘fine-tune’ her obituary

While people don’t outrightly lie in obituaries, they do “strategically omit” some points and give room for “minor misleading.” Sonia pointed this out in her write-up.

“I also didn’t want a bunch of my friends sitting around writing a glowing report of me which we all know would be filled with fish tales, half-truths, impossible scenarios, and outright-honest-to-goodness lies. I just don’t like to put people in that kind of situation. The truth, or my version of it, is this: I just tried to do the best I could. Sometimes I succeeded, most of the time I failed, but I tried. For all of my crazy comments, jokes, and complaints, I really did love people. The only thing that separates me from anyone else is the type of sin each of us participated in. I didn’t always do the right thing or say the right thing and when you come to the end of your life, those are the things you really regret, the small simple things that hurt other people.”

Some lighthearted humor to lighten things up

It’s not often you find an obituary with a lot of humor. Sonia managed to turn a sad situation into something that can put a smile on the faces of her loved ones, even for a few minutes of nostalgic reminiscence.

“My life was not perfect and I encountered many, many bumps in the road. I would totally scrap the years of my life from age 16 to 20 . . . ok, maybe 14 to 22. I think that would eradicate most of my fashion disasters and hair missteps from the 80’s. But mostly, I enjoyed life. Some parts of it were harder than others but I learned something from every bad situation and I couldn’t do any more than that. Besides there are some benefits to dying youngish, for example, I still owe on my student loans and the jokes on them cuz I’m not paying them. Plus, I am no longer afraid of serial killers, telemarketers, or the IRS. I don’t have to worry about wrinkles or the ozone layer and/or hide from the news during election season.” And of course, who doesn’t appreciate a good IRS joke?

Writing about a loved one is hard enough, let alone, writing for oneself. Sonia addressed that by writing, “Some folks told me that writing my own obituary was morbid, but I think it is great because I get a chance to say thank you to all the people who helped me along the way. Those that loved me, assisted me, cared for me, laughed with me, and taught me things so that I could have a wonderful, happy life. I was blessed beyond measure by knowing all of you. That is what made my life worthwhile.” [3]

In memory of me

Sonia ended the unique and inspirational write-up by telling her friends and family what to do in her memory.

“If you think of me, and would like to do something in honor of my memory do this:

Ashley Ann Kuzma, a 32-year-old woman from Pennsylvania who died of recurrent laryngeal cancer on September 22, 2019, wrote her own obituary. She wrote it before her death “to make the transition easier on her family.” The high school teacher said that because her cancer “would not take no for an answer,” she had a lot of time to “think about death.” And it taught her to let go of insignificant things and just enjoy the people and place. [4]

Others plan funerals for themselves

That is the case of 33-year-old Suzanne Bearne. The fact that she had put more thought into her dream funeral than her future wedding says a lot about her personality. She said, “I’ve masterminded a ceremony and burial that’s truly personal and exactly how I wish to be remembered. After all, death is our only inevitability. Why not go out with a funeral that truly resonates?” [5]

Death is inevitable, although no one knows exactly when it will be their time. Nonetheless, it’s prudent to learn from these people who have shown incredible bravery, and endured tough times with dignity and honor.