Flamethrowing Tractors: A New Weapon in the War on Weeds and Pests 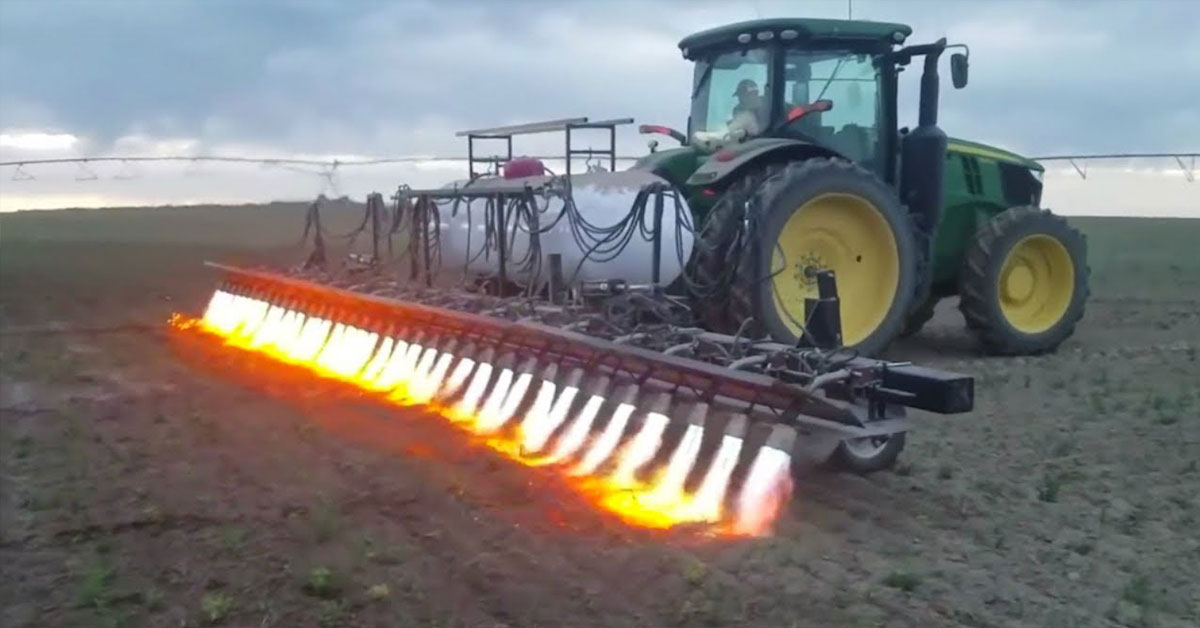 Pesticides have long been used in agriculture as an effective means of getting rid of weeds and pests. However, with a rising awareness of the harmful effects of pesticides, land managers today are now looking to flamethrowing tractors that cook weeds to death.

Most kids grow up wanting their very own flamethrower, whether to play a role in some imaginary action plot or to melt away the snow instead of shovelling it. Thankfully, parents, being the wise and reasonable people they are, decide not to fulfil that youthful fantasy for them.

But now, these cool flamethrowing tractors are starting to step in and fill that fiery void. Pesticides have long been the first pick to control weeds and pests, but they can also be harmful to the environment, for example, by infecting water sources and disrupting the ecosystem.

Pesticides have also been linked to many health hazards in humans, from minor symptoms like headaches, dizziness, and nausea to severe impacts like cancer, endocrine disruption, and reproductive harm. [1]

Organic farming has become the preferred farming method to reduce pollution, increase soil fertility, use less energy, and reduce soil erosion while conserving water. The process of farming without pesticides is also better for people as well as animals that live close to farmlands.

Farmers have found a new, effective solution with all of the positive effects of pesticides and none of the negative: flame weeding.

Flame weeding is precisely what it sounds like: a regular farm tractor is equipped with a row of flamethrowers that burn off any unwanted obstacles to their growing crops.

This looks simple and straightforward on the surface, but there’s actually a lot going on behind the scenes. The flamethrower doesn’t just set fire to weeds; it also starts a chain reaction that increases the effectiveness of this method.

It takes a lot of fire to make farming look cool

Flame Engineering, a company that deals with flame weeding equipment, explain that their equipment is designed to destroy the plant structure of weeds to ensure they can no longer perform photosynthesis. This kills them off more effectively than pesticides.

“Flame weeding is what we like to call a ‘slow kill,’” explains the company on their website.  Essentially, you are destroying cell structure in the plant leaf. The weed will no longer put energy toward growth (photosynthesis), taking the kill though the root system.

“Yes, flame weeding will kill the roots too! Even on big weeds (over 6″), you will see a stunting effect and even a kill within a few days, depending on how established the root system is and how long the plant was exposed to heat.” [2]

Who could have guessed that agriculture could be so hardcore? The results are undeniably spectacular to look at.

However, the practice of burning away weeds and pests has its opponents both on and off the farm. Some people have questioned its perceived effectiveness, asking if there is enough evidence to support mainstream adoption.

“I don’t really get how this will deal with [armyworms] though,” wrote agricultural consultant Aina Tolulope. “Will it be used before or after the infestation? We all know that [armyworms] start affecting the crops like two weeks after planting. Won’t this technique burn off the crop from the entire farm?”

More than a century ago, burning was the preferred method for getting rid of weeds and pests on farms. Records show that more than 80,000 farmers nationwide primarily controlled weeds by burning them in the 1940s and ’50s, often using diesel fuel.

Then the post-war boom in chemical research followed, which sparked tremendous interest in pesticides and herbicides for the farms and home gardens, increasing our reliance on chemical products. It’s only right that the once-intense interest in flame weeding comes back once more.[3]

Not just for farmers

This isn’t the only instance of using fire to kill off weeds and pests. Meghan Fellows, a biologist in the parks system in Montgomery County, is one of many charged with the control of weeds in urban parks by shooting 400,000 BTUs at them through her four-foot flamethrowing wand. [4]

Flames are often used in situations where pulling the weed out by hand can do more harm than good, and chemical controls are equally troublesome.