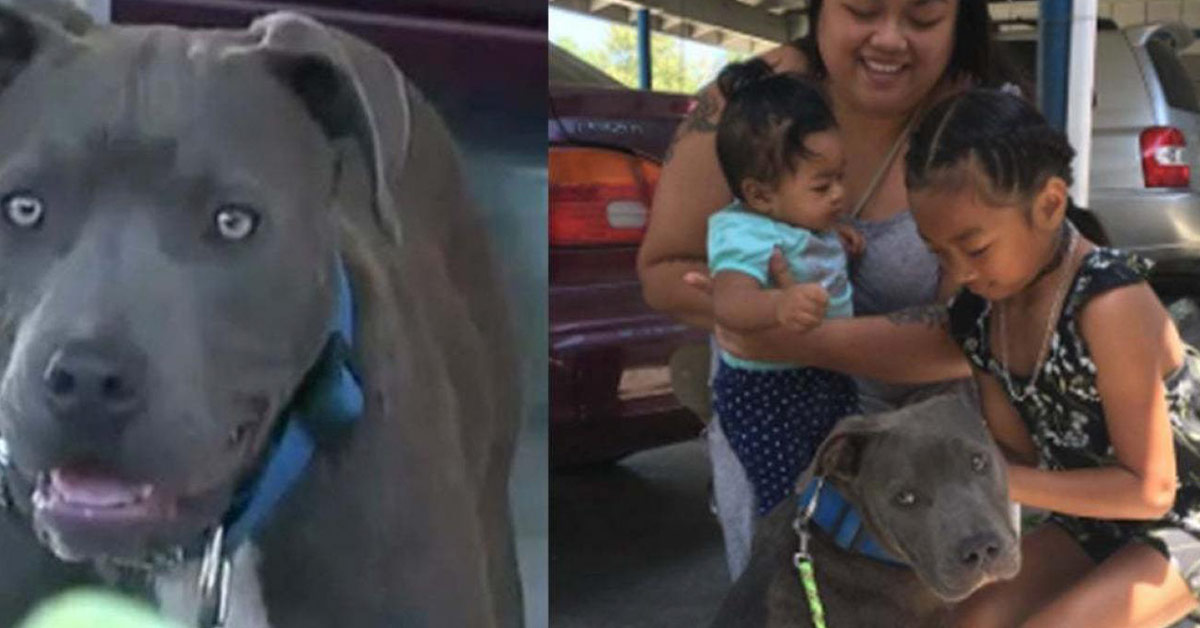 Dogs are not just man’s best friend; they have also helped protect man since historical times. From sensing approaching danger during hunts, to serving as home security, and, in this case, saving whole families when a dangerous situation arises.

Sasha, an 8-month-old pit bull, has recently been thrust into the limelight after performing an unusually heroic act on Sunday, June 3, 2018. On that fateful day, she was sitting outside of her home in Stockton, California, when fire began to engulf the apartment building. Sadly, Sasha’s owner, Nana Chaichanhda, was sleeping inside the building along with her 7-month baby.

Miraculously, the quick-thinking dog jumped into action and started barking and banging against the backyard door. This alerted Chaichanhda that something was wrong before she noticed the blaze herself. She only realized there was a fire when she went outside to try and figure out why Sasha was so upset.

“As soon as I got to the door, she runs in (and) starts barking, and I’m like, ‘OK, this is weird. This is not like her,’” Chaichanhda told reporters. “I looked up, and there’s black smoke coming from my neighbor’s house. You can see the flames coming out.” [1]

After seeing the flames begin to ravage her neighbor’s house as well as other parts of the apartment complex, Chaichanhda immediately ran in to get her daughter. However, when she entered the room, she saw Sasha already trying to save the young girl.

“She had already had my baby by the diaper and was dragging her off the bed,” she said. “I was like, ‘Oh my gosh, what are you doing?’ Thanks to Sasha, we were able to get out safe and call 911.”

The fire eventually destroyed most parts of the four-plex but, thanks to Sasha’s warning, the family was able to make it out of the apartment unharmed. Unfortunately, Chaichanhda, her baby, and Sasha were left without a home as a result of the fire and had to stay with an aunt who lived in a part of the apartment complex that was not affected by the blaze.

A family friend started a GoFundMe to help the family get back on her feet, and it quickly met its goal as everyone was touched by what Sasha did for her baby sister and mom. Chaichanhda says that she and her baby are safe because of Sasha, and she hopes her story would help shed some light on the negative perception surrounding pit bulls.

“I owe her everything. If it weren’t for her, I would have still been in bed, and things could have taken a worse turn,” she said. [2]

Pit bulls are often regarded as dangerous, aggressive dogs that are only good as guard dogs. This, however, couldn’t be further from the truth; firstly, this is a myth, and secondly, there is no such breed as a pit bull. Dogs people describe as pit bulls can be a number of different breeds that show distinct characteristics.

In the past, the term pit bull was used to refer to dogs that have been bred and conditioned to fight in pits. The history of breeding fighting dogs dates back more than 1,000 years in a blood sport called “bull-baiting” where a bull was tied to a post and dogs were set upon it. This practice was outlawed in 1835 and these dogs (mostly made up of bulldogs and terriers) were crossbred to create dogs that we know today. [3]

Pit bulls constitute the majority of dogs used for illegal dog fighting in America. Over the years, owners and breeders of pit bull-type dogs have had to deal with a strong stigma about the violent nature of their pets. Despite the fact that controlled studies are yet to identify this dog group as disproportionately dangerous. [4]

Most dogs that are called pit bulls share similar physical characteristics, including wide skulls, well-developed facial muscles, and strong jaws. In some cases, these features may be accompanied by a square-shaped head or bulky body type. However, the natural variation among different dog breeds makes it challenging to identify them visually.

To help enhance the reputation of pit bulls, it is important that dog owners and breeders take extra precautions and care to protect their pets and ensure they don’t harm others. As society continues to misrepresent pit bulls or, more precisely, the variety of breeds that make up pit bulls, the only solution could be a multi-faceted effort by pet owners, veterinarians, and other prominent experts in the field.