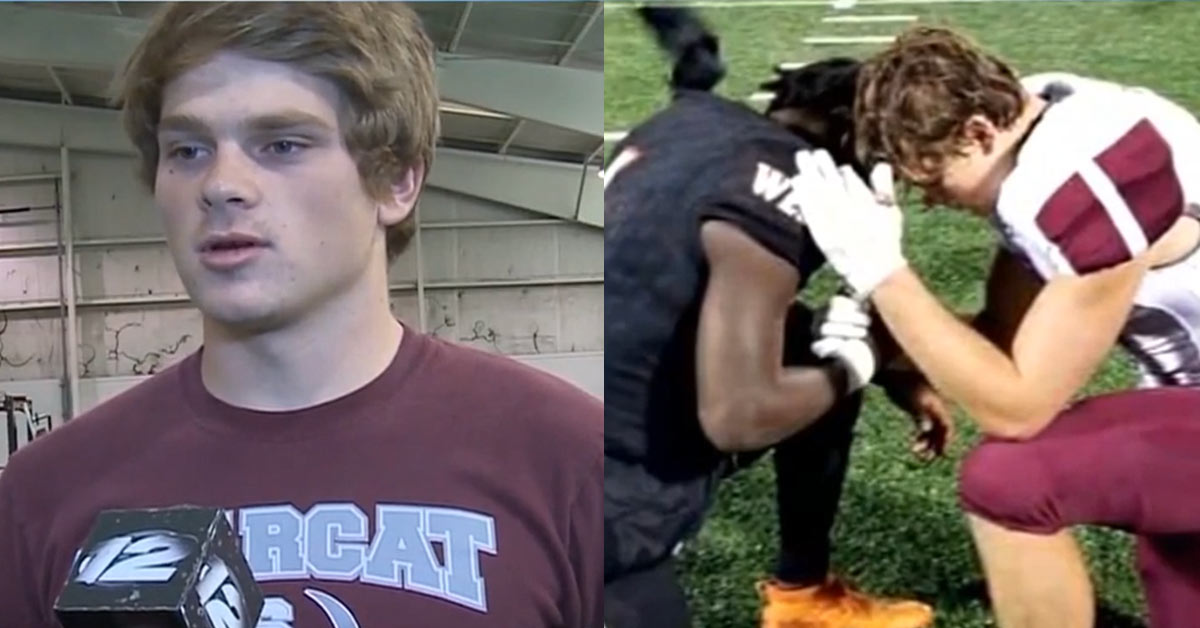 In sports, it is said that it doesn’t matter who wins or loses. What matters is that both teams agree to compete in the spirit of sportsmanship and accept the outcome of the match. In this case, two opposing high school players united in prayer after their game.

Also known as the ‘Lone Star State,’ Texas is famous for its BBQ, hot temperatures, live music, football, and religion. And it seems that at least two of those things go hand in hand as a photo taken earlier this month captured a special moment when two opposing high school players united in prayer after their game.

Both players shared this special moment after the final whistle blew at Sherman High School. As soon as the game ended officially, Gage Smith asked his friend Ty Jordan, who was on the opposing team of West Mesquite High School, if they could take a moment to pray for Jordan’s mom, who is battling stage four lung and bone cancer. [1]

“It meant the most to me,” Jordan said, after a photo showing him and Smith on their knees went viral on social media. “You don’t usually see that.”

They were both good friends who often played 7-on-7 flag football in the spring and summer for the past two years. However, whenever they met on the field during a match, as they did on Saturday, they were enemies on opposing sides.

This time, Smith felt the need to pray for Jordan’s mom, Tiffany Jordan, 42, who he had heard was battling cancer. “It was meant for just me and him to have a moment and to pray over his family and for his mom,” Smith said. “I just wanted to let him know there are other people thinking about him and his family, and let him know he has somebody to turn to.” [2]

The touching moment was captured by the wife of Smith’s head coach at Sherman High School. She passed it along to Jordan’s aunt, Takka Jordan, who posted them on Facebook. The touching images and backstories quickly made the photos go viral, and they received over 150,000 likes before they were taken down. They also found their way to Jordan’s mother, who was touched by Smith’s actions.

“I was speechless,” Tiffany Jordan said. “It made me cry. (Smith) didn’t have to do that. The fact that he took the time to pray with Ty for me, that took my breath away.”

In an interview, Jordan said that the moment “means a lot” to him and showed the importance of “taking some time out of your day to pray for others, speak for others, do little things. That’s what really counts.” [1]

Although Smith’s team won the game with 56–27 over Jordan’s school, he says that that was secondary to his concern for Jordan’s mom.

“I would’ve done that whether we would’ve won or lost,” Smith said. “During the game, we’re enemies, and we’re gonna play and try to win the game, but you still have that respect for the other opponent. I wanted to do that for him.” [2]

J.D. Martinez, head coach of Sherman High School, was not surprised by Smith’s actions as he [Smith] did that all the time. “That special moment with Gage, I see that kind of stuff weekly from him,” he said. “I see it all the time. I’m glad that other people are having the opportunity to see it, too. [3]

“He’s a true leader, and he has compassion, and it followed through for a lot of the guys on the team.”

Smith believes that this is an excellent example of how sports can help unite people from different backgrounds.

“Football brings people together in so many different ways, and that was just one example of it that night,”Smith said. [4]