Sometimes we can become so burdened with problems in our lives that we forget to see the bigger picture. That’s why it’s great to hear and share stories like Edwin Lopez’s, who went from being homeless and sleeping on the streets, to a rookie police officer for the California Highway Patrol.

“This is the first (time) I’ve been back since then,” said Lopez, 26, when standing in the Sacramento park he would sometimes sleep in. “I’ve shed a few tears reflecting on what I’ve been through.”

Edwin’s story of how he went from working at a tire shop to homeless is unfortunately one that is common in California. California has the highest rate of homelessness of any state and accounts “for nearly half of all unsheltered people in the U.S.,” according to the U.S. Department of Housing and Urban Development.

Cities across the state, including Los Angeles and Oakland, recently have reported a sharp increases in homelessness. The next census for Sacramento’s homeless population is expected to show a sharp increase according to city officials.

Edwin’s Story: From Homeless To Healing 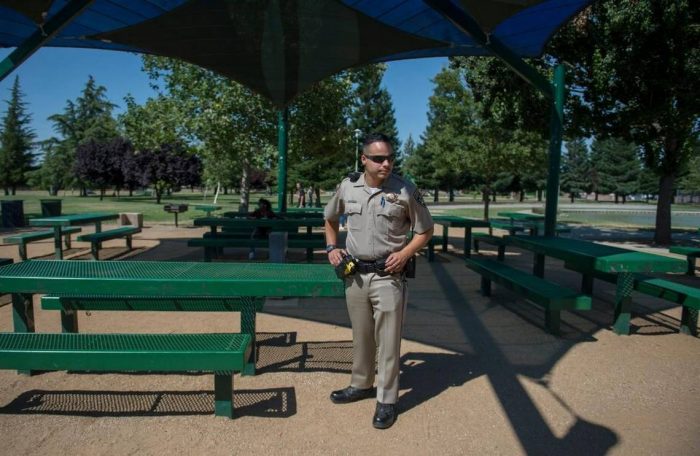 While it is true that it is easy to slip into homelessness, Edwin proved that there is a way out for everyone. He used to dumpster dive, he asked strangers for food and water, and he has been assaulted while trying to sleep in a public park.

When Edwin lost his job at the tire store, his family was not able to support him. Part of that has to do with an increase in housing costs as well as a lack of supportive services. Edwin, being 21 at the time, was too proud to ask for help or to share just how bad his economic situation was.

Slowly, his social safety net began to unravel. After he lost his apartment, he slept on his friends’ couches for as long as he could. After that was over, he slept in his car.

“I would try to find nice neighborhoods but park in areas where people wouldn’t call the cops on me,” Edwin said. Unfortunately, he was often woken by an officer tapping on his window. “They would ask, ‘Are you between homes, sir?’ ” Lopez would say he was on a long distance drive and had pulled over because he was tired.

Then his car was repossessed and he was living on the street.

Edwin was homeless while on active duty for the California Army National Guard. Edwin noticed that the longer he was homeless, the harder it was for him to get a job. “I had a lot of people who had ‘Help Wanted’ signs tell me they weren’t hiring, probably because I looked homeless,” he said.

He would sleep in construction sites, bushes, and even in public washrooms. He would lay out his old clothes on the floor and try to sleep.“It didn’t work out too well,” he said. The stench would keep him awake.

But Edwin kept positive. He looked on the bright side as much and as often as he could. “I’ve never been a person to complain about my life,” he said. “Even when I was homeless, I tried to look at positive things. I would say, ‘I’m homeless, but I could be dead. I could be addicted to drugs or alcohol. I could get an infection from all the horrible living I’m going through, but I haven’t.’

“Other than I was starving, that was my blessing,” he continued. “That attitude is what got me out of it.”

But he didn’t get out before the streets got a piece of him. Edwin enjoyed sleeping in a park in south Sacramento because he was familiar with the neighborhood and, “The park has benches with an awning where you could sleep when it was raining,” he said.

While he slept, he was attacked by a group of teenagers. They beat him and he ended up with a bruised and bloodied face, but he was able to fight them off. “There were five or six of them,” he said. “I hurt a few of them. That’s what got them off of me.”

This was Edwin’s lowest point, and the weight of his situation was starting to buckle his knees. “I had really bad depression for a while,” he said. “It never got to the point where I was suicidal, but I was in a really bad depression. I did a lot of praying. I would say, ‘God, I don’t know what lesson you are trying to teach me, but I learned my lesson.’ ”

But, his salvation would come in the form of a friend at the National Guard. When Edwin shared his story, his friend hooked him up with a job service assisting veterans. That led to an opportunity with the California Conservation Corps.

Although he had lost most of his possessions, Edwin held onto his cellphone. “I knew I couldn’t get a job if the outside world couldn’t reach me,” he said, although the $50 a month phone bill often meant he would go without eating.

When the CCC called and asked him for an interview, he jumped at the chance. He snuck into a gym to shower, and shaved by bumming razors from strangers. Before the interview, he remembers saying to himself, “If I don’t get this job, I could end up dead.”

The interview went well and the CCC called him back the next day, offering him a position doing fire clearance. He could either start in a few days or a few months. He chose days.

The CCC provided Edwin with food, clothing, and a stipend, and Edwin was able to get back on his feet. Not long after he applied to the California Highway Patrol.

Edwin passed all of the CHP’s tests. He met the minimum educational requirement of having a high school equivalency and his criminal record was clear. Background checks revealed that Edwin had worked to pay back the debts he had racked up when he became homeless.

“(The vetting process) is an intrusive look at who you are, and everyone we talked to liked him,” said Joseph Farrow, CHP commissioner. “He had overcome so much with perseverance. He was trustworthy. Here is a guy who was homeless, and all he wants to do is to help people.”

Lopez’s CHP colleagues have taken note of his story as well. He was singled out by his superior officers during his graduation ceremony this past November in West Sacramento. He carried the American flag during the ceremony.

Like all new officers, he is on probation and his job will not be permanent until he reaches the anniversary date in mid-November. But he isn’t worried, the rigors of his new job is nothing compared to what he went through.

How does Edwin stay positive now? “Whenever I doubt myself now I think, ‘You used to eat garbage,’ ” he said. “There is not much worse you can go through.”

Penelope Wilson
Health enthusiast
Penelope is a writer and health enthusiast with a B.Arts in Language Studies. She is a deeply spiritual person, a relationship expert, a nutrition freak, and a skin-care maverick.
Advertisement