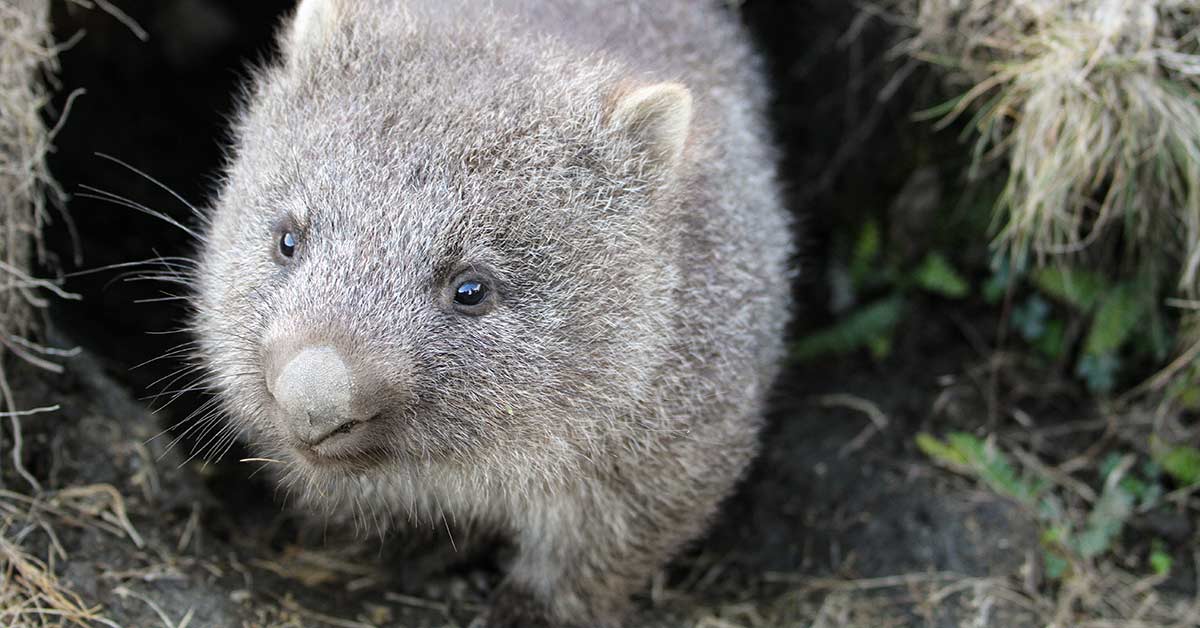 As the Australian bushfires rage on, humans have done just about anything possible to save themselves, animals, and property. Now, it seems that the animals are putting in their best efforts to save themselves.

Wombats are short, stubby-legged marsupials found in Australia. They aren’t as widely known as koalas and kangaroos.

The Australian bush fires have left nothing but devastation in their wake. However, recent reports show that wombat burrows have provided shelter allowing other animals to take refuge. These tunnels and homes of wombats are complex underground systems that are insulated from the destructive fires that blaze above them. While wombats aren’t inviting these animals in themselves, inadvertently, they’re getting pinned as heroes.

According to the reports, the tunnels have served as safe houses for animals of other species including wallabies and echidnas. These animals have survived the bushfires by fleeing into the wombats’ tunnels.

After documentary filmmaker Peter Hylands visited the burned landscape of Cobargo wildlife sanctuary, he said, “You’ve got animals that are completely unscathed and those must be the animals that have been under the ground; it’s the only explanation when the fire zones are so extensive.”

According to him, the landscape is burned and the devastation to wildlife is incredible. “There are quite a few wombats in that region, and there’s quite an extensive network of burrows. What was particularly amazing is it’s clearly not only wombats who are using those burrows in the firestorm,” he added. [1]

As for the animals that seek refuge in burrows, Yolandi Vermaak, wombat rescue manager said, “At most, there would be animals fleeing into burrows — lizards, rabbits — those sort of things. I have even seen a small wallaby.”

People are still offering their help

While wombat burrows may be helping to some degree, people are still doing their best to make sure all the animals are safe. Wombat Rescue and the Sleepy Burrows Wombat Sanctuary has partnered on a mission to provide aid to the wildlife affected by the fires around Tallaganda, a national park in New South Wales, Australia.

Caretakers at the park have been dropping off supplies including food and water in the area and intend to keep doing so until they get some significant rainfall. Vermaak has been personally crawling through the burrows to check on the surviving wombats. She said she hasn’t seen one burnt wombat during her search.

The brutal bushfires, which began in Australia last year, has proven to be more of a crisis than any other bushfire the area has experienced. There have been 28 confirmed deaths nationwide including five brave firefighters whose tanker was overawed by the flames. The damage to property such as homes and other buildings has been devastating and the numbers run in their thousands.

Very high temperatures, drought, and climate change have exacerbated the situation. The crazy winds don’t help since they increase the spread of the flames and make the hazardous smoke fan out over long distances. [2]

There seems to be a glimmer of hope in the case of the bushfires as heavy rain fell and doused some of the flames in some parts of Australia, including Victoria, New South Wales, and Queensland; however, it seems the rain comes as some sort of a double-edged sword since there are now threats of flooding to some areas. [3]

Regardless, this comes as a relief to Australians since the fires have caused unimaginable pain over the past few weeks.

The amazing burrows built by wombats

It’s incredible how these animals can come up with an extensive network of tunnels and build habitable burrows (or warrens) without any knowledge of architecture. It’s almost as if they were building survivalist underground bunkers for when such a tragic event as the bushfires would occur.

These animals are not easily seen since they spend most of the day in their burrows. And despite their slow-moving appearance due to their wide bodies and stubby legs, they can run up to 25 mph over short distances. [4] This speed, unfortunately, will not enable them to outrun the bushfires, so their best bet is to retreat to their relatively safe burrows.

Wombats are very good diggers. Their burrows can be anywhere from three to 30 meters long, and up to 3.5 meters deep. The diameter is typically the same size as the wombat, around 20 inches wide, which might be large enough for a tiny person to crawl into. Despite how snug their burrows are, wombats are agile enough to turn around in them.

A recent study by a team of scientists at the School of Biological Sciences, University of Adelaide, Australia, employed the use of ground-penetrating radar (GPR) to map the burrows of wombats in a non-invasive way. The data from the study will be used to build a model that will provide a nationwide estimate of the distribution and abundance of wombats in the country.

Another study shows that temperatures in the tunnel can be less than 1ºC in periods when the surface temperature is up to 24 ºC. Humidity gradients vary depending on the depth and length of the tunnel, and as for oxygen and carbon dioxide in unoccupied tunnels, their levels were similar to those in free atmospheric air. [5]

This goes to show that the tunnel conditions are indeed good enough to sustain these animals during the fires.

Are these marsupials truly “shepherding” other animals into their tunnels?

Well, “shepherding” might be a little too strong to describe the actual situation. Jackie French, author, and director of the Wombats Foundation, doubts the claims.

She said, “Wombats are extremely short-sighted. They focus mostly on food and dirt. It would be hard for them to see well enough to shepherd, nor have I seen one do so.“

“Wombat behavior is usually extremely limited — eat, sleep, scratch — but they are capable of extraordinary ingenuity in the rare times it’s needed. I’d have dismissed the shepherding claim altogether if I hadn’t known a wombat who decided to make friends with me four decades ago, and showed me around the bush. But he didn’t shepherd — he just waited, looking around to see if I followed. Baby wombats follow their mothers by trying to touch them at all times — the mothers don’t shepherd their young as a dog might do.“

“It’s unlikely any shepherding would be necessary. [Other animals] would know the wombat warrens existed and are intelligent enough to seek shelter.”

However, she isn’t fully dismissing the claims of them opening up their homes to other species of animals in times of need. “I’ve seen wombats share their burrows in times of crisis with other wombats, snakes, quolls, possums, bandicoots, echidnas, bettongs and possibly other smaller creatures,” she added. [6]

All in all, these wombats may tolerate others in their homes but they’re not inviting the other animals themselves. There is shelter and animals-in-need find it themselves, simple as that.

Here’s to a new dawn for the Australian people and wildlife; hopefully, things will get better very soon.