Huts For The Homeless Are Becoming More Popular In The Northwest 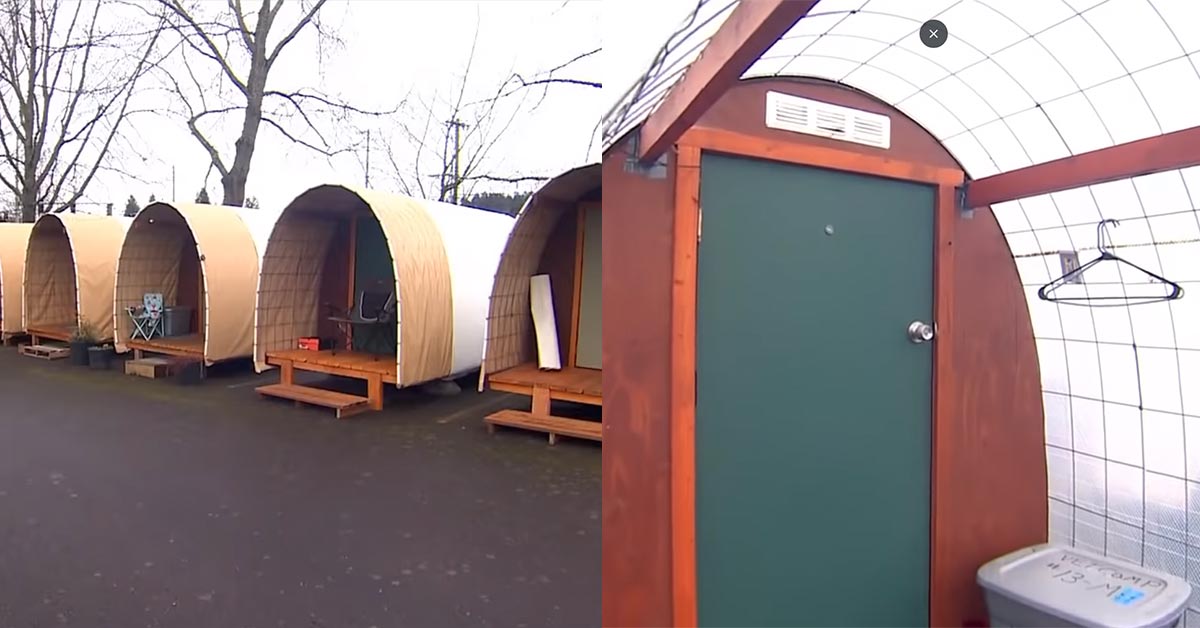 The level of homelessness in America has been on the rise since the 1870s. According to the US Department of Housing and Urban Development’s Annual Homeless Assessment Report, there were around 553,000 homeless people (0.17% of the population) in the United States on any given night in 2018. [1] All over the country, communities are striving to come up with new options to combat homelessness. To that end, Community Supported Shelters, a nonprofit organization in Eugene, Oregon, and Washington, has come up with Conestoga Huts, which provide shelter and stability for homeless people.

Huts for the homeless

The Conestoga Huts are shelters for the homeless that are affordable and durable. They are called Conestoga Huts because of their resemblance to the Conestoga wagon that early pioneers rode in their exploration of the American West. They cost about $2,500 to build and do not take a lot of time to put together. This is as opposed to Tiny Houses, which cost around $10,000 to $20,000 and take more time to assemble.

The Conestoga Huts were designed by Erik de Buhr who works for the Community Supported Shelters in Oregon.

Features of the huts

The huts have 60 square feet of living space with a built-in bed, and a 20-square-feet front porch with a rain fly option. Overall, the dimensions are 6′ wide by 14′ long and the huts are approximately 8ft tall. There are lockable doors and windows, which is a great way to prevent theft and keep the property safe. The huts are designed in such a way that they can be assembled, disassembled, and refurbished. Despite not being as warm as other dwellings, they are made with insulated walls, floor, and roof, and as such are warmer than tents.

These huts were designed as a temporary option

They were built to serve as temporary living spaces for homeless people. The main purpose of these huts is to provide transitional shelters to propel the inhabitants towards empowerment, stability, and hope. This is to give them a roof over their heads while they try to get back on their feet.

With high hopes that the huts will become more accepted, Erik de Buhr said, “I think it’s headed as a Pacific Northwest regional approach to temporary shelters.” Certainly, if more of these huts are built around the country, more people will have a sense of consistency in their lives to keep them grounded and focused. [2]

The “huts for homeless” idea is gaining ground

Eugene, Oregon and Walla Walla, Washington are forerunners in the implementation of “huts for the homeless” with around 70 huts in Eugene and Springfield, and 31 in Walla Walla. Eugene has paved the way for the Conestoga Huts as a city. An overnight camping ordinance was passed by the city council to allow people to sleep in their Conestoga huts, cars, or tents. Up to 20 huts are allowed to be on parking lots, six at a church, and one at a private residence.

Rules and regulations of the huts

For the operation to be managed as smoothly as possible, rules have been laid down.

Three strikes and you’re out

With a 60–70-day waiting list, most people would not want to mess up the opportunity to stay in one of the Conestoga Huts. The rules are strictly adhered to. It takes three written violations of the rules for a resident to be evicted from the site. [3]

Beneficiaries of the program are very appreciative of it

Several former and current residents of the huts can attest to the huts achieving the aim for which they were built. A lot of them have been able to get back on their feet while staying in the huts.

Jocelyn, one of the hut residents, said, “It’s just really warm and awesome and amazing. Most important is that the huts for the homeless provide grounding and consistency. When you have a place to keep your possessions dry and safe instead of hauling them around, then you can start stabilizing your life and figuring out what the next step is.”

Former hut resident Patrick, said, “I had heard about the Huts, had seen them from a distance but I had never been in one. Once I got it, I was like, ‘Wow, this is like a castle.’ It really is. Just to be able to stand up in the morning, simple things like that, it really is a Godsend. As simple as it’s built, I thought, ‘Wow, this could really go a long way to help a lot of people.” [4]

Another former resident, Jeff Howard, who now has an apartment of his own, said, “It was fantastic. It gave me a stable place to operate from.” On what’s next for him, he said, “Who knows? Hopefully, brighter things. Just having a safe secure place is amazing. It’s life-changing.”

There are even Conestoga Hut communities people can apply to live in. In one such community for veterans is resident James Clapp. “I would say this place pretty much saved my life. Where I’m going to go from here? I’m looking for new employment opportunities,” he said. [5]

The idea of having “huts” for homeless people was indeed a brilliant one. It’d be even more fantastic if more people could help out. Maybe by volunteering to build more huts, or donating to the cause. That way, more homeless people can benefit from the program and have the opportunity to work with a little less worry, and hopefully get off the streets permanently.