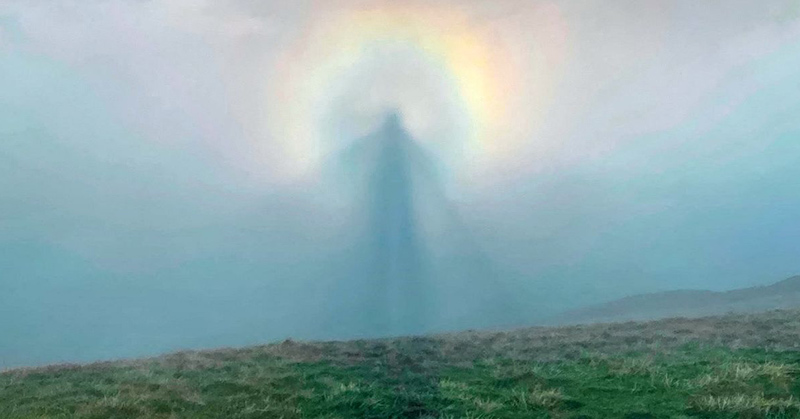 Strange weather occurrences are often talked about, but rarely are they ever captured in a photo. Thankfully with today’s camera technology, a man out hiking was able to get an incredible image of one of these rarely-seen phenomena.

The Angel in the Sky

Lee Howdle was out hiking in the Peak District National Park in Derbyshire, England when he noticed something a peculiar misty shadow. He was quick to pull out his camera and snap the incredible scene.

“My shadow looked huge. It was in this circular rainbow,” he told local news agency SWNS. “I took some photos of it and carried on walking. It was like an angel in the sky over the hills, it was quite magical.”

Also known as the “mountain spectre”, the UK Met Office has named it in their top 10 list of spookiest weather conditions. (1)

The phenomenon is named after the Brocken mountain in northern Germany, where it was first ever recorded to be observed. It occurs when the person who sees it is on a mountain or high ground – above the upper surface of a cloud – with the sun positioned behind them. The light that is reflected back when they see their shadow creates a circular ‘glory’ around the point opposite the sun. (1)

When Howdle saw it, he was standing on Mam Tor, a 1,696-foot hill in the High Peak area of the National Park.

There have been other cases spotted in other parts of the world, as well.

Have you ever seen the eery Brocken Spectre?