$3,000 ‘Jesus Shoes’ With Holy Water in the Soles Sold Out After Just a Few Minutes 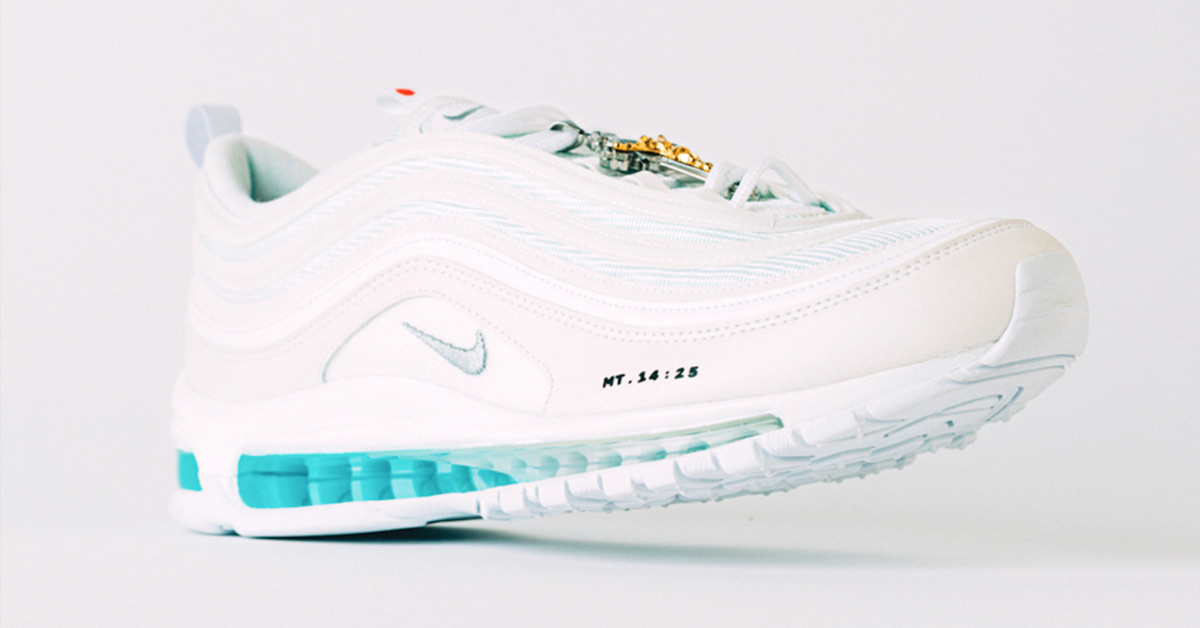 What did Jesus wear when he walked on water? Not these sneakers for sure. However, if you wear them, technically — in the broadest of terms — you’d be ‘walking on water’ too. Design company MSCHF, came up with a fashionable pair of sneakers called “Jesus Shoes.”

The white sneakers were redesigned by MSCHF — a creative label based in Brooklyn, New York. It’s a “counter-culture media/product brand, playing in a gray area that isn’t yet defined by traditional approaches,” said MSCHF’s head of commerce, Daniel Greenberg. [1] The shoe features various bits and pieces related to the biblical story of Jesus Christ walking on water. The ‘parent sneakers’ onto which the designs were placed were from Nike. Nike, however, had no input or involvement in the design. MSCHF claimed to have bought the shoes at the retail price.

Each pair has its soles filled with 60cc of water from the River Jordan that was blessed by a priest, making it Holy Water. The water is dyed blue so it could be seen through the inflated sections of the soles.

In an attempt to replicate The Vatican — with their intricate jewel designs and traditional red shoes — the sneakers come with customized red insoles that have been scented with frankincense (one of the three gifts baby Jesus received from the three wise men.) The shoes also bear a steel crucifix on the shoelaces. It features an all-round, muted, water-themed colorway with red accents.

To make sure that the shoes have more than just a spiritual undertone, they added a ‘single drop of blood’ — a design of course — on the tongue of the shoes to represent the blood of Christ. On the side of the shoes, written in black is “Mt 14:25” — a biblical verse from the book of Matthew that says “shortly before dawn, Jesus went out to them, walking on the lake.”  To round it off, the shoebox features a seal modified from the official Papal Seal, as well as an angel on the box that is excerpted from Albrecht Durer’s 1514 engraving, Melencolia I. [2]

Can these shoes truly save your ‘sole’?

Absolutely! As long as it remains sole and not soul. The shoes, just like any other shoe will indeed protect the sole of your feet, but that’s all it can do. It doesn’t matter that the water came from the River Jordan.

So, why were they created?

The company did not create the shoes to spread spiritualism to the world. Far from that, they can up with the idea to mock the absurdity of society’s “collab culture.” According to Greenberg, the staff was discussing the ridiculous, collaboration idea when they thought, “What would a collab with Jesus Christ look like?” Then they went for it, a collaboration with one of the most influential historical figures. Greenberg also explained that he got the holy water from a friend in Israel. “As a Jew myself, the only thing I know was that he walked on water,” he said. [3]

The company tested fashion practices from past collaborations by attempting to generate interest in their launch through celebrities and social media influencers. They sent six pairs to YouTubers and some other big shots, including rapper A$AP Rocky before the drop. On Tuesday,  October 8th by 11 a.m., they posted the shoes online. Although less than 24 pairs were made, the shoes were sold out within minutes of them dropping. It seems most people want to ‘bless’ their shoe closet with a spiritual and novel design.

MSCHF cited the collaboration between Adidas and Arizona Iced Tea as an example. According to Greenberg, “We wanted to make a statement about how absurd collab culture has gotten.” The collab between a shoe company (Adidas), and a beverage company that sells iced tea at bodegas is certainly weird. [4]

The collaboration between Balenciaga and Crocs gained quite a lot of publicity. In October 2017, the Balenciaga Platform Crocs were unveiled on a runway in Paris. However, they received divided opinions. Balenciaga were criticized for trying too hard, and collaborating for the wrong reasons. Nevertheless, the Balenciaga Crocs became sold out in record time — an amazing accomplishment indeed. [5]

Reception to the Jesus Shoes

As was expected, people haven’t reacted well to them. A twitter user accused the company of “worshipping the devil.” Another asked if the Indian version would have “Gangajal, Gayatri mantra and Om symbol.” Oh, the sarcasm. “I need my shoes secular,” the user added.

While the company is mocking weird collabs, they believe that theirs “was the holiest of all collabs.” [6]

All things considered, the shoes are certainly interesting. They are aesthetically pleasing, and we should at least appreciate the attempt at something different. Nonetheless, you should think twice before taking them out for a walk on a lake.