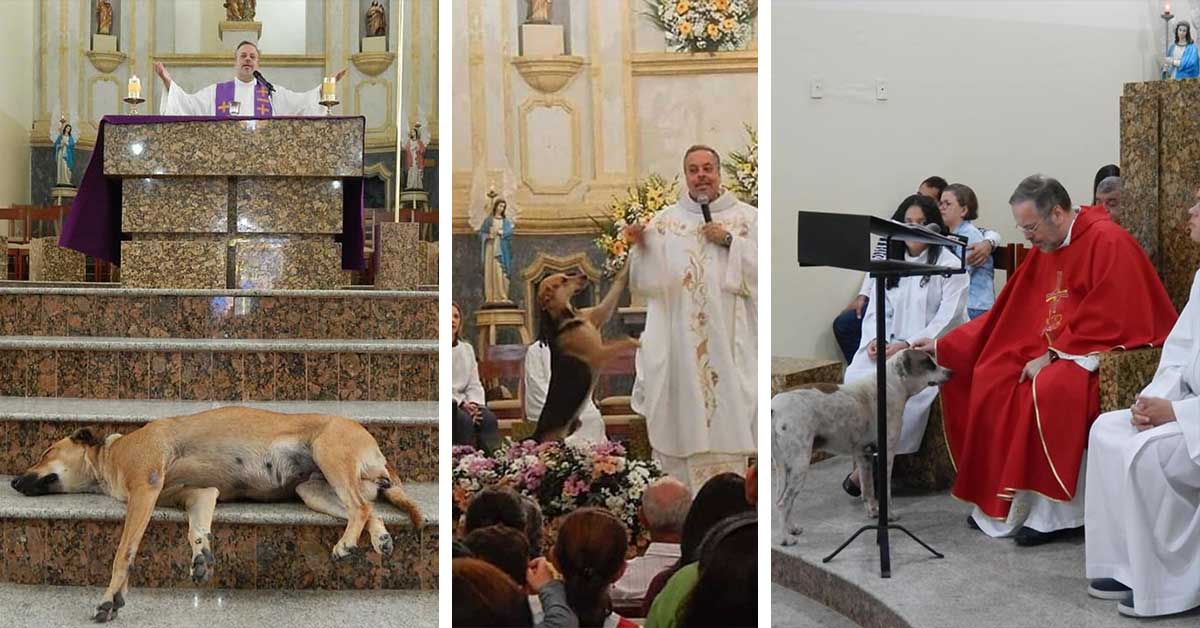 Homeless dogs are a regular sight all over the world. While there are organizations that care for these dogs and put them up for adoption, churches aren’t typically one of them. However, this church in Brazil is home to several stray dogs taken in by the kind priest who hopes they will find a nice family to adopt them.

Father João Paulo Araujo Gomes who is the head of the parish of Sant’Ana Gravatá in Brazil, has a soft spot for dogs. He lets stray dogs into the church to be part of the service. Then he helps them find loving homes. [1]

Dogs have always been man’s best friends, but not many people would pick up stray dogs from the streets and take them home. Nonetheless, who wouldn’t want a dog endorsed by a priest, probably with a glowing recommendation? So far, several dogs have found loving homes through Father João and the number of stray dogs in the city has reduced drastically.

How it all began

Father João came up with the idea to help dogs after he was offered some yummy cookies by a congregant. During Mass, he left the cookies out and they were rapidly taken up by the congregation. Then he came across a dog kennel with 96 dogs and the “cookie incident” gave him a great idea.

He explained it to Metro in an interview. “Then I began to bring the dogs to Mass, with the same hopes of giving them away. In six months, I finished this process. All dogs were adopted. Now I work with street dogs. They sometimes come into the church looking for food and water. During service, we speak about dogs of the street, about how to respect and protect them. The church also helps with a castration project (to limit the number of stray dogs). We also help dogs in emergencies such as victims of violence or health problems.” [2]

It goes beyond weekly Mass

Beyond letting them be part of the weekly Mass, the priest acts as a foster father to the stray dogs and lets them stay in his rectory before Sunday. He has also nursed sick canines back to health. He isn’t alone in his good work; some volunteers help out with the dogs. They helped Father João install feeders outside the church so the dogs always have access to fresh food and water.

He said, “They will always be able to enter, sleep, eat, drink their water and find shelter and protection, for this house is of God and they are of God. If I’m the greatest sinner I can enter — imagine these four-legged angels. Nobody touches my protected.”

On Sundays, the dogs are part of the sermons; sometimes, they even stand with the priest as he preaches. However, most times they lie down in the aisles and take a long, sweet nap. Other times, in typical dog fashion, they seek attention from the priest who never fails to give them belly rubs.

And of course, Father João has adopted some himself. He said, “I helped several dogs with serious health problems. Some of them I brought to the parish house and they were later adopted. Three of them stayed with me. Today, they are my children and sleep in my bed.” [3]

Father João’s good deed hasn’t gone unnoticed. Photos of him conducting Mass with a dog by his side went viral on Facebook. Thousands of people have praised him for his kindness and selflessness. One person even said that helping those who don’t have a voice of their own makes him “a true hero.”

Despite the praise and administration of thousands of people, the priest is very humble and believes he can do more. “What I do is just a drop of water in the face of the magnitude of the problem. I wish I could welcome all the animals, but we work with many limitations. Everything I do depends on volunteers and volunteers who help me, so it’s not my merits but those people’s too.”

Everyone is certainly grateful for the “little” he has done so far.

He has inspired people all over the world to help out homeless animals however they can. Father João advises, “Caring for animals and nature as a whole is a great gesture of love for God, humanity and the planet. We need to develop the perspective of compassion. Too much violence, too much aggression and accusation, diversity becomes the scene of war and struggle, and compassion is the only remedy.” [4]

There is a church in Wisconsin that also welcomes dogs

Wesley United Methodist Church in Sheboygan, Wisconsin, is another church that opens its doors to dogs. Dogs are allowed to “worship” with the parishioners during the nine a.m. service — well, more like lie down and relax than any actual worshipping.

According to Reverend Ann Bullis, they started letting the dogs in after some of the church members made the request. The reverend said the church couldn’t come up with a reason why not to let the dogs in. “Dogs go to heaven. What would (heaven) be without our dogs? Heaven is supposed to be a happy place,” Bullis said. [5]

This trend of welcoming dogs into churches is indeed a welcome one. And as long as they don’t make too much noise and “accidents” don’t happen, maybe it’ll continue and more churches will open their doors to them — or just install some dog doors. That’d certainly make the process easier.