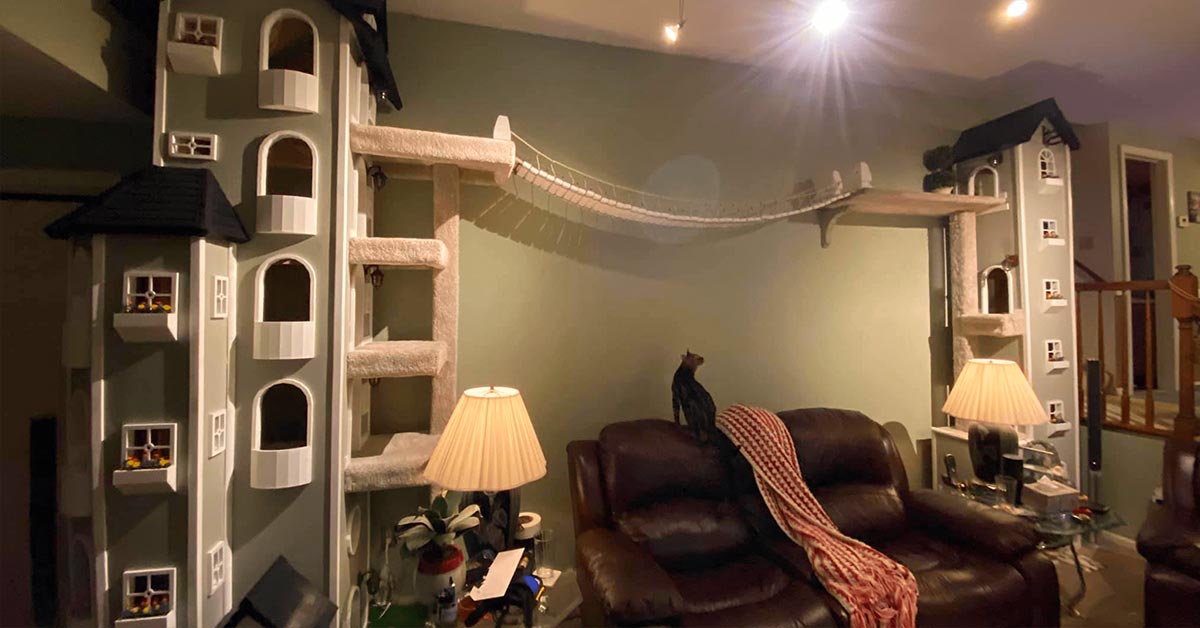 No matter how domesticated your cat is, it’s always going to be a feline. If you’ve ever wondered why your cats can’t seem to stay in the lower half of a room, it’s because their territorial instincts are always active. They climb so much because they love being at high vantage points to survey their territory, especially when there are other animals in the house.

There are lots of cat-climbing toys and furniture out there, but none of them come close to this incredible cat-version of a sky-scraper made by architect Rob Couto. The Connecticut-based BIM manager decided his two pet cats needed enough room to climb to their hearts’ content, and so he designed and built two high-rise towers that brought the cats so much joy and added an aesthetic to his home.

The towers aren’t just randomly joined pieces of wood and clips. They are the perfect tiny versions of real-life six-story towers, complete with balconies, decks, 3D-printed windows, window boxes stuffed with colorful flowers, lovely little lamps, and a sky-high bridge connecting the two bowers. The structures are so huge they stretch from floor to ceiling and provide a haven of comfort and recreation for the lucky pooches. The cats can lounge on the floors and balconies and even poke their heads through the windows to weave from floor to floor. Such pure, feline fun!

How did he come up with the idea?

Speaking to Bored Panda, Rob said he first thought of the design when he saw a realistic tree designed by someone else. [1] He could have just built a tree as well, but he wanted something better for his pets. He began building the towers in May 2019 and has been sharing the details of his work on his Facebook group called Kitty Towers by RACoutu.

“I have two cats, a red tabby and a Savannah cat,” Rob told Bored Panda. Zach, the Savannah is so territorial that he barely lets that tabby get anywhere near the towers.

Rob explains that he’s invested quite a lot into the towers, including $3,500 spent on material and countless hours of detailed work.

“The larger tower was built last and is almost complete,” Rob explained. “It incorporates some design changes based on how the cats interacted with the first one, such as the balconies and the deck landings. The dormer came from Zach, the Savannah, always looking up inside the roof of the other one.”

On his public Facebook group, Rob announced that the responses and reactions have been “humbling” for him, and a lot of people now want the same towers for their pets.

“Because of the demand, I am considering making them for people as a custom install, once I have sorted out all the legal stuff. That said, the price would vary but the larger tower shown on the left would most like start around $5,800 est. plus tax and any extra related fees. I will most likely offer the building plans (price not yet determined), once I can secure a non-piracy secure version to sell. Like I said lots of legal stuff to work through,” he wrote.

Of course, he won’t get started on the towers for sale until the COVID-19 pandemic blows over. While he still has the original blueprint for his pet’s towers, he’s open to creating custom blueprints and builds with additional costs.

Due to the delicacy of the structures, they have a high tendency to collapse if not designed and built right. “Do not take any shortcuts in building or purchasing these when they become available as the safety of the kitties is my foremost focus,” he wrote.