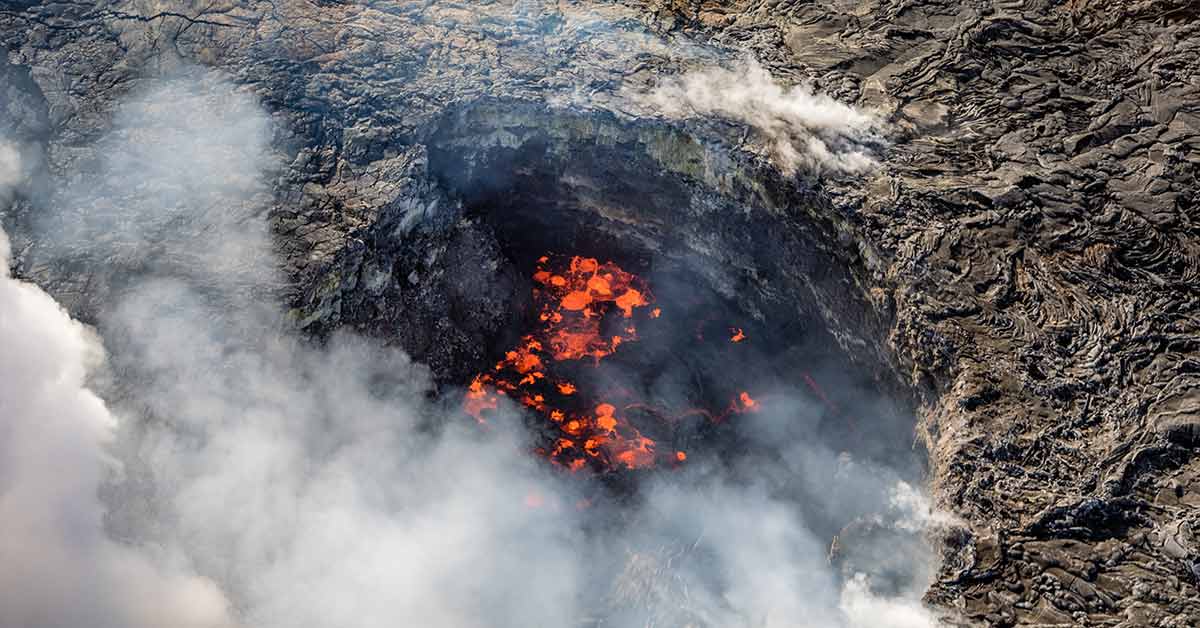 Talk about unfortunate. Falling into a volcano is scary but it’s probably not going to make the top ten list of how most people imagine their deaths. Accidents, diabetes, shark attacks, heck, even being shot by a crazed gun-wielding clown is more likely than plunging into a boiling tub of hot magma. Luckily for this guy, there wasn’t any boiling magma and he survived the fall. Still an unfortunate incident nonetheless.

Hawaii — known for its gorgeous islands, lush flora, tasty food, and surfing — is home to about five active volcanoes. The Kīlauea volcano is the “volcano of interest” in this terrifying tale. It is the youngest active volcano on the island. The Kilauea has a huge summit caldera with a massive crater. Estimated to be between 300,000 and 600,000 years old, the last time it erupted was on May 17, 2018. [1] Explosive activities continued over three months. The eruptions spewed ash, gas, and lava into the air. About 320,000 swimming pools’ worth of lava was spewed across 13.7 square meters of the island. The horrible event was responsible for the destruction of around 700 Hawaiian homes. The Kīlauea ranks among the world’s most active volcanoes, and the threat’s potential is ranked as “very high.” [2]

There’s a reason safety rails were put up there

Conditions at the volcano are quite precarious, the grounds are unsteady and without safety rails, people would fall off the cliff all the time. On Wednesday, 1st May, 2019, a man climbed over the metal guardrail to get closer to the cliff’s edge at the Steaming Bluff overlook. Oh boy, did he get his close view. The ground beneath him gave way and he fell.

According to the official statement released by the Hawaii Volcanoes National Park, the incident occurred at about 6:30 p.m. He fell off a cliff at the volcano’s caldera — a 300-foot cliff. Luckily, he only fell 70ft down. Almost three hours later, he was discovered down the cliff’s edge. He was alive but severely injured. [3]

The statement read: “The man had just climbed over a permanent metal railing at the Steaming Bluff overlook to get closer to the cliff edge.” On the rescue, they said, “Rescue personnel successfully completed a high angle extrication using ropes and stokes litter and, with support from the Department of Defense Helicopter, the man was airlifted to Hilo Medical Center for urgent care.” [4]

Update on the man

While the victim’s name is withheld, it is known that he is a 38-year-old Schofield Barracks soldier. He was on the island on a training mission at Pohakuloa with his unit. Matthias Kusch, Hawaii County Fire Department Battalion Chief said, “He obviously is doing remarkably well for his fall. Only time will tell what injuries he has.” [5]

It is amazing he survived. It could have been much worse; imagine if he didn’t fall 70ft, but instead the entire 300ft down into the abyss that is the caldera. Indeed, curiosity killed the cat, but satisfaction brought it back.  His story, however, is unique. Others have not been so lucky; there have been recorded deaths in that volcano.

Warnings by the park

There have been several warnings issued to park visitors. After the fall in May, Chief Ranger John Broward, issued another warning to the public. He said, “Visitors should never cross safety barriers, especially around dangerous and destabilized cliff edges. Crossing safety barriers and entering closed areas can result in serious injuries and death.”

Tragic outcomes from falling into the caldera

On July 10, 2017, a man was found dead almost at the bottom of the Kīlauea’s caldera. This has been ruled as a suicide since park officials found a note in his backpack. The man, 38-year-old Gregory Michael Ure, also known as Leo Michael Adonis, had “some emotional issues the last four to five years, and we’d been quite worried about it,” said his father, John Michael Ure, in an interview with the Hawaii Tribune-Herald. John Michael plans to cremate his son and spread the ashes around Hawaii, which he loved. [6]

Spokeswoman for the park, Jessica Ferracane, said that such incidents are rare and that the last fall was in 2001. She said Michael’s case is under investigation.

On the 29th of October in 2017, a 63-year-old woman was found dead in the Kīlauea caldera. Her body was recovered by the park rangers below the Steaming Bluff. She fell 250ft below the caldera’s rim. [7]

According to the New York Daily News, since 1990, five other visitors have died in areas marked off-limits in Volcanoes National Park.

These falls into volcanoes are terrifying, and the deaths are, simply put, tragic. Those guardrails are not for decoration. No one should ever climb over them, especially not to get a good look. It’s like they say: be careful what you wish for, because you might just get it. Plunging 300ft or more into a volcano gets you a closer look; however, getting out alive is a different ballgame.

Thankfully, most people adhere to the rules of whatever place they visit for tourism.