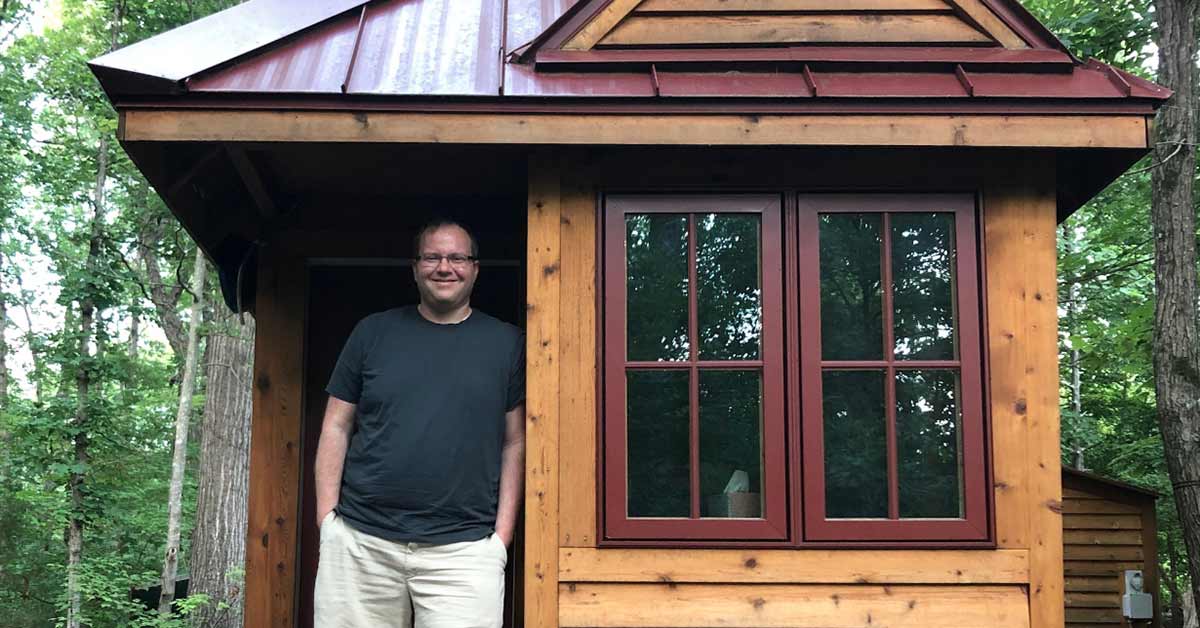 Adversity comes in all shapes and sizes; however, it is our ability to overcome the stumbling blocks that come our way that makes us unique. After losing his job barely six months out of grad school, Ryan Mitchell was inspired to build a new life — in a tiny house.

As real estate prices continue to rise around the world, more and more people are looking for alternative ways to survive on limited resources even as they put down roots. One of the most common alternatives to traditional homes is the tiny house, and the tiny house movement is a real thing! You may have heard about tiny houses if you’re a fan of HGTV or any other home renovation program.

And the idea seems to be catching on. According to a survey by the National Association of Home Builders, more than 50% of Americans would consider living in a home that’s less than 600 square feet, and this interest increases to 63% among millennials. These results show that a majority of adults are willing to consider living in a tiny home now, or at some point in the future.[2]

Many experts believe that tiny homes may be an inevitable part of our future real estate. To prepare for this change in the way we live, many renowned architects have begun designing tiny homes, including contemporary architecture group, Klein. Even retail giant Amazon has started offering prefabricated small homes and containers on their website.

For tiny home owner, Ryan Mitchell, the move has certainly been a profitable one. The 35-years-old reports that he has been able to pay off all his student loans, start a successful business, travel the world (including Germany and the UK), and save more than $100,000 in the seven years since he began living in his tiny 150-square-foot home.

“It’s hard for me to put into words, the impact is so profound,” Mitchell tells reporters. “I attribute me living in a tiny house to me having a higher quality of life. It helped me to be more open to opportunities.”[3]

Mitchell’s story started in 2009; he had just graduated with a master’s degree in human resources from Western Carolina University and was barely six months into what he terms his “first adult job,” when he suddenly found himself unemployed.

“My boss came in and said, ‘We’re closing the company. You’re all out of a job.’”

He remembered feeling lost and hopeless about his immediate future. He decided to take a serious look at his living expenses to find out how he was going to get by.

“I realized half my income was going to rent, insurance, and maintenance, and I said, I don’t know how I’m going to do it, but if I could eliminate housing from my budget, it would set me up to be in a better position.”[3]

This motivated him to search for suitable alternatives to his living conditions at the time.

Remember that this was back in 2009 and tiny houses weren’t nearly as famous as they are today. Mitchell first discovered the tiny house movement after seeing a picture of a friend’s small house online, and this idea intrigued him. He created a blog, The Tiny Life, to document his journey into tiny living.

The journey took approximately two years as he decided to build a house of his own design. When he started the project, Mitchell had no design or construction experience to speak of. He relied solely on books and online resources, plus design plans someone else had posted on the internet. He also had a full-time job and was forced to build his dream home on the weekends while he continued to live in his South Park apartment with a roommate.[4]

The entire project took a year and a half to complete and cost approximately $30,000. This includes all the materials for the house and the solar panels to power it. However, Mitchell wasn’t without doubts of the project’s success.

“I was nervous that living in this tiny house wouldn’t work, that it wouldn’t be for me, but I told myself I only had to do it for two years to get to the break-even point.”

However, he was convinced that he had made the right choice when it was time to move into his new home.

“I realized I had boxes from when I’d moved in there [SouthPark apartment] that I’d never opened. I hadn’t needed whatever was in them for years. That opened my eyes to the role stuff played in my life.”[3]

So, what do you think? Is a tiny house something you would like to try living in in future?