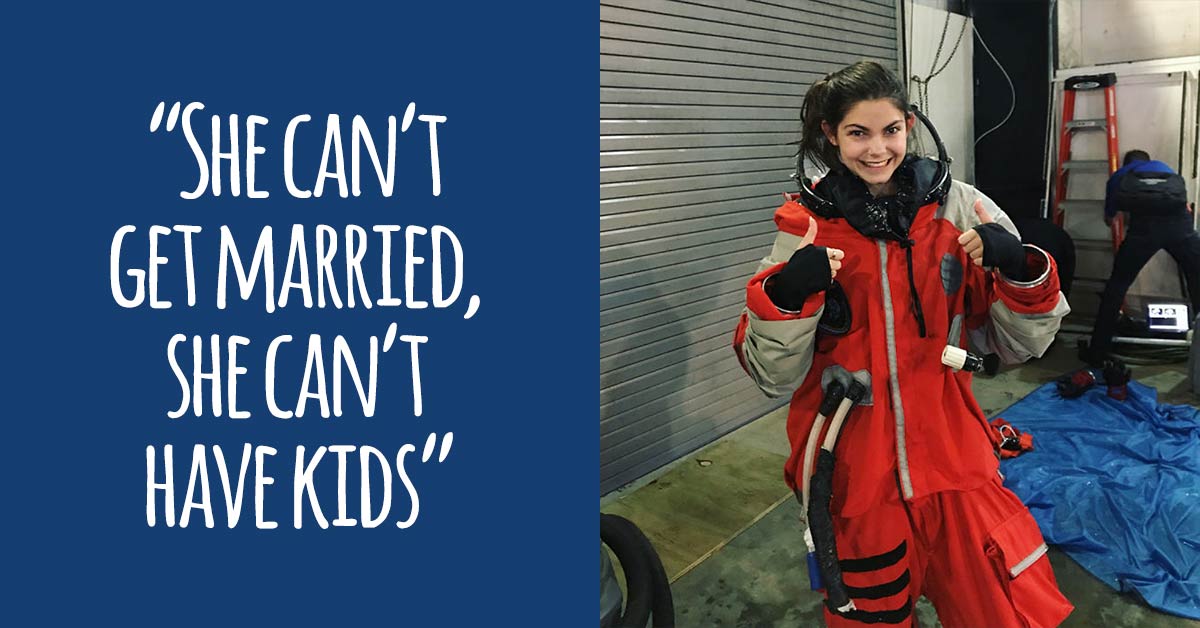 With three TEDx talks under her belt, 19 space camps, and 14 visits to all NASA centers nationwide, Alyssa Carson from Baton Rouge, Louisiana, is not your regular 18-year-old. [1] She’s all about achieving her dream and has created no room for backing down. She’s currently the world’s youngest-astronaut-in-training and is being groomed to explore Mars in 2033. When Alyssa was three, she watched an episode of The Backyardigans, a cartoon about five animal friends who had wild imaginations and went on the craziest adventures.

“They had an episode called ‘Mission to Mars’ and were asking questions about space, about Mars, if people are already on Mars,” she said in her first TEDx talk. “My dad remembers me coming and asking him questions about space and Mars. He told me a little about the moon landings and it sparked an interest.”

From that moment, she became hooked on space travel and Mars exploration. While most people would write it off as childish imaginations, Alyssa’s dad was determined to support his daughter as much as he could. He took her to her first space camp at the age of seven and so far, she’s been to 19 camps all over the world. When she was 12, she was invited to a Mars exploration discussion at NASA in Washington D.C.

“Space camp was the best opportunity for me to learn more about space and to get more involved in it,” she says. “I got to ride simulators, do simulated missions, build model rockets, and learn robotics and aviation.”

In 2014, when Alyssa was 13 years old, she delivered her first TEDx talk in Kalamata, Greece. [2] She became an ambassador from Mars One in 2013, aiming to be a part of the first exploration team in 2033. Alyssa was 15 when she was accepted in the Advanced PoSSUM Space Academy. She later received a certification in applied astronautics which will enable her to conduct extensive research on suborbital space travel. She also became certified to travel to space upon completion of her astronaut training.

Alyssa is a young woman who grew into her dream and for her, it’s a reality waiting to happen.

She was the first person to complete the NASA Passport Program by visiting all 14 NASA centers across nine states. She achieved this feat only four months after the program started.

Horizn Studios is a German brand that manufactures smart luggage and premium travel accessories. The company owns Horizon One, the world’s first space travel luggage. For her extensive knowledge of space travel, Alyssa was invited to be a part of the design and prototype team.

“They know luggage and I know space, so it was a match made in heaven when talking about the future and space tourism,” she said. “It’s the ultimate futuristic luggage — geared toward space tourism and commercial space flights once we start bringing the general public into space.”

The Horizn One is an incredible piece of scientific art, featuring a graphene-enhanced carbon-fiber structure that makes it extremely lightweight, graphene supercapacitors that allow wireless charging of devices, a built-in smart screen to allow space travelers to communicate with their loved ones at home, biometric fingerprint security, and a host of other mind-blowing features.

Horizn One will be out in 2030, three years before the first Mars One exploration. The company plans to retail it at $50,000, which means that only the extremely rich can afford the sleek beauty.

In 2017, Alyssa said that her biggest challenge was having to combine high school with her astronaut training. [3] She was taking all her classes in four different languages (English, Chinese, French, and Spanish) and was working very hard to stay on track.

“The biggest [challenge] is time and getting everything done at such a young age while also still attending high school,” she said. “Continuing to train at a young age will also be further difficulties for me, but I have done great with it so far.”

She graduated high school in May this year and is currently studying astrobiology at Florida Tech, while still making waves in her astronaut training.

Alyssa knows that to achieve her dream of space exploration, she wouldn’t be able to get married or have kids, but she’s willing to give up family life to follow her passion.

Alyssa owns the Blueberry Foundation, named after her NASA call sign, Blueberry. She aims to inspire kids to fulfill their dreams no matter how impossible they may seem. According to the foundation’s motto, “We are the Mars Generation.”

Alyssa is a role model for millions of children all over the world and her life is just getting started. We wish her the best of luck as she journeys on to great things and incredible adventures.