Michael Buble’s Duet With His “Voice Crush” Is Simply Incredible 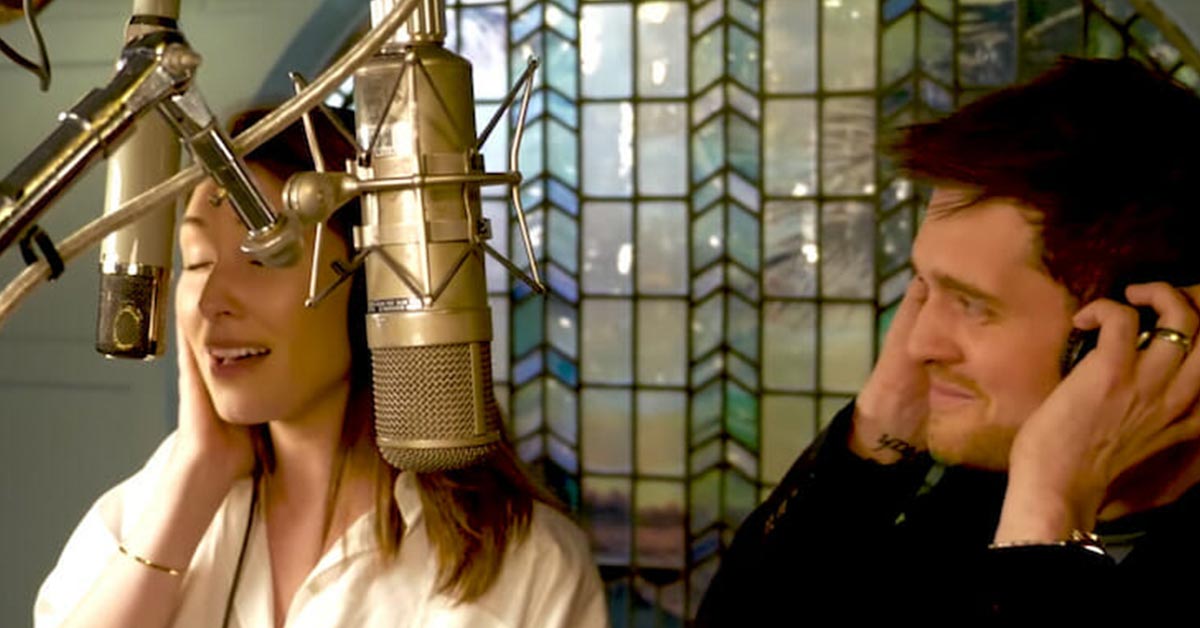 Michael Buble can be rightly described as having the voice of an angel, not to mention an incredibly charming personality. He sounds amazing when he sings solo, and when he teams up with other singers. Needless to say, Buble has given us some incredible duets in the past. However, his duet with this artist, who sang in a top movie musical, was off the charts.

Michael Steven Buble is a Canadian-Italian singer, songwriter, actor, and record producer. He is a jack of all trades and appears to be a master of most — if not all. His very first album was among the top ten in Canada and the UK. In an interview with Oprah Winfrey in 2009, Buble said he has dreamt of being a famous singer ever since he was a little boy. As a testament to his talent, he won the ‘New Artist Of The Year’ Award at the 2004 Juno Awards. He has also won several Grammy awards and has been nominated multiple times for other awards. [1]

Buble’s duets with other singers

Buble has teamed up with several singers and celebrities over the years to serenade us with fantastic music. Some of these singers and stars include Mariah Carey, Barbra Streisand, Blake Shelton, Jennifer Hudson, Kelly Rowland, Laura Pausini, Tony Bennett, and Jane Monheit. Despite his great success with so many talented singers, Buble knew he was in a pickle when it was time to choose a partner to sing the popular song, “Help Me Make It Through The Night.”

Buble has been referred to as a poor man’s Sinatra, but he believes certain songs are called ‘classics’ because they never go out of style and the romance never dies. [2] While some songs are regarded as iconic, “Help Me Make It Through The Night” is on a whole other level. You can’t hear it without wanting to sing along. That is precisely why Buble had to make his rendition a masterpiece. And a masterpiece he did make with this incredible singer: Loren Allred.

Who is Loren Allred?

Loren is an American singer, songwriter, and pianist. She was a contestant on season three of The Voice in 2012 with Adam Levine as her coach. However, she was eliminated after the first week of the live playlists. She kept working hard on her career and was cast as the singing voice of Rebecca Ferguson’s Jenny Lind in The Greatest Showman. That was a real shining moment for her and opened up so many opportunities. [3]

When the movie was released, her song became the number one viral song on Spotify in the USA and worldwide. It was through that movie Buble discovered her. Of course, she did not appear as an actress in the movie so Buble did a little ‘CIA’ work until he found out she was the artist behind the movie’s hit song “Never Enough.” He reached out to her and she joined him in a duet rendition of “Help Me Make It Through The Night,” which was originally written and recorded by Kris Kristofferson in 1970. [4] More than just agreeing to make the duet, Allred was thrilled to sing alongside one of her faves.

Buble refers to her as his “voice crush”

What are the odds that the singer he chose would be one who’d compliment him so much, whose voice would match his perfectly, hit any note right, and give the duet a top-notch quality? “My concept had always been so strong, and in my head, it had always been a duet. I had always seen it as this incredibly sad but beautiful story of two needy people that just did not have the strength to be alone anymore,” said Buble. [5]

While watching The Greatest Showman, he was impressed with a particular performance that caught his eye. “There was this song called ‘Never Enough,’” he said. “There’s this beautiful scene in the theatre where she’s just singing this gorgeous song, and I realized the actress — it wasn’t her singing. So, I frantically started to go to YouTube to find out who this was. Sure enough, I found Loren Allred,” he said.

He reached out to Allred and invited her to come on board. “I had a serious voice crush,” he admitted. “She walked in, and she was more than I’d ever hoped for.”

Allred on her part said, “It was the chance of a lifetime; I was thrilled to be part of it.” [6]

Amazing, incredible, tremendous, touching, and magical are some of the words you can use to describe the duo’s version of the song. It’s undeniable that they each bring magic to the table, but together, they create magic. Since it was released, the video has been viewed over a million times.

Some of the comments on the video read, “I had to look her up also. Her voice is just BEAUTIFUL.”

“Michael and Loren Allred sounded so magical together.”

“That was absolutely beautiful. Of course, MB was velvety… but Loren was superb!”

In 2016, Buble’s son Noah was diagnosed with liver cancer. It was a tragic time for his family. Buble said, “You know what? Hell seems like a really nice place to vacation compared to where we’ve been.” [7]

Buble took a step back from music, and his wife, Luisana Lopilato, also put her career on hold so they could focus on their family. Thankfully, after a difficult battle, Noah is now fully in remission, and after a two-year break from the music scene, Buble is back to work. [8] The boy is doing very well now, and Buble and his wife just had a daughter.

The illness changed Buble’s perspective on life. “You learn a lot about life and what’s important and what matters, and you stop sweating the small stuff because you realize that most of the stuff is the small stuff… I did what I had to do and put my family first and do what anybody would have to do, but God, I remembered why I loved making the music…” It’s so nice to see the family so happy and know they are doing alright; they deserve happiness after what they went through.

Hearing Buble and Loren sing is sure to hit you right in the feels. The video they uploaded includes a behind-the-scenes clip that everyone is grateful for. Watch the video to see just how in-tune with each other they are, and to understand why everyone believes they are a musical match made in heaven.