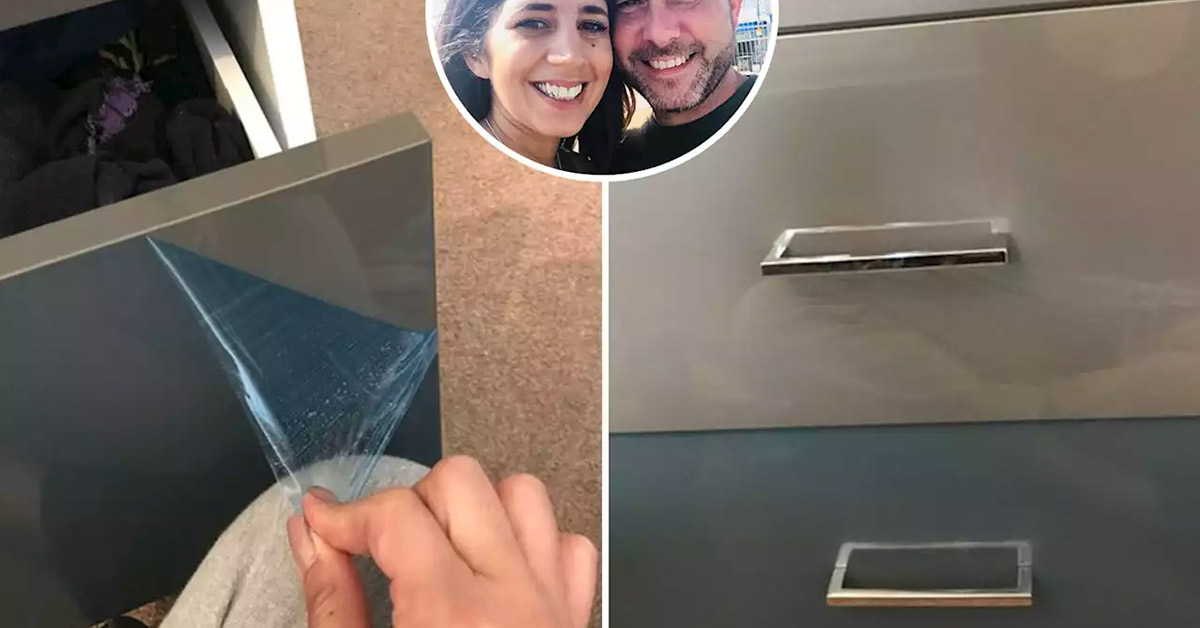 On one hand, this English woman feels ecstatic about a piece of furniture that feels like new, and on the other, she does find the situation a bit embarrassing.

Thirty-five-year-old Kayleigh Greer from Stevenage, Hertfordshire, bought a blue set of B&Q drawers three years ago. The purchase came with so much buyer’s remorse. Her bedroom had a gray and silver theme, so she wanted a gray cabinet to match the décor. Kayleigh, who works as a national sales manager, said the intended use for the cabinet was a pseudo TV stand. Unfortunately, she could only find the cabinet she wanted in blue. She purchased it as she figured it was at least close to the color scheme.

Three years later, Kayleigh makes a shocking discovery. While she had always known there was white tape along the top of each drawer, she misunderstood the purpose for it. She assumed it was simply a protective film that would eventually have to be removed.

Oh, how wrong she was, because the cabinet turned out to be gray. This she discovered accidentally whilst deep cleaning the room on one occasion. Apparently, the ‘blue color’ was just a film intended to protect the actual cabinet from scratches and such while in stores or transit. It was supposed to be peeled off when set up. Well, Kayleigh didn’t know that.

Her first reaction when the film came off was to panic. She thought she’d ruined the unit. But, she kept on peeling until it was entirely free of the blue film.

She looked on in awe at how amazing the cabinet looked and how it matched the color scheme perfectly. [1]

Kayleigh rushed down to her husband Darren to share the funny story with him. Darren, who was watching their three kids, 8-year-old Taylor, 17-month-old Greyson, and 16-week-old Felix, was just as shocked as she was. [2]

“Darren was downstairs with the kids and I came down with all this blue film scrunched up in my arms,” said Kayleigh.

Darren on his part could only burst into hysterical laughter after Kayleigh told him the source of the material. He then rushed upstairs because, well, he just had to see for himself.

Kayleigh said, “He thinks it’s amazing. He prefers the cabinet now to before.” [3]

Although I have not had that experience, I can certainly understand how it could have happened to her. Nowadays, it’s hard to understand the complicated packaging instructions on some products you purchase.

Kayleigh said she’d even asked the store if they had any color other than blue but they said no. So, they too were “fooled.”

Similar situation? Not quite

Now, who doesn’t love a good story of rags to riches?

While Kayleigh’s case is not so over the top, there have been some very crazy tales that the word “serendipitous” can barely do justice to.

One such case happened about five years ago in Shenandoah Valley, Virginia. The lady who wishes to be known as ‘Renoir Girl’ bought a $6.90 box of trinkets at a flea market in West Virginia. She wanted to use just the golden frame and throw away the rest of the contents but her mom advised her against that.

Years later, an original painting by French impressionist Pierre – Auguste Renoir valued between $75,000 and $100,000 was discovered in that very frame. [4]

Maybe Kayleigh should search the cabinet carefully; who knows what treasures lie hidden within it? Other than plain old blue paper of course.

Instead of feeling silly, Kayleigh feels very much happy — both with the cabinet and the whole situation. While she had spent £150 on the cabinet originally, she feels this is like a new buy.

“It’s like we’ve got a brand new piece of furniture and we haven’t spent a penny,” said Kayleigh.

That’s the spirit! It’s always a good idea not to take things so seriously. Kayleigh’s friends probably had a good laugh when she told them about it. One can only imagine all the jokes they’ll make about it this year. Oh well, I suggest you go and check all the things in your house that you purchased within the past few years. You might be lucky enough to find something worth a few good laughs.