Mom Goes Native: Hunts and Kills for Food Carrying Her Baby on Her Back and Says She Won’t Stop 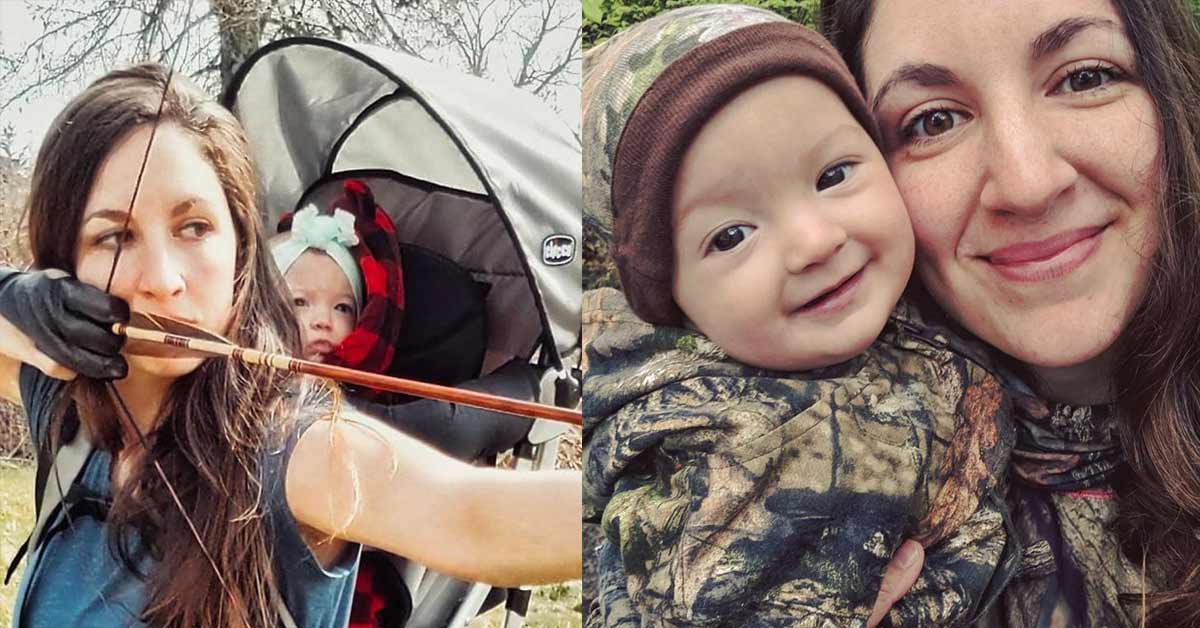 Old habits die hard. This is why children are taught to develop useful skills and behaviors from a very young age. However, we sometimes pick up things in our youth that may be considered strange or unusual, and these may become difficult to unlearn.

A 30-year-old stay-at-home mom in Ohio has been thrust into the limelight after revealing that she frequently takes her nine-month-old baby with her on hunting trips. When we say hunting, we mean heading out into the woods with a bow, a quiver of arrows, camo gear, and a baby strapped to her back.

Rebekah Stephens first fell in love with hunting when she was seven years old after joining her father on a hunting trip along with her siblings. Her family survived on her father’s hunting successes, and her passion for hunting has only grown over the years.

She took to the sport like a charm and continued to actively hunt deer, turkeys, rabbits, and even a 200+ pound whitetail deer — her most significant kill to date. Rebekah believes that girls could have fun hunting too and is grateful that her father introduced her to hunting at such an early age

“As a kid, I knew it simply as a way of putting food on the table,” she said. “We didn’t buy beef, we always had deer meat. As I got older, I saw it as a way to escape the outside world and relax.”

Starting on the hunting trail early

Isabella, her ten-month-old daughter, began the family tradition earlier. Her first hunt — for wild turkey — occurred when she was eight months old and she performed beautifully “and was very quiet the whole time, for five hours.” [1]

Rebekah gave birth in August 2018 but didn’t allow her motherhood to stop her from partaking in her favorite pastime. Instead, she found a way to balance both her new role as a mom and her love for hunting by taking Isabella with her on hunting trips.

She keeps Isabella strapped firmly to her back, or front, while she shoots and kills animals for her family. To minimize the risk of accidents happening, Rebekah carries a bow and arrow for hunting rather than a traditional hunting rifle.

To avoid waste, Rebekah says she tries to use as much of the animals she kills as possible. What she doesn’t use as food for her family, she uses for home décor, protection, or clothing.

However, as with a lot of things that don’t conform to society’s ideal of what is normal, her actions have attracted a lot of negativity, which she ignores. She has received lots of messages from those opposed to hunting as a whole.

“I get quite a few anti-hunters saying things like, ‘How would you like it if someone hunted you and your baby?’ and other things along the lines of, ‘How can you teach an innocent baby such horrible things like hunting?’” Rebekah said. [2]

However, it hasn’t been all bad; Rebekah has also received responses from people who love the fact that she’s close to her child.

“Hands down, the best comment was from someone who lets me hunt in their property,” she said. “He said that he thought it was great I was getting my daughter involved in the outdoors at such a young age and that it was great that I hadn’t stopped doing what I was passionate about just because I had a child.

“There is always much respect in taking a life. If you haven’t been in my shoes and lived this lifestyle, you really can’t judge what is best.“