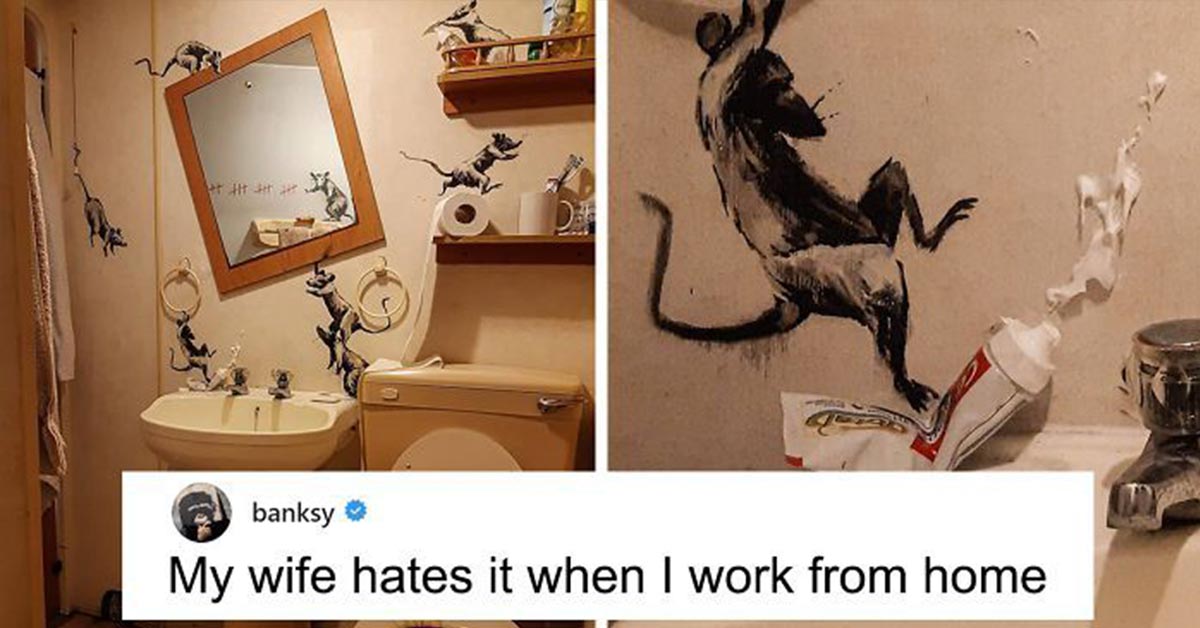 On a normal day, when at least a third of the world isn’t locked down in a pandemic crisis, the guy sitting across from you at a coffee store could just be the famous (and notorious) Banksy. Perhaps, he could be the delivery man who brings in your package from Amazon Mail or even the real Prince Harry, Duke of Sussex (probably not). No one really knows the identity of the anonymous British street artist, but right now, we are certain of one thing: Banksy is stuck at home like everyone else and is driving his wife nuts.

Since there are no more street walls, concrete surfaces, and open-air canvases to do his graffiti, the street vandal and activist has taken to the walls in his bathroom at home, and the result is hilarious and awe-inspiring. [1] He took to Instagram on Wednesday to share the photos of his recent exploits with his 8.2 million followers, and as always, people are stunned by his incredible skills.

Banksy tweaked tangible bathroom items into carefully thought-out positions and sketched nine of his infamous wild rats to fit perfectly into the scene – creating the worst possible bathroom mess anyone could ever encounter.

One rat was taking a leak into the toilet, standing on the seat and making a horrible brown mess down the cover and into the bowl (probably caramel). The one in the mirror had used red lipstick to make tally marks on the wall. Another was running over toilet paper and the roll was all over the place. One rat stood on another to tip over the mirror, and the funniest rat hung himself up to step on toothpaste, causing it to splatter on the wall.

Banksy has continued to prove, time and again, how creative and innovative the human mind can be. With no bias from my status as a loyal Banksy fan, I rate this piece a solid 10/10.

A little about the infamous wild card

For the 32 years he has thrilled people as a street artist, Banksy has chosen to stay anonymous because graffiti is illegal. The little that’s known about him came from his 2003 interview with Simon Hattenstone of The Guardian, where the reported described him as “white, 28, scruffy casual—jeans, T-shirt, a silver tooth, silver chain, and silver earring. He looks like a cross between Jimmy Nail and Mike Skinner of the Streets.” [2]

Banksy, whose real name is believed to be Robin Gunningham, was born in Bristol, the United Kingdom in 1973. He moved to London in 2003 and has continued to be the king vandal that I’m not sure anyone really wants to arrest. In 2006, he married Joy Millward, an equally secretive parliamentary lobbyist.

Lots of phony rip-offs have come forward over the decades claiming to be Banksy. News (and a photo of an innocent man) broke out in 2008 and was even carried by some of the most reliable sources that Banksy’s identity had been revealed. However, despite the intense speculation, Banksy’s identity remains unknown as the rumors were contested, discredited, and eventually debunked.

Actually, true Banksy fans wouldn’t want to know who he is. The anonymity is part of what makes him so… Banksy.

He is one of the highest-paid artists in the world, with an estimated net worth of $20 million. His most expensive work to date is the Devolved Parliament, a gigantic painting of a crowded parliament of chimpanzees that sold for a stunning $12 million.