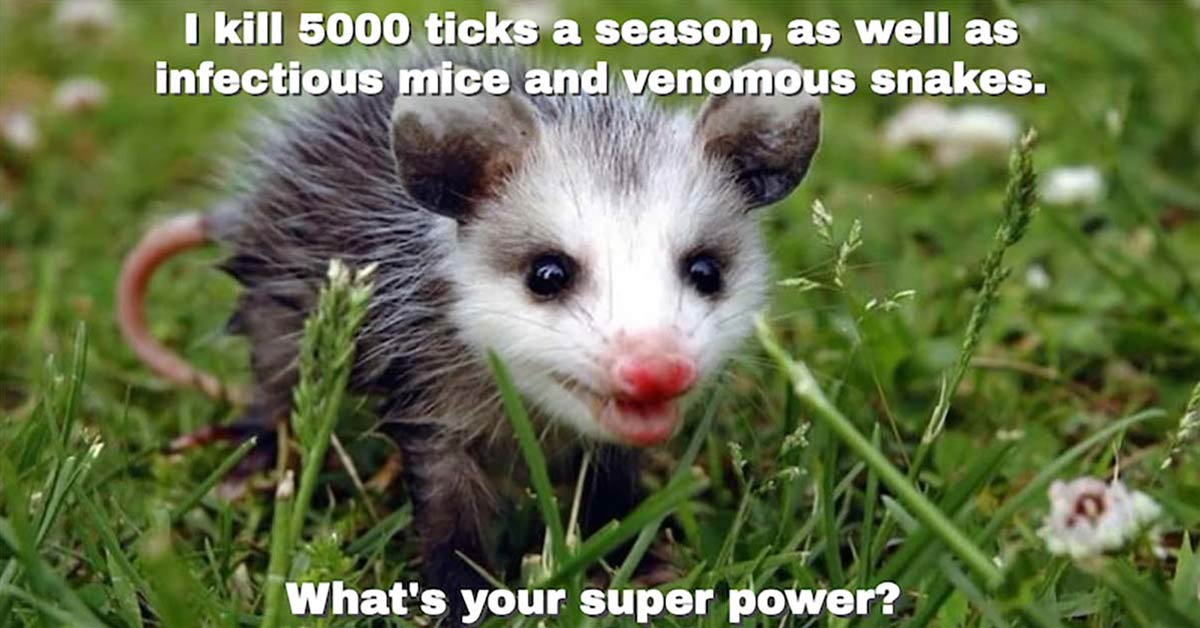 Let’s face it! Opossums can be annoying and downright disgusting. While some people may find them cute, others are repelled by their mere sight. Whatever category you fall in, you will be surprised to hear that opossums are not as useless as we thought. Contrary to popular belief, opossums are beneficial. Yes, you read right! And there’s science to back it up.

In a study published in the Proceedings of the Royal Society B, researchers found that opossums could consume up to 5,500 ticks in a season. Additionally, among all the six tick-eating animals tested, none could consume ticks the way opossums do.

“So, the opossum wanders through the woods, and ticks get on them just like they might get on any mammal wandering through the woods,” said Felicia Keesing, a biologist at Bard College and an Adjunct Scientist at the Cary Institute of Ecosystem Studies. “But the opossums groom them off and kill them in the process of the tick wandering around trying to find a place to feed. And so, if an opossum got a hundred ticks on it, say, about ninety-six of those would get killed in the process of trying to find a place to feed on that opossum.”  [1]

The reason why opossums consume so many ticks isn’t far-fetched. Professor of Biology, Felicia Keesing, Ph.D., suggests that the skin sensitivity of opossums plays a vital role. Unlike some other animals, opossums are capable of detecting the presence of tiny fibers and even cobwebs. They are also sensitive to the presence of ticks on their skin and can easily detect their location for easy removal.

Interestingly, ticks that manage to feed on opossums successfully are at a lower risk of picking up the bacteria that causes Lyme disease.

Why this discovery is important

Due to the ever-changing climatic conditions, tick population along with the diseases they carry are spreading rapidly. These diseases (which include Lyme Disease ) are very difficult to treat. Since opossums consume so many ticks, allowing them into your garden could curtail the spread of these devastating illnesses that tick carry.

In addition to keeping the tick’s population under control, opossums provide other benefits to your environment. By eating pests like rats, mice, and cockroaches, which are also carriers of infectious disease, opossums will keep your garden free from unwanted pests. [2]

What you do when you come across opossums in your garden

If you come across these foragers in your garden, DFW Coalition suggests leaving them alone. While you may be tempted to attack them, do not. Research has proven that they are quite beneficial to the ecosystem. Furthermore, opossums do not attack pets or other wildlife. If you can’t stand their presence, prod gently, and they will move along. [3]

“When left alone, the opossum does not attack pets or other wildlife; he does not chew your telephone or electric wires, spread disease, dig up your flower bulbs or turn over your trash cans,” writes Texas’s DFW Wildlife Coalition. “On the contrary, the opossum does a great service in insect, venomous snake, and rodent control. He takes as his pay only what he eats, and maybe a dry place to sleep.”

The opossum is a marsupial of the order Didelphimorphia that is comprised of about 103 species. They are found in North and South America. Opossums are food swimmers and agile climbers. They rely on their prehensile tail for stabilization when walking on tree branches. Typically, an adult opossum measures approximately 2–3 feet in length and weighs between 4–11 pounds. They feed on grains, fruit, frogs, birds, mice, dead animals, eggs, nuts, and snakes. [4]

When harmed or frightened, opossums will freeze and be as still as death. But this is an involuntary response and their body’s way of protecting them from predators. If left unharmed, they will recover in approximately 3 hours.