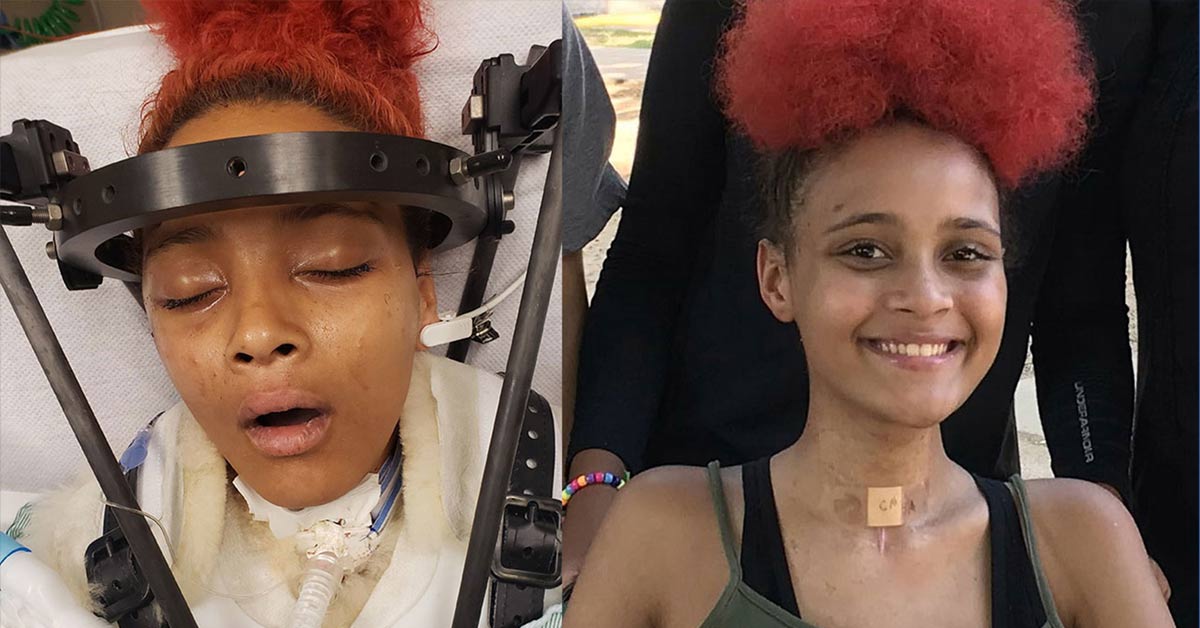 It is always comforting to be reminded that despite all the bad news we are bombarded with every day, some miracles do happen. In a way, it makes life worth living and reinforces our faith in those around us.

Our ability to succeed stems not from luck or goodwill from others but rather from our ability to continue fighting despite the cards we are dealt. This was the case of a teenage girl who was left paralyzed after a major accident just a few months ago.

Although she was told she may not survive, she fought to defy the odds and has begun walking again. Just two months ago, Lacy Johnson, 17, from Houston, Texas, was barely clinging to life and bleeding internally after being involved in a horrible car accident.

It all started on June 7 when Lacy was in a car with her best friend and her best friend’s mother who was driving. The mother had been diagnosed with epilepsy and began having a seizure behind the wheel. This caused the vehicle to lose control and move erratically on the highway. [1]

The 17-year-old unbuckled her seat belt to help but was ejected when the car crashed and rolled over. Johnson was immediately rushed to the hospital where a scan found that she had sustained severe injuries.

The entire left side of her body was paralyzed, and she was unable to speak or move her neck muscles. Due to the severity of her injuries, she stopped breathing numerous times and had to be put on support. The situation was so dire that her doctors told her family that she might not survive the ordeal.

“I got cut from the glass,” said Johnson in an interview. “My back broke in four places; my skull detached from my spine; I had a collapsed lung.“

The Fighting Spirit Fears No Setbacks

Even though she woke up not remembering the accident — the black Kia Optima she was in, hitting a curb before hitting another car, causing it to roll over — Johnson was determined to fight for her life and walk again.

Eventually, she was released from the trauma center to TIRR Memorial Hermann, where she was to start rehabilitation. At this point, she was unable to talk or walk. The family was briefed on what her therapy plan was, and Johnson was determined to walk again. She did whatever the therapist instructed her to do and more.

“When I got here, I kept telling them I’m walking out of here,” she said.

Her family created a GoFundMe page to help with her hospital bills and renovations on her home to make it handicap-accessible. Her house is an older one, and a lot of work had to be done to make it suitable for her new condition. Doors had to be reframed, new doorways had to be added, and old walls, floors, and more had to be rebuilt due to dry rot. [3]

A Better Outlook to the Future

But it was all worth it as she has slowly recovered and is finally walking again. She also regained the function of her left arm and leg, and plans to leave the rehabilitation center as soon as possible. She credits her younger sisters Olivia, Alexus, Layla, and Zuri — who haven’t left her side since the accident — as her motivators.

“We never thought we were going to spend the summer in the hospital, every day,” said Olivia.

When asked about her experience in physiotherapy, Johnson had this to say:

“I learned how to walk up and down stairs. I walked on a treadmill, that was weird. I’m mostly working on my left arm, picking stuff up and putting stuff down, and I’m just ready to go home.

“God is real. Without him I wouldn’t have made it at all.”

Despite her challenges, Johnson will be able to go back to continue her sophomore year at Cy-Ridge in the fall. However, she may have to be homeschooled for a portion of the school semester.

“I’m patiently waiting,” she said. “My summer went down the drain. I got another chance next year.” [4]

The accident seems to have inspired the young teen as she now has new goals for the future. She plans to become a motivational speaker for juvenile delinquents, and feels her purpose is to inspire the next generation.

“I want to be an advocate and talk to juveniles,” she said. “I was a bad kid, and I want to tell them it’s not worth it.”