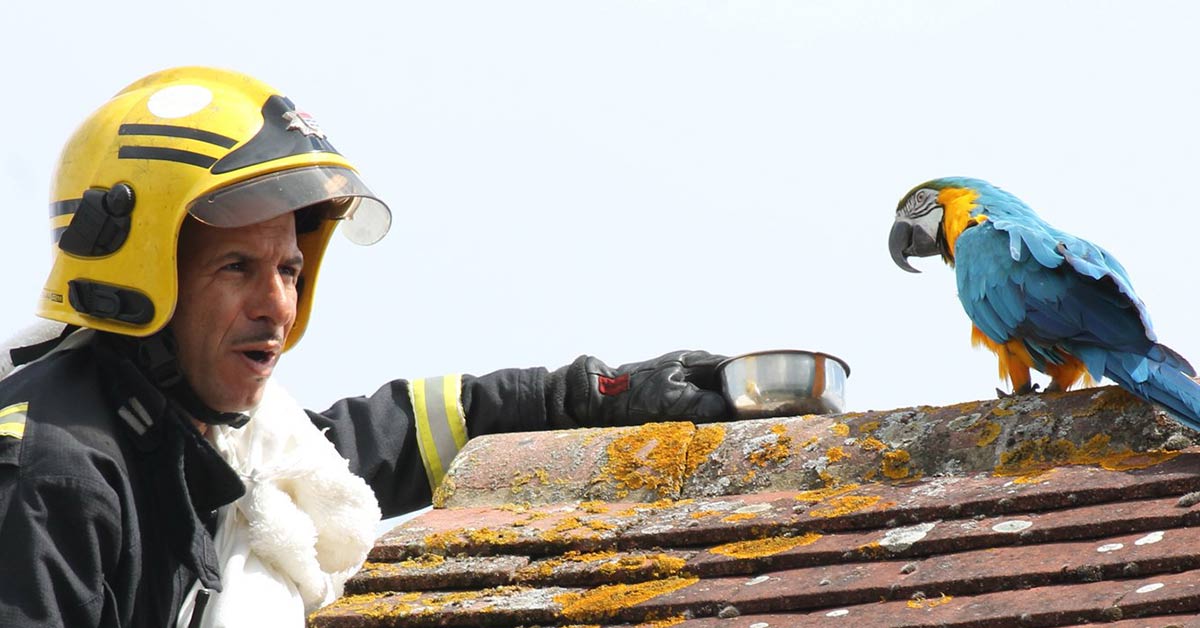 Animals are often incorrigible; they do things very differently from the way humans would and are prone to weird quirks. Take, for instance, talking birds that can mimic the speech of humans but lack the same intuitive understanding of the language that people do.

Firefighters play an essential role in the community; they respond to emergency situations like fires and car accidents, rescue people from dangerous situations, and protect and reduce damage from affected properties.

You would expect that they would be appreciated for the role they play, especially when they’re in the process of rescuing someone, but not everyone really is. Like this parrot, which was stuck on a roof in London and treated firefighters who came to its rescue with some colorful language.

Rescuing a Parrot Who Didn’t Want to be Rescued

Last year, the London Fire Brigade was called to rescue Jesse, a colorful macaw, who had been stuck on the roof of a house in Edmonton. Her owners and the RSPCA had failed to lure her down for three days and were at their wit’s end.

Chris Swallow, the London Fire Brigade watch manager who was at the scene, said, “Jessie had been on the same roof for three days and there were concerns that she may be injured, which is why she hadn’t come down.” [1]

According to a tweet by the London Fire Brigade, the firefighter who attempted the rescue was told by animal experts to coaxed her with the words “I love you” in “an effort to bond with the parrot.”

But the parrot wasn’t having any of that and instead told the firefighters to “f*** off.”

“While Jessie responded ‘I love you’ back, we then discovered that she had a bit of a foul mouth and kept swearing, much to our amusement,” Chris said.

The London Fire Brigade posted the hilarious situation on Twitter:

Parrot owner: To bond with her say ‘I love you’

Firefighter: ‘I love you’

Jessie the Parrot: ‘I love you’

Jessie then turned the air blue & flipped the firefighter the bird. [2]

They soon discovered, through her swearing, that Jesse also spoke Turkish and Greek, so they tried telling her to ‘come’ in both those languages to no avail. Jessie kept ignoring the firefighter’s attempts to coax her back to safety.

In a surprising turn of events, Jesse flew to another roof and then to a tree, removing the owner’s worries of her sporting an injury.

“Thankfully it soon became apparent that Jessie was fine and uninjured as she flew off to another roof and then to a tree,” Chris said.

Thankfully, she was soon reunited with her owners when she flew home on her own accord. Her owner sent the firefighters a video of Jesse thanking them for their help.

In the UK, cases like the one above, which involve an animal needing rescue, are to be reported to the Royal Society for the Prevention of Cruelty to Animals (RSPCA). Chris encouraged people to do the same as Jesse’s owners whenever they see an animal stuck or in distress. [3]

The firefighters are only called in if the RSPCA requests for their assistance to help with specialist equipment.