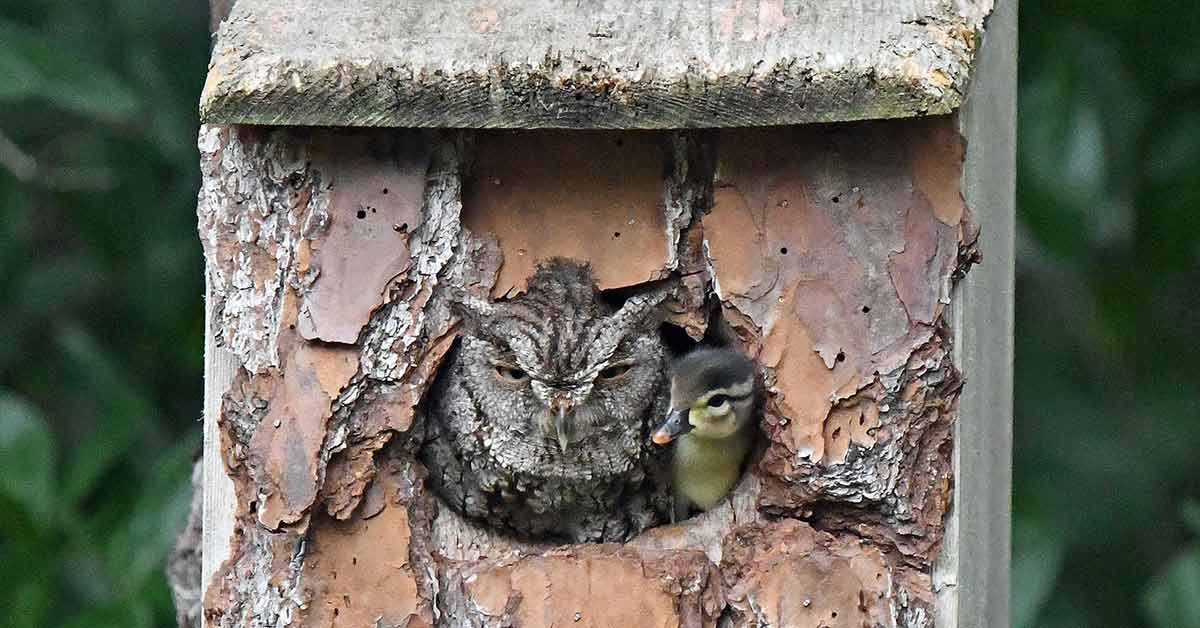 Nature is often whimsical and unpredictable. Just when you think you have a hang on what is possible or probable, it all changes, and you’re presented with something new. Take, for example, this relationship between an owl and a duckling captured side-by-side looking out from a bird box.

In a series of events that sound like something right out of the pages of the next Pixar production, this is a story about the owl and duckling that lived happily ever after. No, we did not make that up, this bizarre real-life relationship has been captured by a photographer from Florida in her backyard of all places.

Laurie Wolf, a Florida photographer, captured the beautiful image of an owl and a duckling living side-by-side. She initially thought the owl was with owl hatchlings of her own, but on closer inspection, she discovered that the cute yellow bird peeking out next to her from their nest mate was, in fact, a little duckling — which the owl was raising as its own.

On discovering the unlikely pair, her first thought was that the predatory owl might end up feeding on the duckling. Wolf, who is a wildlife artist and amateur photographer, consulted a bird expert about the matter, and her worst fears were confirmed.

She was asked to try and catch the duckling so it could be sent to a local wildlife sanctuary. However, as she tried doing so, it jumped out of the box and quickly waddled over towards a nearby pond and hasn’t been seen since. Thankfully, the evidence of the unlikely relationship remains and is sure to spark up conversations about mother nature for years to come. [2]

“I don’t think I’ll ever experience anything like that in my life again,” says Wolf.

Although it’s strange, it is not uncommon to find wood ducks in other nests. Christian Artuso, the Manitoba director of Bird Studies Canada, explains that wood duck birds practice “brood parasitism.”

All living things are wired to reproduce and preserve their bloodline; the wood duck takes this a step forward by not putting all their eggs in one place and often lay eggs in other bird’s nests in the hope that some will hatch.

“It’s not commonly documented, but it certainly happens,” says Artuso.

Artuso recalled a similar incident that occurred in 2007 when an owl sat on and hatched, not one but three wood ducklings.

“You could think of it as not keeping all your eggs in one basket. If you spread your eggs out, then your chances of passing on your genes are increased slightly, especially if you lose your own eggs to a predator.” [3]

He explains that the owl’s supernormal stimuli push them to nurture the egg without realizing that she’s sitting on the wrong eggs. Although it’s impossible to know what a wild owl may be thinking, but, “The parents might be thinking, oh my god! This egg is huge! We’re going to have the best baby in the world!” [4]

As for the Florida duckling, Artuso believes that it may have survived since wood ducklings can become independent quite quickly or join another brood even if an owl hatched it.