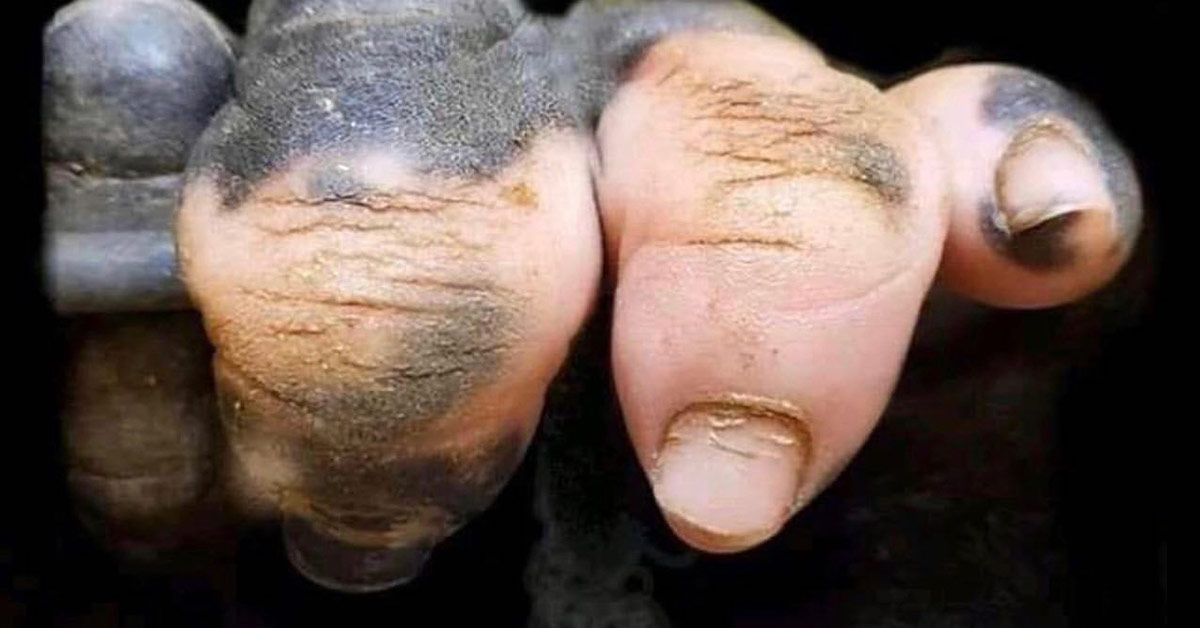 The relationship between humans and gorillas dates back to the period of evolution. Other than sharing about 98% of our genetic code, there are other undeniable physical similarities as well.

Anaka, a Western Lowland gorilla from the Zoo Atlanta, is one unique creature that would stun your eyes. More than once she has been presumed to have vitiligo, a skin condition characterized by loss of pigment on several skin patches, due to the pink pigmentation on her fingers. However, the zoo claims that it is not vitiligo or even a skin condition that requires a cure.

On August 30, Anaka celebrated her sixth birthday, and close up photos of her showcasing her incredibly human-like fingers went viral after being posted on Facebook with several people commenting on her fingers and sharing the pictures all over social media. The photograph even captured the creases on her fingers, as well as her short nails, and of course, the pinkish color, all of which made an almost a replica of a human hand. [1]

Morena Lale, an animal lover, asked the zoo about Anaka’s condition. They responded saying, “Well, her skin pigment has always been like that and hasn’t changed over the years so we think it’s just a cool birthmark.”

According to their website, “She has a unique pink and white pigmentation on her fingers and a very unique personality, often barking at her mum and others to get a prime spot for food and juice. She is often seen riding piggyback on her brother and sisters.” [2]

“You can always pick her out of Taz’s family group because of the unique pink pigmentation on her fingers.” the zoo added. [3]

It is fairly common knowledge that the genetic code of gorillas and humans are very much alike. However, the similarities between them go beyond genes. Most notable is their human-like hands. Unlike most other animals, gorillas and other primates do not have claws, instead they have four fingers, a thumb, and unique fingerprints. They use their nails to open and clean things, as well as for scratching.

Unlike humans, their hands are adapted for a special form of movement called knuckle-walking, a type of movement seen in certain primates where they move on all fours while placing their weight on their knuckles.

Additionally, they have senses similar to that of humans, they maintain family units, and sadly also suffer from the same diseases as humans. [4]

New research on the lineage of great apes

New research shows that humans, chimps, and gorillas all shared a common ancestral lineage dating back to about 10 million years ago. According to geneticist Chris Tyler-Smith, “The big picture is that we’re perhaps 98 percent identical in our sequences to gorillas. So that means most of our genes are very similar or even identical to the gorilla version of the same gene.” [5]

In-depth research has been carried out on chimpanzees and they have been confirmed to be the closest relative to humans. However, recent studies have been done on gorillas to decode their genomic sequence.

The research carried out by a team of geneticists, biologists, and zoologists, led to a comparison between the genomes of the four living great apes: humans, chimpanzees, gorillas, and orangutans. The researchers used DNA from Kamilah, a 30-year-old female Western lowland gorilla from the San Diego Zoo.

The study was not limited to comparing the genomes of great apes; they also studied those of other gorillas so they could determine the genetic differences between various species of gorillas.

Dr. Alywyn Scally, group leader at Human Evolutionary Genetics and an author from the Wellcome Trust Sanger Institute, commented on the research saying, “The gorilla genome is important because it sheds light on the time when other ancestors diverged from our closest evolutionary cousins. It also lets us explore the similarities and differences between our genes and those of gorillas, the largest living primate.”

They determined that while the chimpanzees remain our closest relatives, the human genome is more closely related to those of the gorilla rather than the chimpanzee. [6]

All in all, it is an incredible honor to have a connection with such majestic creatures.