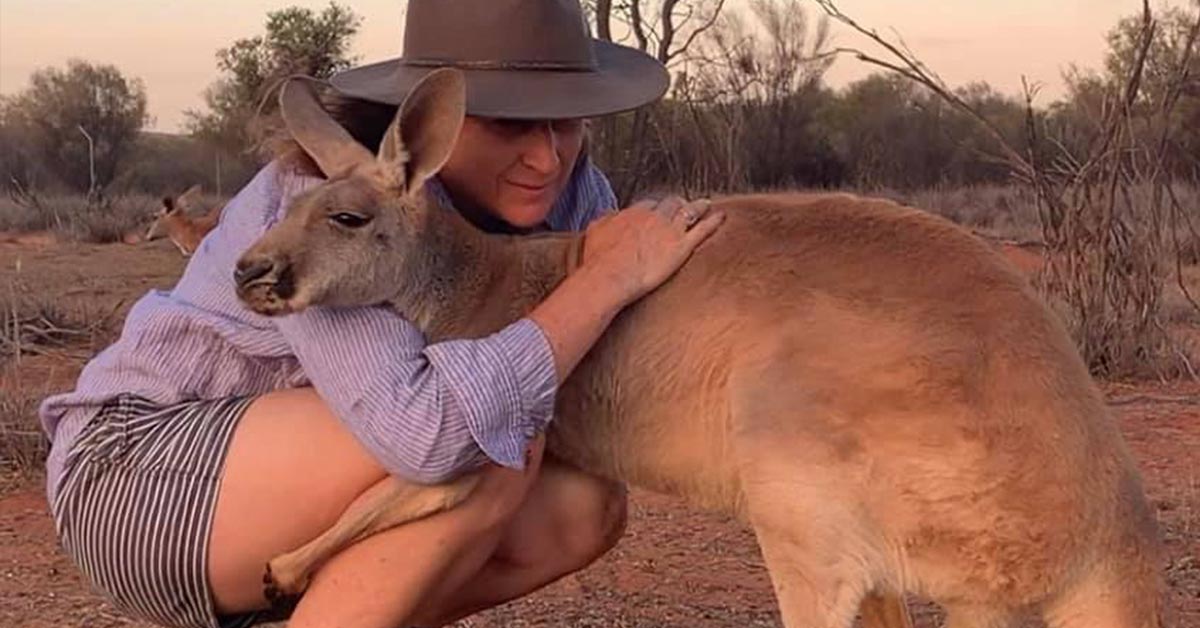 It’s usually humans who get animals into trouble, but sometimes humans get them out of it. Unfortunately, most animals in the wild do not trust humans so it’s not at all surprising to see an animal previously stuck run off once it’s been freed.

But not this kangaroo. Queen Abi is one sweet animal who never misses the opportunity to show her rescuers just how grateful she is.

In 2016, YouTube videos of a kangaroo giving hugs to her rescuers went viral. The 13-year-old female kangaroo, Queen Abi — short for Abigail — was rescued from hunters over 11 years ago. However, kangaroos have long-term memories and can build strong relationships with their caregivers, provided they see them almost daily.

For Queen Abi, her caregivers at the Kangaroo Sanctuary in Australia have become her family. Every morning she gives them a bear hug, kind of like a doctor’s prescription, “one hug every morning forever.” For 11 years, Queen Abi has been doing that religiously. [1]

The video posted on YouTube was captioned: “Kangaroo Cuddles by Queen Abi.” The licensor wrote “Abi, our 10-year-old kangaroo was raised from a tiny baby orphan. She has always loved cuddles since she was a baby.”

In the video, one of the caregivers can be heard saying: “This is Abigail, Queen Abi we call her. She was raised with Roger 11 years ago and she loves a cuddle. She just loves to cuddle into you. First thing in the morning she comes up, wraps her arms around you and says cuddle me. She just loves it, loves the attention.”

He’s saying all that in the background while Queen Abi is seen affectionately cuddling one of the rescuers at the sanctuary. [2] This video is probably one of the cutest and heartwarming videos you will ever see.

Click on the link below to watch the video.

The Kangaroo Sanctuary is located outside of Alice Springs. It is a non-profit sanctuary with 188 acres of land including a rescue center. This sanctuary was established by Chris “Brolga” Barns in 2011 after the Baby Kangaroo Rescue Centre was set up in 2005, also in Alice Springs.

Barns established this sanctuary because of how far away the closest wildlife rescue center was — about 1500 kilometers away. The sanctuary is described as “a 188-acre wildlife sanctuary for our rescued orphaned baby kangaroos and adult kangaroos.”

According to the website, “Our mission is to educate and encourage people to rescue and care for kangaroos and other wildlife and animals. Our motto is ‘Animals Comes First.’”

These animals are simply delightful. They are well cared for by the staff of the sanctuary and are quite eager to give a hug. However, no one does it as good as Queen Abi who was crowned Queen for a reason.

Roger, the other joey Abi was raised with, passed away. Nevertheless, there are other huggers in the sanctuary: Larry and Ralph. Queen Abi however, is the most reliable hugger and never fails to give out her famous hugs.

On their Facebook page, the sanctuary wrote, “Abi was raised from a joey with Roger and Ella… Abi came to me as an orphan of five months old and was quite busted up with cuts and scrapes. Abi has grown into a very healthy 7-year-old and is my only kangaroo who comes up and gives a great big rugby tackle cuddle. Abby is also unusually light in color and I think she is just beautiful.” [3]

This is sadly a booming industry in Australia. Kangaroos are indeed numerous in the outbacks and some people see them as pests. Thus, most locals do not mind the killing of kangaroos for meat, hides, and leather.

They even believe that kangaroo meat is a better alternative to other meat sources. The export of kangaroo products generates about $29 million yearly and has created over 4,000 jobs for people in Oceania. [4]

Threats to kangaroos in Australia

There are two categories of people when it comes to kangaroos. The first are those who see kangaroos as pests and want nothing more than to kill them off. They do not want any damage to their homes, farms, and property from kangaroos. They may employ the use of guns, traps, and poison to get rid of them.

The second are the animal activists who do everything within their power to rescue and protect these animals. Sadly, the first group make up the majority.

Also, kangaroos are affected by accidents with vehicles, and environmental changes such as global warming. [5]

Kangaroo culling, the practice of killing up to a million kangaroos to protect sensitive grassland and other wildlife, also plays a huge role in reducing kangaroo numbers. [6]

Certainly, people can do better in their treatment of these animals. Whether or not humans should be in charge of kangaroo populations remains a controversial topic.

Perhaps, you should take your mind off that and focus on what you can control. For instance, kangaroos raised in captivity have an expected lifespan of around 20 years. The sanctuary provides tours to tourists, so if you would like a hug from the Queen herself, hop on over to Australia and get one now.