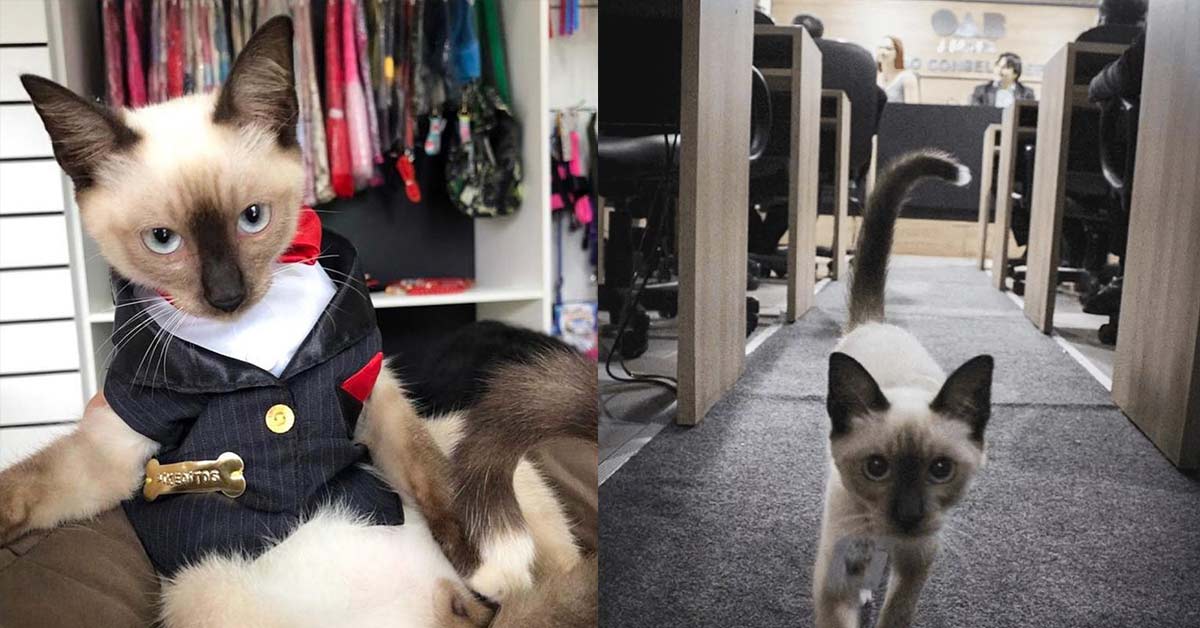 Everyone feels sorry for a cold, homeless cat, but this one cat had his luck turned around amazingly. Not many cats out there can boast of being actual workers, let alone, being lawyers.

Leon was a stray cat who got caught in the rain. The little fella took shelter in the Order of Attorneys of Brazil (OAB) building. The OAB is the Brazilian equivalent of the American Bar Association. Leon was safe and warm in a box where he was kept and fed for a week. Unfortunately, not everyone was bought over by his cuteness. Some people filed complaints about Leon hanging around the reception area. They claimed he was too small and could easily be stepped on. Joke’s on them, because Leon’s name changed from Leon the Cat to Dr. Leon the Lawyer Cat. [1]

It is a law firm after all

What do you expect from a firm full of lawyers? Of course, they’re going to come up with a clever way to save Leon. First, they gave him a job where he had to help welcome people into the building. However, cats don’t make the best doormen, and so he was promoted to ‘lawyer.’

Dr. Jeanette Laredo shared the good news on Facebook. She wrote, “After a heavy rain, this little guy here seeking shelter from the storm went inside the OAB building and decided to stay. Unfortunately, some people started to file some complaints about the fact that at the reception desk there was a stray cat hanging around and trying to make friends with the newcomers. In order to avoid some new complaints, the board gave the solution: Hire the cat as an employee… so, now it’s official this little fellow is responsible for welcoming the newcomers (whether they like it or not).

Yes, Leon did not go to law school, and he didn’t write the bar exam, but he is a lawyer at heart. How else could you possibly explain how good he looks in a tie? He’s probably going to have to fake it till he ‘meows’ it into law school.

They take such good care of Leon

Everyone at the OAB takes good care of Leon. Veterinarians found out that due to his suffering as a kitten, he has an issue with his vocal cords. Because of that, he hardly meows. Everybody loves him anyway. There are several photos of him with Auriney Brito, the president of the OAB. He enjoys spending time on President Auriney’s sofa. Also, it was the president who gave him the job. So, he’s sort of the ‘First Cat’ of the OAB, what with chilling with the president and all. Leon even has a name tag with his cute face on it. [3]

Could it get any better?

Well, yes, apparently Dr. Leon might be getting his own office soon. You could argue that all Leon does is play with toys, but he does some real hard work. After all, being the poster boy for unconventional ways of climbing up the career ladder isn’t a joke. Also, it takes a lot of work to look cute and serious at the same time — a feat not everyone can achieve.

What has Leon achieved so far?

Dr. Leon is quite the celebrity lawyer. He has an Instagram page with over 80,000 followers. According to his representatives, he is dear to everyone, including those who formerly disliked him. And aside from playing with toys and eating all day, Dr. Leon is indeed an influencer.

Also, he has inspired several people to come up with new, cheeky cat puns including cattorney, paw school, pawyer, and legal purrfession. Nothing like good wordplay to make a cute story even cuter.

Because of Leon, an animal rights institute will be set up. The documents to launch it are already in the final stages of processing. The institute will be used to help abused and abandoned animals like Leon was. It will also be used to fund the NGOs in town. And the cherry on top of the sundae is that it will be called “Instituto Dr. Leon.” [4]

Cats are not lazy creatures

A shelter in Spokane, Washington, came up with the idea of helping stray cats find a job. This is much better than the other option of them being caged up or euthanized, as is prone to happen to so many cats living in shelters. The program, Farm Livin’, allows the cats to be what they’re so good at: mousers.

They’re spayed or neutered, vaccinated, and deemed healthy. Then they’re paired with cat lovers who own farms or any property that has rodent problems. The cats then become “rodent managers” or “mousers.” Since its inception in 2009, more than 1,700 cats have been saved using the Farm Livin’ program. [5]

Some are just extra lucky. Choupette — “surrogate child” of the late Karl Lagerfeld, German creative director and fashion designer — is one such cat. Choupette is a fancy cat with her “own little fortune.” Lagerfeld before his death revealed he’s leaving his estimated $170 million wealth to her.

Even without the inheritance, Choupette still is a wealthy cat. She made a whopping three million euros in 2015. In an interview with Lagerfeld, he said, “She did two jobs and made three million euros this year. One was for cars in Germany, and the other was for a Japanese beauty product. I don’t allow her to do foodstuffs and things like that. She’s too sophisticated for that.” [6]

It seems “professional cats” are the next big things. From those who only have to look pretty, to those who work in the corporate world, and those who have to get down and dirty, we’re here for all of them.

Kudos to these domestic cats for changing their narratives. The big cats might be the “top dogs” in the jungle, but out here in the corporate jungle, domestic cats are the kings.