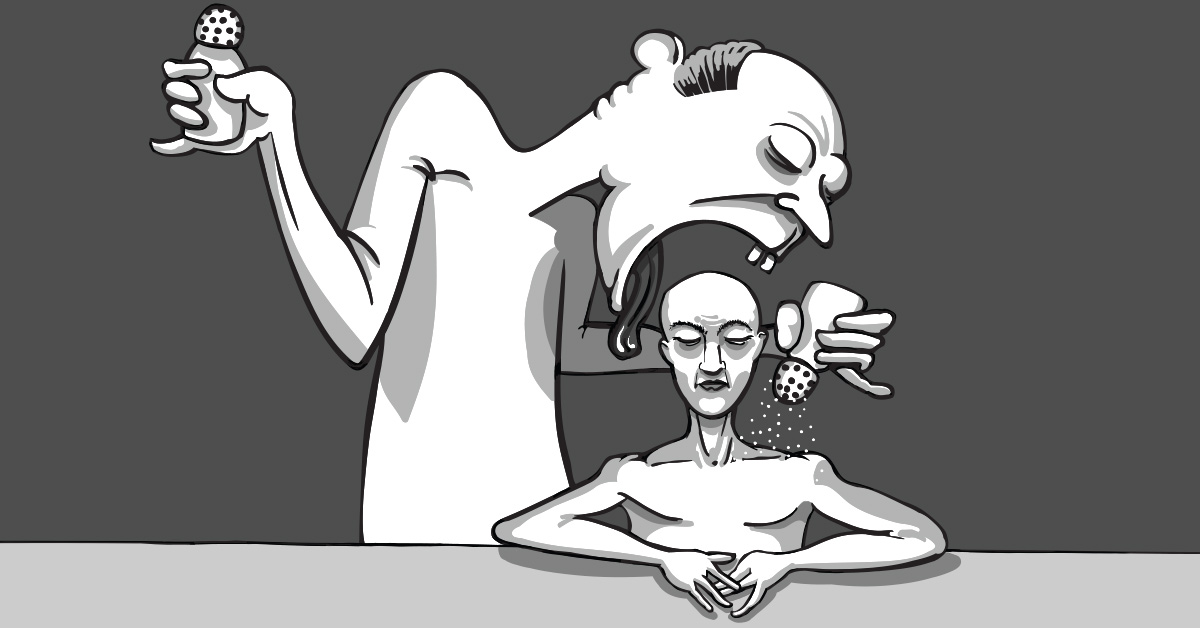 Swedish scientist Magnus Soderlund has come up with a way to “save the human race.” Don’t get excited just yet, it involves cannibalism. Yup, eating human flesh. This is creepy on so many levels; nevertheless, we should understand why this man came up with this idea, and why he thinks it could ever work.

A PowerPoint presentation on cannibalism

While speaking at Gastro Summit in September about food of the future, Soderlund, a professor and researcher at Stockholm School of Economics, said that eating the flesh of dead people could save the human race. He just believes society needs to “awaken to the idea.”

His presentation was titled “Can You Imagine Eating Human Flesh?” Some of the subtopics were “Is cannibalism the solution to food sustainability in the future?” and “Are we humans too selfish to live sustainably?”  He was hesitant but open to the idea of eating human flesh. He genuinely believes that the taboos that surround cannibalism will change over time if people tried it. During the summit, he said, “I feel somewhat hesitant, but to not appear overly conservative. I’d have to say… I’d be open to at least tasting it.”

Soderlund minimizes the wrongness of cannibalism by blaming society for being too conservative and selfish. His argument is essentially that food sources are dwindling and would eventually become scarce. According to Soderlund, people have to think outside the box to get their sustenance. People have to consider their pets and insects, like grasshoppers and worms, as food sources.

And that’s where humans come in. He figures that if human flesh is introduced gradually to society, enough people would eventually be alright with it. What he means by “enough people,” your guess is as good as anybody’s. The behaviorist thinks people could be “tricked” into making the right decision — the right decision here being “become a cannibal.” Yeah, it is just as creepy as it sounds. [1]

Why exactly did he suggest that?

Indeed, the global food supply has dwindled dramatically over the last few years. Climate change and global warming play a part in this. Many scientists and researchers have come up with alternative sources of food for the world. Nonetheless, they typically mean plant-based proteins, lab-grown meat, or genetically modified plants.

Soderlund has provided hardly any information about what people stand to gain from eating human flesh in terms of nutrition and the like. His argument is simply from an economic point of view. Climate change will result in problems such as global warming, greater flood risks, drought and heat waves, which could lead to food scarcity, so we need an alternative. Maybe he gets his inspiration from the age-old dilemma of whether or not you’ll eat your friend when you both are stuck in a boat with no food. Already, we know that once the friend drops dead, this scientist will not hesitate to dig in.

Should we be thankful for small mercies?

At least, he’s not asking us to kill people and eat them. He suggests we eat meat from dead people. On second thought, there isn’t much to be thankful for as this is still high up on the “creepy scale.”

Why you should not be munching on human flesh

Interestingly, Soderlund avoided the topic of the biological effects of cannibalism. This has been extensively studied, and there is quite a cache of data on the topic. The most common effect is the horrible illnesses caused by prions — misfolded proteins that are highly infectious. The prions can cause diseases such as Creutzfelds-Jakob’s disease and Kuru.

Kuru is also known as the ‘laughing death’ or ‘laughing sickness’ due to the pathological fits of laughter that comes with it, along with shivering or tremors and a marked loss of coordination. [2] It is caused by the ingestion of human flesh, particularly human brain tissue that was contaminated with prions.

There was an epidemic in Papua New Guinea in the 1930s. The Fore tribe of Papua New Guinea was severely affected. This was because they believed in eating their dead, rather than letting them decay and be eaten by worms. Surprisingly, the last victim of Kuru died in 2009; that was 10 years ago. Therefore, it hasn’t been that long since people practiced cannibalism. [3]

There are issues other than prions from cannibalism

Isn’t it disrespectful to the dead to chop them up and cook them? What happened to leaving their bodies intact or cremating them and scattering their ashes? Oh well, that’s probably why Soderlund made sure to mention that our “conservative” ways of life will be a huge barrier in this “human flesh movement.”

Also, what if he inadvertently inspires someone to break into the “human flesh industry” and go the extra mile to hunt for fresh meat. Let’s hope that never happens.

How do people feel about Soderlund’s idea?

It might interest you to know that 8% of the audience at the summit raised their hands when asked if they would be willing to try human flesh. The majority of the world population would be repulsed by the thought of eating human flesh and would vehemently refuse to do that. In an online poll by Vice magazine, people were asked if they’d try human meat that was ethically, consensually sourced. Around 75% of the 500,000 responses were “hell no.”

Bill Schutt, author of Cannibalism: A Perfectly Natural History, was asked to explain why the people who said no did so. He gave detailed explanations as to why that happened. The short answer was, “Culture is king, and our culture dictates that cannibalism is that horrible taboo.” [4]

Soderlund, however, has come out to say that he was misunderstood. Supposedly, his point was lost in translation. He said the presentation was “part of a series of investigations into different kinds of food to see where to draw the line.” Eventually, he did say: “But if we need to turn over every stone when it comes to climate and sustainability, it’s still worth raising this question.” [5] Is it? The answer has to be a big NO. Also, his second statement written above is quite contradictory as it pertains to his story about being misunderstood.

That’s enough cringe-worthy discussions for now. Hopefully, we come up with a better way to combat climate change that doesn’t involve restaurant menus like “human flesh burger and chips.”