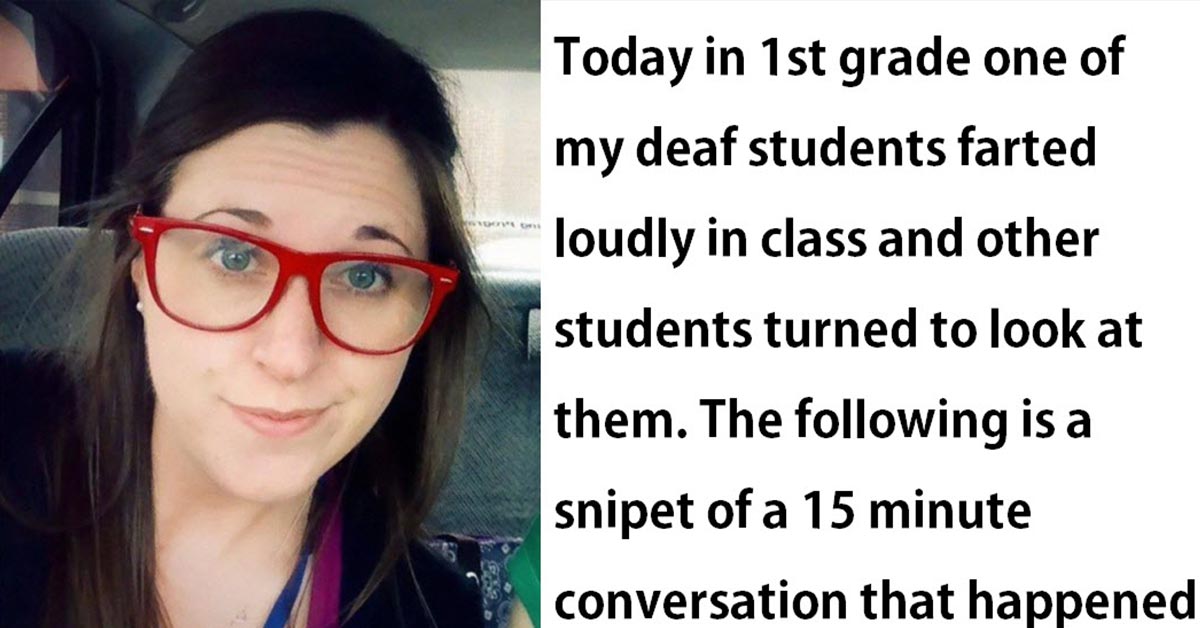 Teachers have a vital responsibility to educate and influence, but that is often overlooked by many. Frankly, you’ll be hard-pressed to find a teacher who doesn’t do more than is strictly stipulated in their job description, just like the one in the story below.

Your high school teacher does a lot more than teach algebra. They are also responsible for evaluating students, lecturing, asking questions, assigning homework, praising or critiquing, supervising and marking examinations, and grading each student at the end of the semester or year.

Being a teacher comes with many ups and downs as it is a profession that exposes you to several hundred “pride and joys” every day. They are continually being faced with many unique situations, like in the case of Anna Trupiano.

Trupiano, a teacher at Kendall Demonstration Elementary School in Washington, DC, shared on Facebook the story of what happened when a deaf pupil farted in her class. Trupiano teaches a first-grade class that includes blind, deaf, and hard of hearing students. [1]

In her post, she explained that after the six-year-old deaf student passed gas loudly in class, his hearing peers began to laugh. Confused by the laughter, the child sparked off a 15-minute conversation that happened entirely in American Sign Language.

The boy asked Trupiano in sign language why his other students were looking at him.

She replied: ‘Because they heard you fart.’

‘Whhhhat do you mean?’ he replied. She responded: ‘Hearing people can hear farts.’

Another kid joined in asking: ‘Wait, they can hear all farts?!?!?!’

Trupiano had to spend the next few minutes explaining to the class in sign language how some farts are silent while others can be heard.

‘Hmm…you know how sometimes you can feel your butt move when you fart? A lot of those they can hear. But if your butt doesn’t move it’s more likely they didn’t hear it,’ she said.

Now totally alarmed, the boy signed: ‘TELL THEM TO STOP LISTENING TO MY FARTS! THAT IS NOT NICE!’

Trupiano then has to explain to the class that farting is ‘healthy’ and that everyone, hearing or not, farts, including their parents. The youngsters were both intrigued and horrified by the stunning realization. [2]

She concluded the post by stating, “I went to college for eight years to have these conversations.”

Her Facebook post has since gone viral and received hundreds of comments from people who enjoyed the transcript of the exchange. The post caught the attention of English-American actress Minnie Driver, who wrote:

“In all the sadness of this weekend, I wanted to share a thread that I know will remind you there is good and laughter and revelation in the world still x.”

Although the discussion was funny, it points to a severe problem faced by children in the deaf community.

“I know it started with farts, but the real issue is that many of my students aren’t able to learn about these things at home or from their peers because they don’t have the same linguistic access,” Trupiano told GOOD.

“So many of my students don’t have families who can sign well enough to explain so many things; it’s incredibly isolating for these kids.”

She hopes that her funny narration about something as basic as bodily functions will inspire others to learn sign language and learn more about the deaf community.

“I would love to see a world where my students can learn about anything from anyone they interact with during their day,” she said. “Whether that means learning about the solar system, the candy options at a store, or even farts, it would be so great for them to have that language access anywhere they go.” [3]

The American Sign Language is a unique, natural language that is similar to spoken language but with a different grammar structure. It is used by many deaf and hard of hearing people since it enables them to communicate by moving their hands and faces.

Parents of deaf and hard of hearing children are encouraged to expose them to sign language as soon as possible to help them communicate effectively with their caregivers. [4]