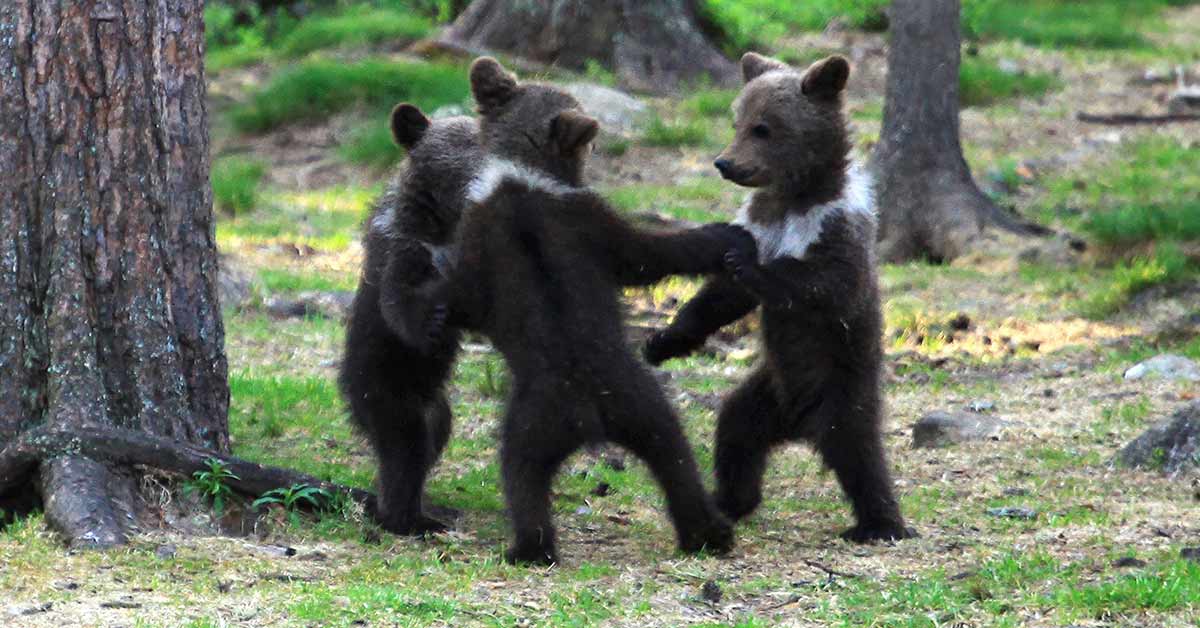 If there is anything you can definitely bank on, it would be nature’s ability to surprise us. Once in a while, we hear magical stories that leave us gasping in amazement, and this one is no exception. In what looks like a scene from a fantasy movie, a teacher come-photographer has captured a trio of bears cubs dancing. Yeah, you read that right! And it is the most adorable thing you would ever see. Whoever said animals couldn’t dance needs to see these pictures.

Valtteri Mulkahainen, a physical education teacher, has been devoting a lot of his free time to photography. For the past six years, he has been shooting wildlife in his country and capturing beautiful memories through his camera lens.

On the third of June 2013, while exploring the Finnish taiga around Martinselkonen, Valtteri came across this beautiful scene.

“I photographed the cubs with the bear all evening and all night. The cubs behaved like little children. They were playing, and even started a few friendly fights. I felt like I was on a playground in front of my house, where small children frolic around. That’s how much they reminded me of little children. At one point, the three of them got up on their hind legs and started pushing each other. It was like they were dancing in a circle,” Valtteri told Bored Panda. [1]

Standing at a shelter in the forest, he put his camera to work and captured the amazing photos of the three bear cubs seemingly dancing in a circle, with the mama bear sitting a small distance away. “I photographed the cubs with the bear all evening and all night,” he said.

The cute photos which were shared on Instagram with the caption “Learning to dance in a circle” have garnered a number of likes, shares, and comments. Many users could not stop gushing at how adorable the pictures of the bears are.

“OMG! What wonderful, magical photos. I love that they were ‘dancing.’ This is the time when you see these cubs and know that the world is a beautiful place. Thank you so much for sharing,” one Facebook user said.

“Hello Valterry! Please tell me – how are you not in fear of these huuuge bear-parents, standing at the distance of 50 meters from the kids. They can reach you in a jump & make literally a chop from you..Do you speak Bearish?” one Instagram user asked. [2]

Bears are carnivores that belong to the family Ursidae. Depending on the species, bears can be about four-eight feet long and can weigh between 60–1000 pounds. They have short tails, non-retractable claws, and an excellent sense of smell, which makes it easy for it to retreat on detecting human activity. [3]

Bears are commonly found in South America, Asia, North America, and Europe. Together with Romania and Sweden, Finland makes up the top three habitats for brown bears in Europe. Except for the Åland Islands, bears can be found in just about any location in Finland. It is, therefore, no surprise that Valtteri was able to come across the three bear cubs.

Bears are capable of hibernating to conserve food and energy during winter. This effective survival solution will see them lower their body temperature, respiration, heart rate, and metabolism. In fact, black and grizzly bears can survive for over 100 days without defecating, drinking, urinating, or eating.

Currently, the bear population in Finland is estimated to be between 2,020 and 2,130.