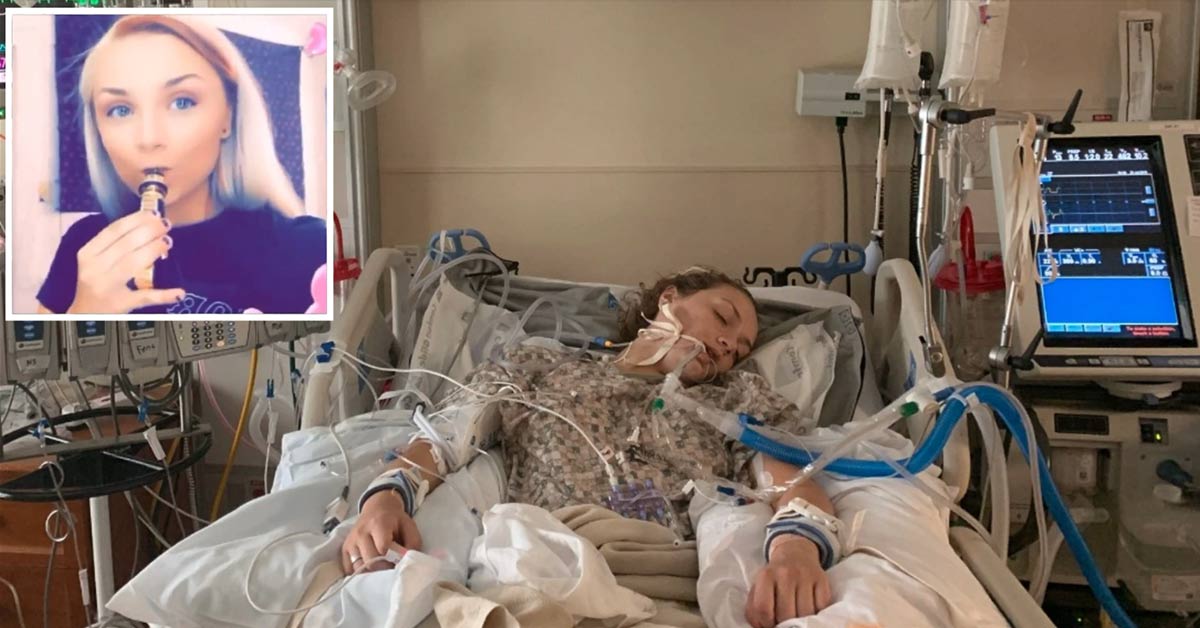 Eighteen-year-old Maddie Nelson from Utah discovered vaping when she was 15, and she vaped every day until a couple of months ago. The previously healthy teen was suffering from backaches and mild pain in her kidneys, but on July 27th this year, her symptoms became so unbearable that she had to be hospitalized. [2]

The dangers of vaping does not end with e-cigarette explosions, an issue that has claimed several lives in recent times. [1] Maddie’s case proves that vaping is not such a safe substitute to traditional smoking after all.

With a sky-high fever and severe angina, Maddie was put on oxygen to help her breathing problems but it didn’t help. Her life became critically endangered when an emergency x-ray showed that her lungs were severely damaged and inflamed, which caused the ineffectiveness of the oxygen.

A coma for three days

Since she couldn’t breathe on her own or receive oxygen from a tube, the doctors had to place her in a medically-induced coma for three days. After two bronchoscopies, she was diagnosed with Acute Eosinophilic Pneumonia, a type of lung disease where eosinophils (a type of white blood cells) appear in the lungs and usually in the bloodstream. The white blood cells build up in response to inflammation.

The most common causes are cigarette smoke, certain kinds of antibiotics, and fungal infections. Symptoms include coughing, shortness of breath, and respiratory failure. The poor girl had been enduring the symptoms as the cells built up slowly, until her lungs could not hold up any longer.

“Her doctor suspects it’s from electronic vaping sources; this includes all supposedly ‘safe’ alternatives to smoking such as e-cigarettes,” Maddie’s sister, Andrea wrote on her GoFundMe page.

“Due to her results, doctors decided to give her a regiment of steroids to help combat inflammation. Within 24 hours, she showed dramatic improvements; the medical staff was shocked and thrilled,” Andrea wrote.

Maddie has been recovering gradually ever since. She quit vaping.

Maddie urges people to toss their e-cigs and vape pens

Maddie is still in the hospital, breathing on her own with help from a pulmonologist. She occasionally experiences tightness in her chest and oxygen has to be administered to her. From her hospital bed, she shared photos of herself hooked up to countless tubes and machines, urging people to save themselves from vaping while they still have a chance. It could have been anyone.

“I am sharing my story so you all are aware that there is something crazy in these pens that is not safe and almost cost me my life. I used to just tell myself it won’t happen to me, but it can and will happen to you too… Take my advice, don’t smoke, don’t vape. #vape #stopthevape,” Maddie posted. [3]

Maddie’s GoFundMe page was created on August 4th, 2019. So far, in almost two months, they’ve only managed to raise $500 out of a $20,000 goal for her recovery funds. Let’s show some love to Maddie and her family.

Vaping is not the safest bet. Abstinence is.

Vaping is most popular among teenagers even though e-cigarettes are not supposed to be sold to persons under the age of 21 (18 in some states). [4] Vapes (and JUULs) were initially marketed as the safe alternative to tobacco cigarettes. However, no less than eight deaths and 500 cases of lung disease have occurred as a result of vaping. [5] Statistically, vapes may be safer than cigarettes based on exposure to fewer toxic chemicals, but it’s not nearly safe enough. Even though vaping does not erode the lungs with toxic smoke, the aerosol and vapor can cause just as much damage and inflammation due to varying compositions of the ingredients.

An e-cigarette is made of a rechargeable lithium battery, a vaporizing chamber, and a cartridge that contains the e-cig liquid. The liquid consists mostly of propylene glycol, glycerin, nicotine, flavorings, additives, different amounts of contaminants, and other potentially harmful substances.

The FDA, CDC and other health agencies are currently investigating how vaping can lead to lung disease and other respiratory problems. The long-term effects are not fully known, but vaping is not the so-called safe alternative to smoking everyone thinks it is. These devices are not actively regulated by the FDA, giving a lot of vape pens brands the freedom to manufacture their products with any desirable compositions. The typical levels of nicotine used by various brands range from 0mg/mL, 3mg/mL, 6mg/mL, 12mg/mL, to 18mg/mL. There could be concentrations as high as 24mg/mL and 36mg/mL in some liquids. [6]

According to a study conducted by scientists at the University of Birmingham, vaping causes the same damage that would be found in the body and lungs of regular tobacco smokers. [7] The aerosol from an e-cigarette can disable the key protective cells in the lungs that keep the air spaces free from harmful substances. Data from their study of eight non-smokers with no lung diseases showed alarming levels of inflammation after e-cigarette liquids were administered.

“Our work clearly shows that vaporized e-cigarette fluid is toxic to living cells, increases the production of inflammatory chemicals, and inhibits the function of cells that are key to the immune system,” said Dr. Aaron Scott. “Importantly, we found that exposure of these cells to e-cigarette vapor induced many of the same cellular and functional changes in function seen in cigarette smokers and patients with COPD chronic obstructive pulmonary disease (COPD).

“While further research is needed to fully understand the effects of e-cigarette exposure in humans in vivo, we suggest continued caution against the widely held opinion that e-cigarettes are safe.”