Princess of Whales: The Incredible Story Of The Female Scientist Who Tried To Tame Belugas In The Freezing Waters Of The Arctic While Naked 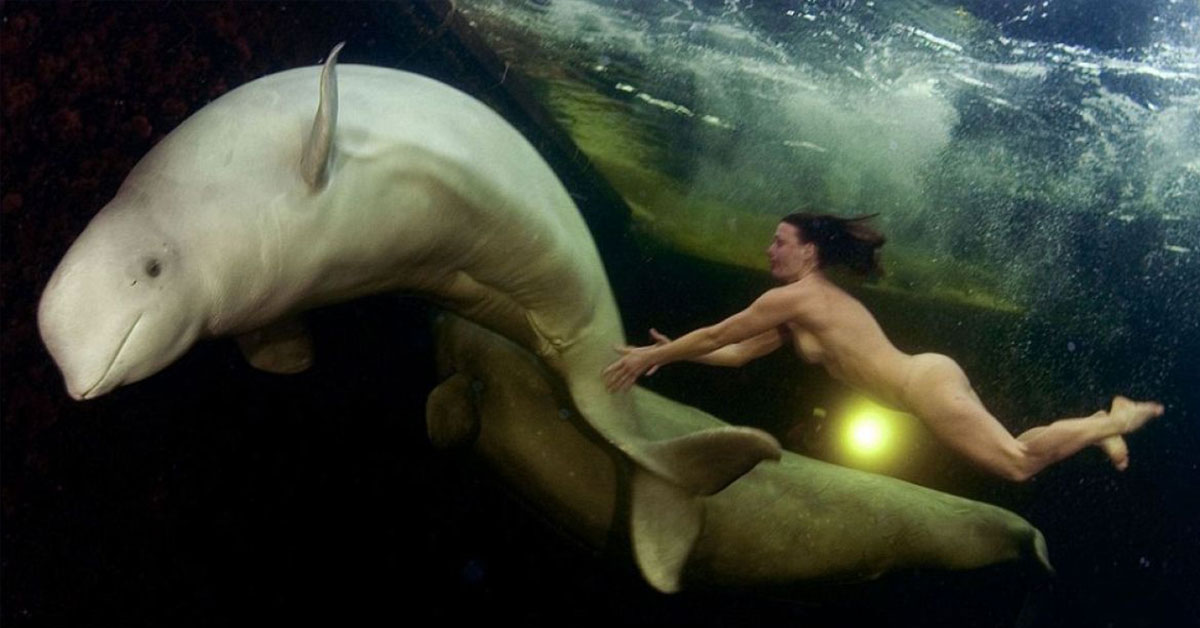 In a unique albeit controversial experiment by the Arctic Circle branch of the Utrish Dolphinarium to tame wild beluga whales, this lady plunges into the freezing water to do the “taming” while naked!

Well, certainly not Natalia Avseenko. The 36-year-old scientist decided to strip naked before getting into the cold water because marine experts believe that belugas detest being touched by artificial materials.

This happened in the Murmansk Oblast region of north-west Russia, at the shore of the White Sea, close to the Arctic Circle branch of the Utrish Dolphinarium. This area of the sea is blocked off to prevent whales and dolphins from escaping before instructors tame them enough to be transported to dolphinariums all over the world.

Why go naked and how does she survive the cold?

Avseenko does this to increase her chances of forming a bond with the mammals. Belugas have a small bump on their heads used for echolocation, and supposedly the clothes will be a barrier to the scientist forming a tight bond with them.

The United States Search and Rescue Task Force has found that when hypothermia might set in a person submerged in water 32 degrees or below in about 15 minutes or less. However, Avseenko can stay underwater for a whopping 10 minutes and 40 seconds. [1]

So, how does she do that? Is she cold-blooded? Does she have gills? That’s a ‘no’ to all of these questions. She’s simply a yoga expert who uses meditation techniques to hold her breath.

Whatever the reason, the whales — Nilma and Matrena — don’t seem to have any qualms about her swimming with them in the nude. [2]

A video lecture on the entire experience was made by Avseenko.

She described the entire process of her swimming into the cold waters of the Arctic circle without thermal protection and free-diving beside the incredible white whales. The talk which was given at a TEDx event was independently organized by a local community.

According to Avseenko, growing up, she had a kidney disease and would easily get sick whenever she got cold water in her shoes. It also didn’t help that she was claustrophobic. Eventually, she realized that all her health problems were connected to hidden fears which “were inside her subconsciousness.”

During the lecture, she described the experience saying, “Imagine that millions of needles got into your body, into your bones, into your skin, into your cells, and you have a shocking spasm in your body, and your heart stops for milliseconds, and you’re absolutely helpless there. And you’re trying to breathe, but there is no way to do it and you’re just shocked… It was just shocking.”

However, she believes it is her story of how she redefined the limits in existence. She then advised the people present not to repeat her actions, as they are unique, and should instead write their own stories. [3]

In an interview with extreme sports blog Ant Williams, Avseenko said, “My Polar Circle story was a spiritual one. I tried to see how my concepts of open mind and heart, of ‘inner-smile,’ work in extreme conditions, and how they can help people in their everyday lives. We can see how they really work. I had a great experience at the White Sea. We wanted to see what would be the reaction of Beluga whales to a human being who is vulnerable in front of nature and society.” [4]

Will there be a repeat of this experiment at other places?

For now, it is unlikely. For instance, at Saudi Arabia Red Sea Research Center in Thuwal, on the Eastern shore of the Red Sea, the center is dedicated to understanding the sea and its creatures. The marine biologists intend to carry out in-depth studies on the whale sharks that are over there, as well as their potential connection with those outside the Red Sea.

Irrespective of the deep sea nature of the study, there will be no need for any naked divers, unlike at the Arctic circle.

These highly social whales don’t always have it is easy. Described by ukwhales.org as “Beautiful and expressive, beluga whales are known as the canaries of the sea. But like the fate of many a songbird, belugas are continually exploited and held captive for human entertainment.” [5]

The whales live in the cold arctic and sub-arctic waters. Also known as white whales, they can grow up to 16 feet long and weigh about 3,150 pounds on average. Perhaps one of the most interesting things about these whales is their ability to change their facial expressions. Sometimes they appear to have a smile or frown on their faces. This is due to the ability they have to change the shape of their foreheads and lips, thus creating the semblance of a range of facial expressions. [6]

The subject of deep-sea creatures being captured and kept in aquariums has been a controversial one.

A video footage of the Srednyaya Bay in Russia showed 11 killer whales and 87 beluga whales locked in rectangular sea pens. The mammals are all captured and set to be supplied to aquariums all over the world. There was outrage over the video and the pens were termed “whale jails.” National Geographic described the scene as the animals “languishing in freezing waters and legal limbo.”

The horror of the footage shook the world as several professionals describe the situation, with all commenting on how the mammals will most likely die if they remain there.

Fortunately, on April 8, 2019, the Russian government and two American NGOs announced that all of the whales will be released into the wild. [7]

Indeed the story of Avseenko and the two cetacean friends is an incredible one, if you had to go by the smiles they had on their faces. It shows just how far humans can go with animals if we get rid of the guns and nets, but perhaps with a little more clothing.