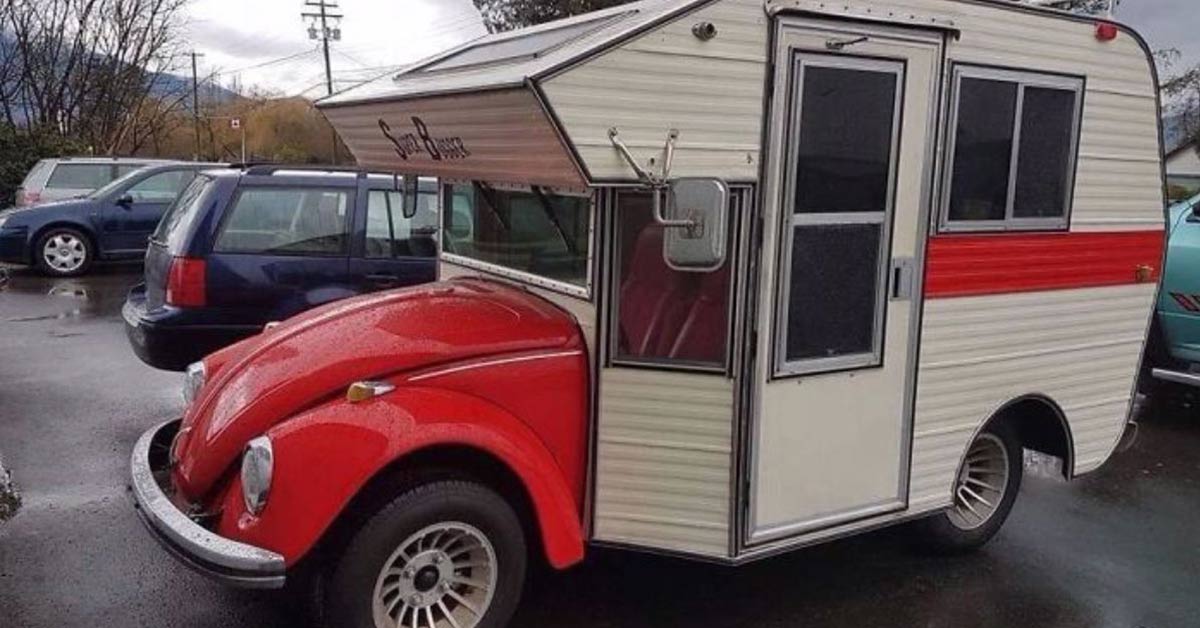 The Volkswagen Beetle is a car with an unmistakable identity. The iconic Beetle with its retro style is a present reflection of the past. Perhaps, the most iconic product of the Volkswagen brand, the vehicle is best known for its unique and petite figure. Despite the appropriate nature of the name Beetle, a new dawn arrived and great changes were made to it.

Often used to navigate city streets and go on short trips due to the rather small form, car owners felt the need to challenge the Beetle. They came up with an idea that would eventually take the Beetle further away from home. This idea was essentially a cross between a Beetle and an RV, and is known as the bug camper. [1]

Origin of the bug camper

The Beetle-RV hybrid was the result of brainstorming by a third-party company, Costa Mesa, California where the vehicle was constructed and assembled. They intended to build a car that had the savvy design of the Beetle but with the comfort and space of a microbus.

They made use of fiberglass paneling to construct a tiny living space between the two front seats. Not a full-size RV; the interior provides little space for not more than a few seats, a small dining area, a kitchen (2-burner stoves and sink), and some storage space. There is a pullout bed tucked into a tiny space above the cab. But because it is a little tight on the inside, most people prefer to use outdoor tents for sleeping and therefore ditch the bed.

Other facilities within the camper include an icebox, a water tank, a cupboard, and drawers. The interior design is also nice with faux wood paneling and shag carpet.

The ‘Super Bugger’ as it is often called is so different from the original Beetle, yet so similar. Each of the parent cars is essentially the same, however, the combination of the Beetle and RV makes it appear so foreign.

Also known as the ‘Lil’ Bugger’ or ‘MiniHome’, the vehicle needed a microbus engine to be placed under the Beetles hood. This was to enable it to sustain highway speeds that reach up to 50–55mph.

They also cut the Beetle off at the windshield and built the camper on top of its floor pan, which they reinforced to withstand the weight. Other than that, the two cars remained the same.

From the 30s when the original design of the Beetle was birthed to the inception of the Super Bugger in the 70s, this car has always been a small (or not so small, at least in the case of the camp bugger) dose of delight.

The Super Bugger when it was created in 1975 was sold for $6,000 — roughly $32,000 in today’s economy. There weren’t many people who bought or got one custom-made for them, however, the few who did take great pride in it. The vehicle was never sold via Volkswagen, but third party mechanics were able to build customized versions of it.

A particular couple, Keith and Glenns Spelrum, are the proud owners of a turquoise super bugger. They showed it off at a 2016 summer car show. According to Keith, the company that built the car for them used a 1968 model for the design. They needed a distinct axle for the car and that was the last year the other company used a swing axle assembly method for their cars. While the Spelrums don’t use the bugger for its intended purpose as a camper, it is a great conversation starter for them. [2]

The bugger made it to the cover of the popular Mechanix Illustrated magazine.

Also, at a car show of over 1,000 cars, it garnered the most attention from people.

According to Riley of Robert Q Riley Enterprises, Engineering Consultants in Chandler Arizona, “Driving a MiniHome is an addictive experience. Acceleration and cornering are much like the original VW. But one does have to negotiate a few trial turns to gain confidence in its roll stability. MiniHome is much more stable than it looks. After a few minutes behind the wheel, the pleasure of driving such a small vehicle, in comparison to other RVs, begins to take effect.”

What’s up with the Volkswagen Beetle?

For a car that was commissioned by Adolf Hitler to provide low-cost transportation for the people of Germany, the little car has spent decades driving through the roads of the world. Due to increased demand in the US in the 60s, the company was prompted to build its first manufacturing plants in North America.

Now, some 70 years later, the plants located in Puebla, Mexico, were shut down in 2019 as the Beetle was discontinued. [3]

The spectacular vehicle with its round roof and back engine will not be forgotten in a hurry. As for the Super Bugger, it will be a welcome sight if more of it is seen on the road…oh, what a sight that will be — truly one for sore eyes!